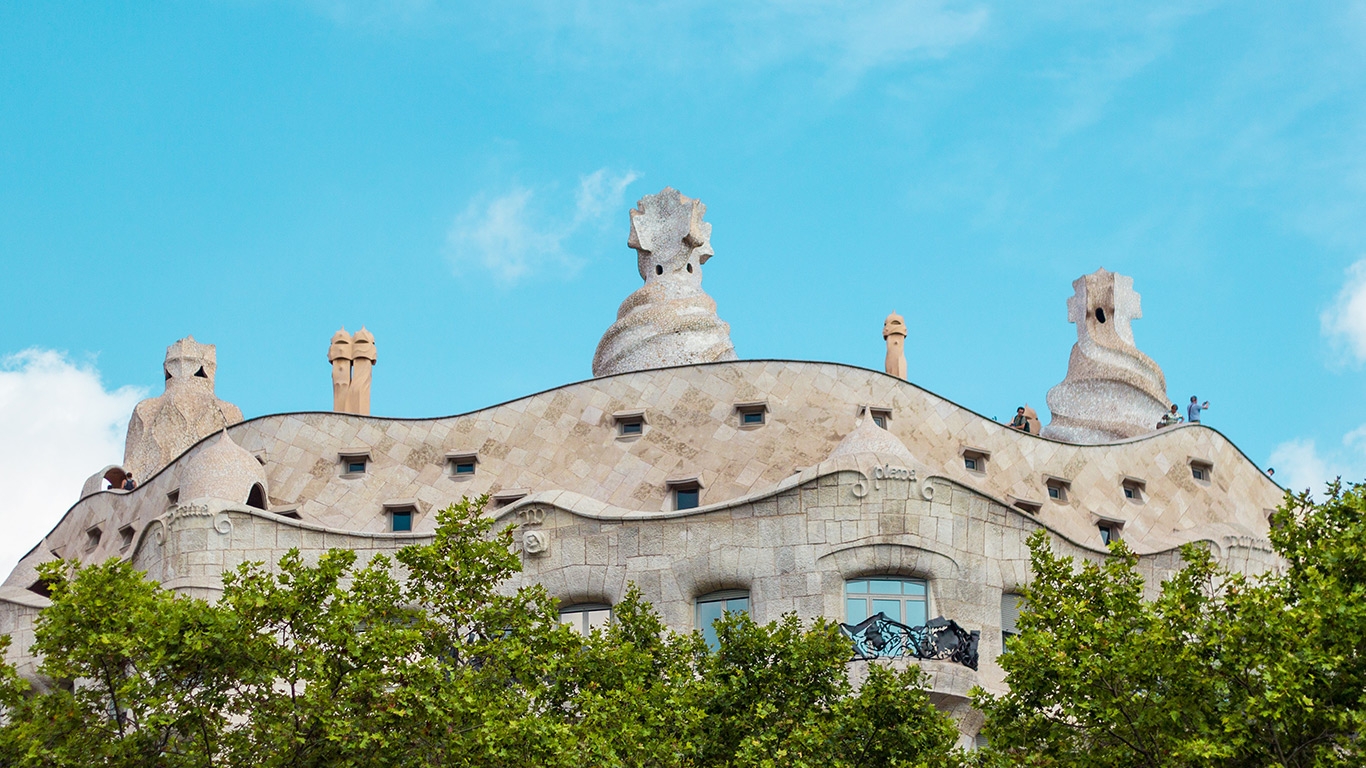 Antoni Gaudí is one of the most celebrated architects of all time. Every year, Gaudí’s buildings attract millions of people across Spain, entrancing them in kaleidoscopic lines and mind-bending ornamentation. For Gaudí, nature was paramount. “Originality exists in returning to the origin,” he once explained—nature’s form and force were the source of all knowledge and inspiration.

As a man of great faith, from a young age Gaudí became obsessed with the mechanics of nature, equating it’s meticulous study with a kind of worship. To quote the well-known podcast 99% invisible in their recent exposé about the architect: “He seemed to absorb essential lessons from the patterns and shapes he saw in nature. A dried out snake’s skeleton, a snail, a honeycomb— these were nature’s perfect constructions. And for Gaudí, a deeply religious catholic, God was the master architect of these flawless organic structures.”(1)

Taking reference from Oriental art, Moorish design, and the Catalonian Modernisme movement, Gaudí’s architecture can be summed up as a sinuous Garden of Eden fairytale. His architecture breathes and flows like a tangled organism—a world of curvaceous expansion, phototropic lines, and éclat design. The ornament draws you in, the grand patterns make you linger.

His architecture breathes and flows like a tangled organism—a world of curvaceous expansion, phototropic lines, and éclat design.

As Carolyn McDowall described: “Gaudí’s unprecedented juxtapositions of geometric masses animated by patterned bricks, stone, ceramics and metalwork all respond to his ideas about how the chaos of nature and the word of God came together.”(2)

Observing Gaudí’s work is like being let into a whimsical utopian fractal, a world beyond rigid society. Although definitively captivating on a surface level, Gaudí’s process went deeper than merely imitating nature. He made sure to study the natural forces driving wild growth—phototropism, gravity, erosion, etc. Gaudí’s columns tilt, his walls warp, his decorations are like organic geometry carved with Mother Nature’s tools. 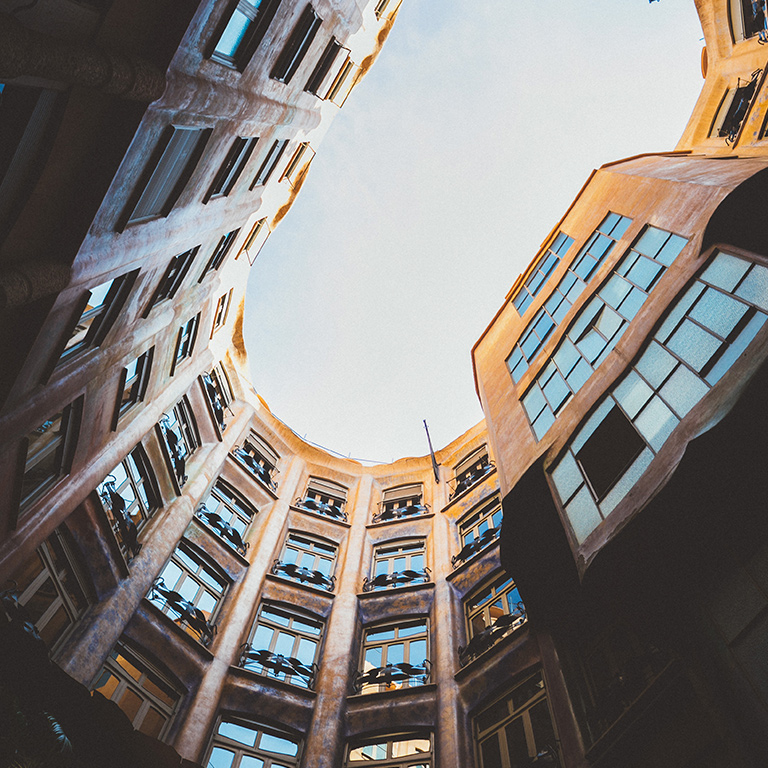 Gaudí never considered his work to be genius, thinking of himself as a vessel through which the wisdom of creation flowed. “Nothing is art if it does not come from nature,” he once said, bringing the forests back to the man-made sanctuaries, urging the public to return to their source.

In applying nature’s solutions to architectural and design problems he faced, if Gaudí produced work today, it would be considered a form of biomimetic architecture on both functional and aesthetic levels. Although a modern term, biomimicry is simply defined as “an approach to innovation that seeks sustainable solutions to human challenges by emulating nature’s time-tested patterns and strategies.” (3) Despite the century’s difference in terminology, this approach truly defined Gaudí’s process. 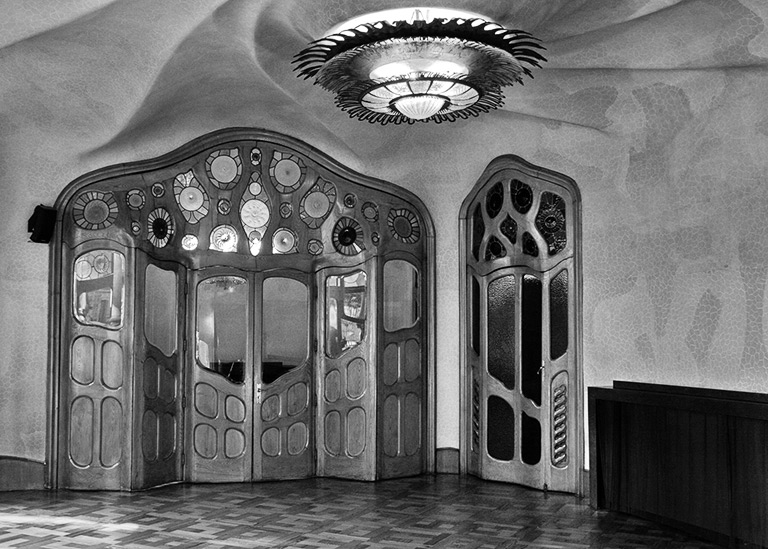 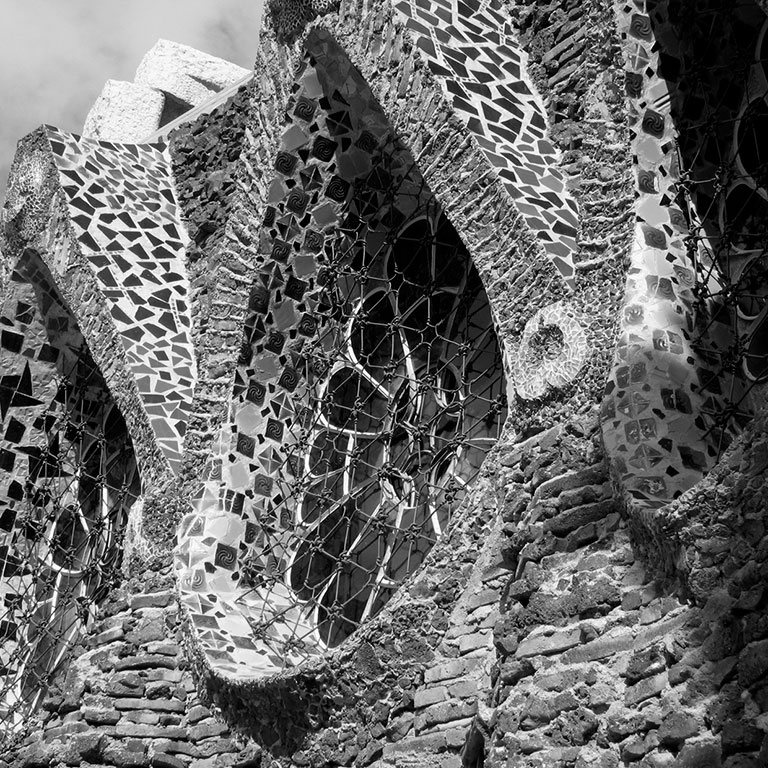 Observing Gaudí’s work is like being let into a whimsical utopian fractal, a world beyond rigid society.

It is easy to see the surface mimicry in the detailed ornamentation—honeycomb gates, nautilus murals, vine-inspired friezes, pinnacles as pyrite crystals. But upon further observation, you begin to wrap your mind around the massive structural components lending themselves to organic form—catenary archives, spiral stairways, conoid-shaped roofs, and tree-inspired columns. (4)

The complexity of these shapes, forms, and structures are still being studied and expanded by biomimetic architects and scientists today. Without modern-day technology, Gaudí tested his bold ideas on complex model systems –with levies, weights, bits of string and clay molds.This system for pressure-testing the physical limits of design replicated physically what architectural software began calculating in the advent of computers.(1) 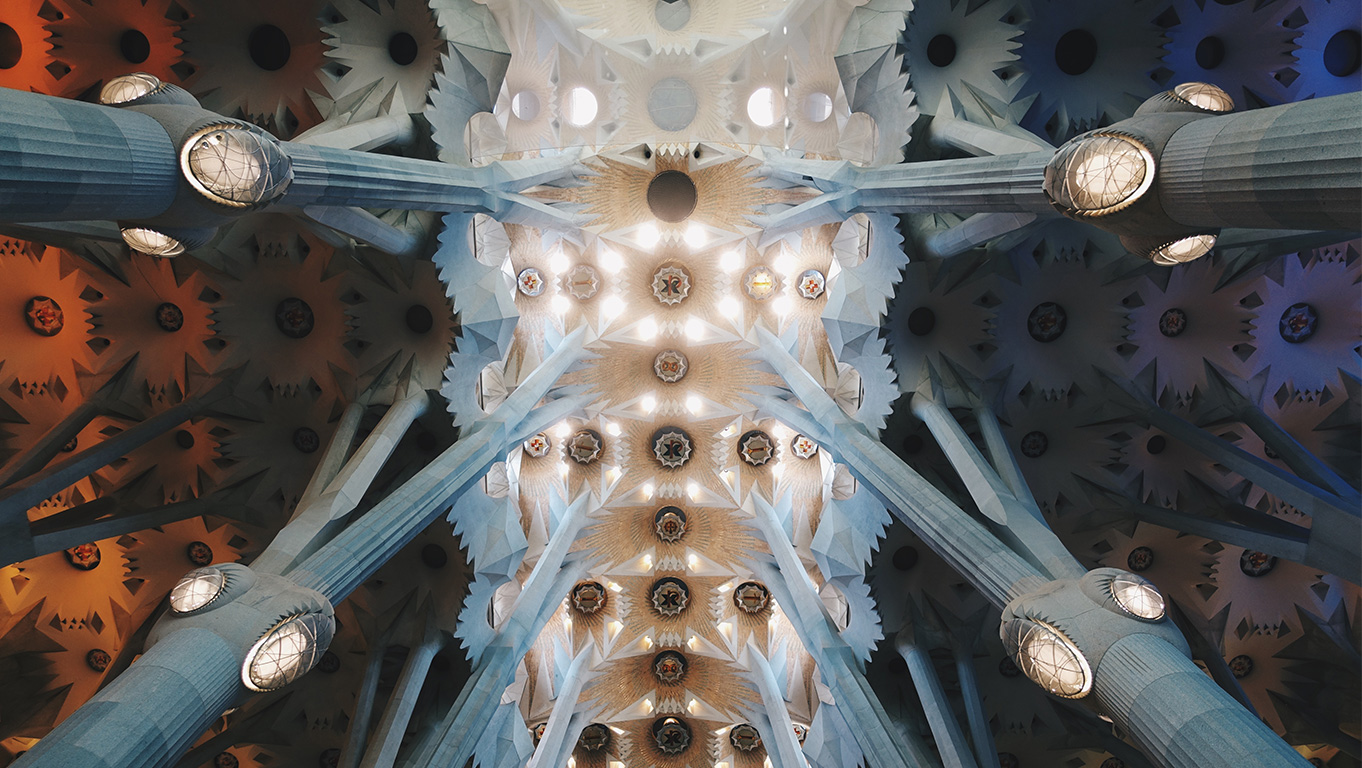 Today, biomimetic architects are focused on utilizing nature’s intelligence with the goal of designing passive systems to reduce our consumption of precious resources. “We have to make buildings that do more, using less… The example of where that works the best is nature itself,” says Dr Rupert Soar in a piece by the BBC.(5)

While Gaudí may not have designed with the intention of reducing resource consumption, his structures are inherently ‘lighter,’ with the natural curves in the roof instilling a strength that demanded less material and tree-inspired columns capable of carrying heavier loads with smaller diameters. (4)

In his TED talk about the biomimicry, Michael Pawlyn describes: “You could look at nature as being like a catalog of products, and all of those have benefited from a 3.8-billion-year research and development period. And given that level of investment, it makes sense to use it…If we could learn to make things and do things the way nature does, we could achieve factor 10, factor 100, maybe even factor 1,000 savings in resource and energy use.”(6)

Though Gaudí lacked an overt ‘sustainability’ agenda, being a part of the Modernisme movement meant rejecting bourgeois values, condeming the consumptive waste generation instigated by excesses of the Industrial Revolution. Peppered throughout history we see great artists and thinkers creating work in response to the expansions of technology and its effects - resource consumption, pollution, denegration of nature. In essence, Gaudí's famous fundamental tenant of ‘returning to the origin’ has been a recurring theme through centuries of environmentally-conscious movements—think Romanticism, Environmentalism, Sustainability, Biomimicry, even American Bonsai.

All of these movements have been founded on a call to action, a demand for humans to bring nature to the societal forefront so it may be recognized and respected as the source of all creativity and existence. It’s about about cultivating a synchronicity with yourself, the cultural forces shaping you, and the natural forces shaping your culture.

Bonsai can be understand as a microcosm reflecting this tension—boiling down the most basic components of modern day humans’ relationships with nature: a tree, a human, and all the cultural space between.

Bonsai coalesces art, science, and the human experience into a constantly evolving, intelligent living form—Gaudí would have been a big fan.

Bonsai a conversation about curated versus wild, tradition versus avant-garde, dominion versus communion with nature. And the deeper you explore, the more you understand the vast mechanisms of sentience and intelligence at play with seemingly inert natural systems. 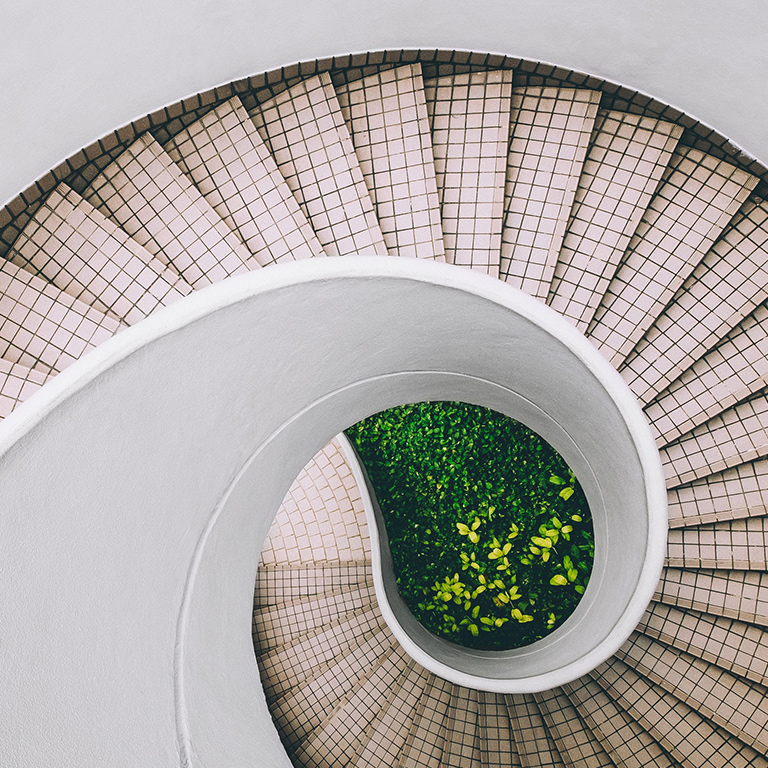 Many practitioners can attest to the fact that bonsai is like a drug—they become absolutely obsessed with their trees, feinding for a deeper understanding of its quiet brilliance. Working with a living medium is an immensely grounding and sacred practice. These trees are not simply a blank canvas for you to splatter, the trees speak back to you. Bonsai can be viewed as the truest culmination of the core ideas expressed through Gaudí’s work – get back to nature, use its intelligence to inform your process.

Bonsai artists are essentially biomimetic scientists on a micro-scale. By way of observation and experimentation, they constantly study trees’ solutions to environmental challenges. Bonsai artists are organic architects of these amazing, containerized worlds—eliminating the conduit, using nature itself as the building block and source of creation. Bonsai coalesces art, science, and the human experience into a constantly evolving, intelligent living form—Gaudí would have been a big fan. 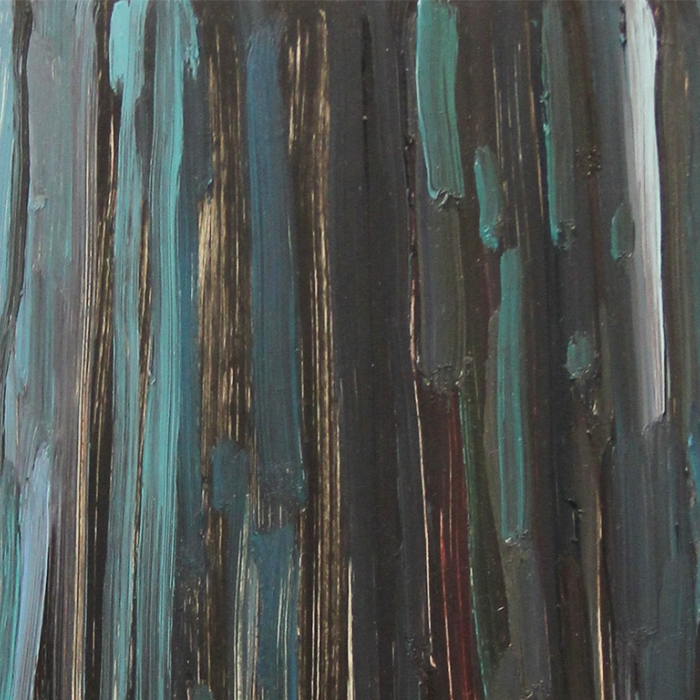 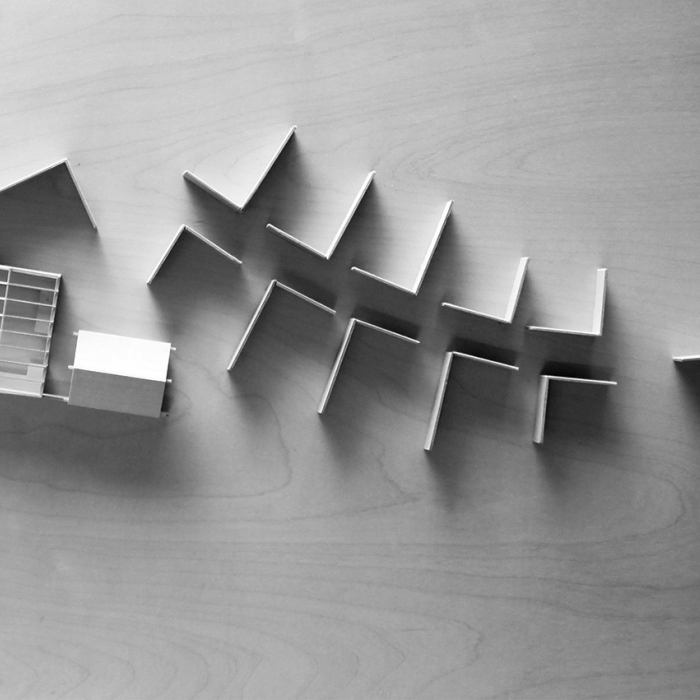 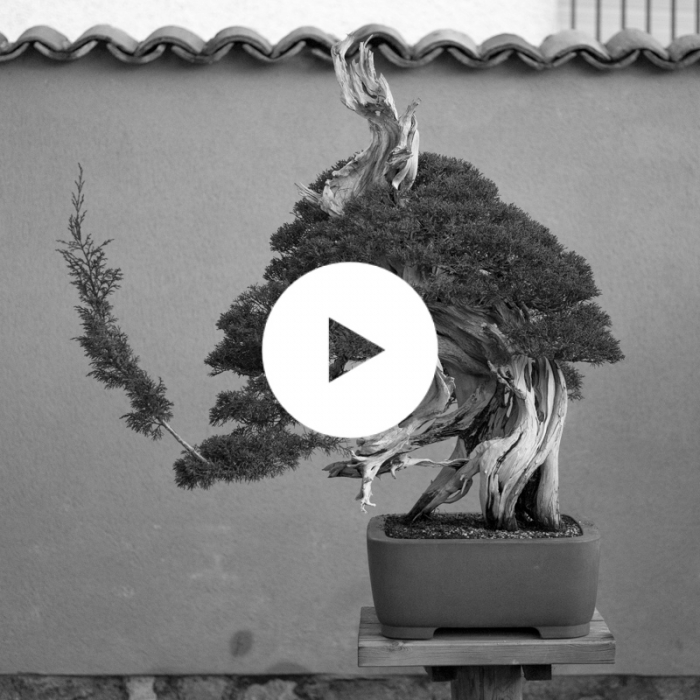