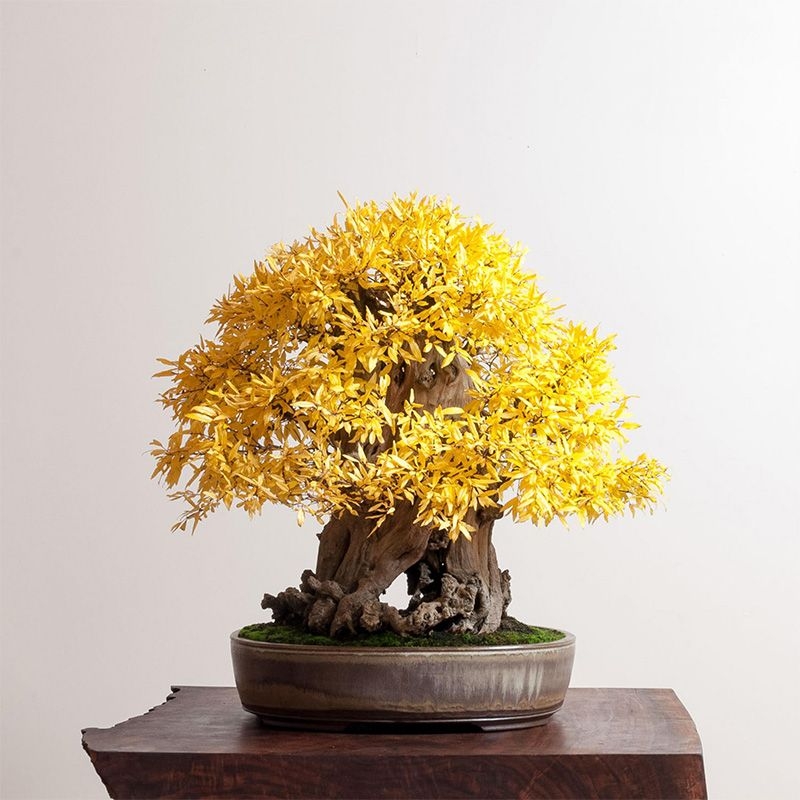 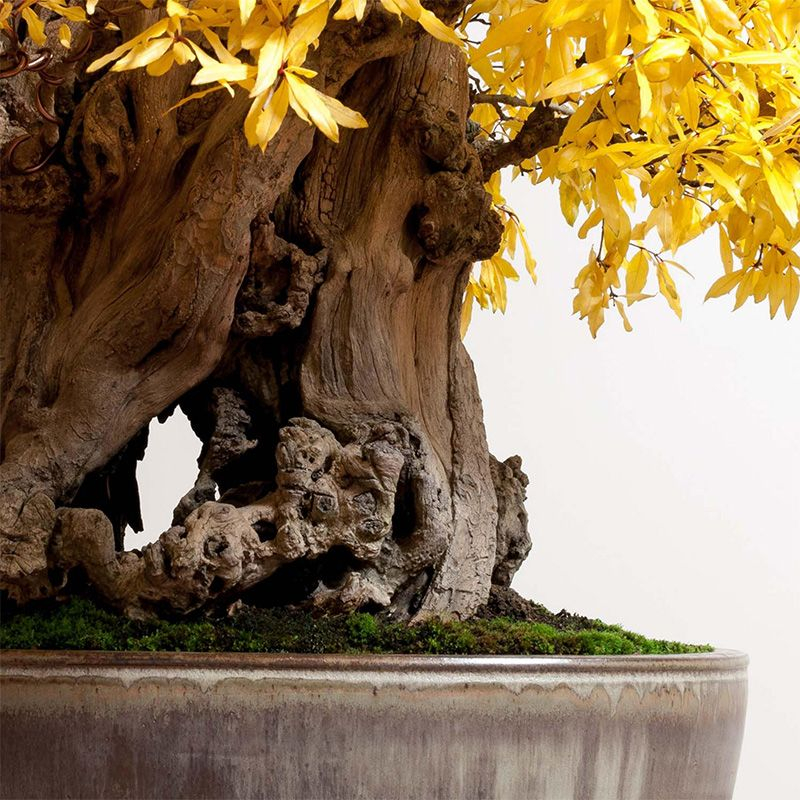 The Pomegranate bonsai—Punica granatum—is one of the great Mediterranean species of broadleaf deciduous trees. In warmer climates, the species is semi-evergreen, but not fully evergreen—as it sheds some leaves in the fall and winter no matter where it’s being cultivated.

The species is most commonly valued for its twisting nature and rotation in the trunk and its capacity to form strong, muscular veins. Pomegranate bonsai displays wonderful, unpredictable, and freeform branching with the same unique, unexpected movement in the trunk.

Pomegranate bonsai are known to only fruit in climates with warm, prolonged summer months and mild winter temperatures, such as Japan and the Mediterranean regions of the world. It will flower in most colder weather climates but generally does not have the capacity or the timeframe of heat to drive it into fruit production. 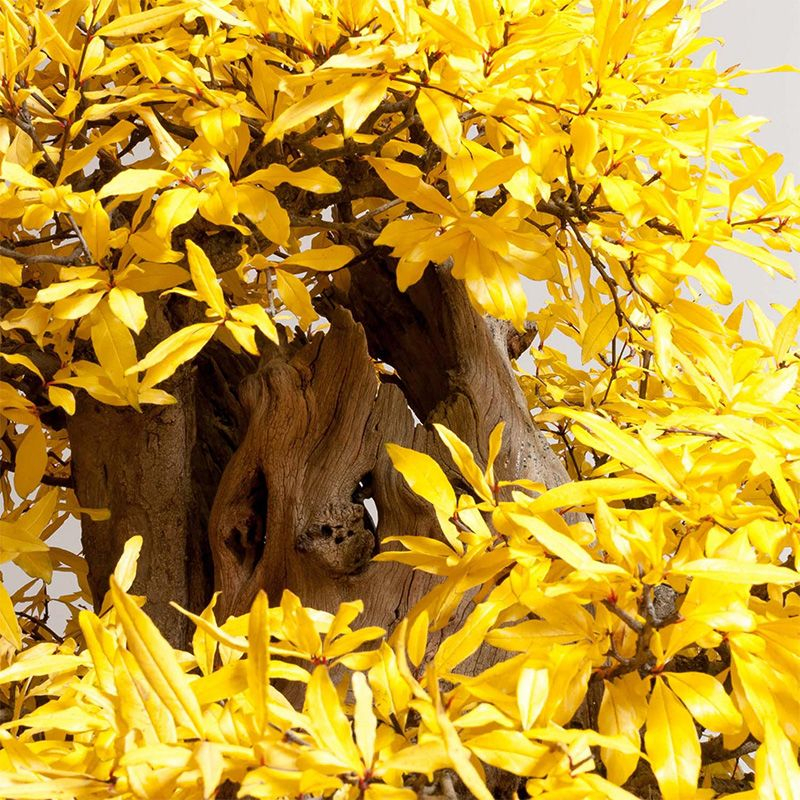 Pomegranate bonsai love water and will use a lot of it during growth and cultivation. As a high water mobility species, and as a broadleaf deciduous, it moves a lot of water. While pomegranate does not want to be kept sopping wet, it does lean on the water side of the balance between water and oxygen.

Pomegranate can tolerate temperatures well over 100°F and periodic freezing down to 25°F without much of an issue. It’s a diverse, strong, robust, and very tolerant species. Although strong, subjecting the tree to prolonged periods of freezing is where pomegranate will show some weakness. If your pomegranate bonsai tree will be exposed to 25°F for a week or more, then it will benefit from some protection.

Pomegranate bonsai can tolerate intense sun far greater than most broadleaf deciduous species while in a bonsai container. In a deeper or larger container, pomegranate can tolerate full sun, even throughout summer, needing shade cloth or protection only on the most extreme heat days.

However, in a small, shallow container, it may need a light degree of shade or protection from the most intense afternoon sun on the hottest days.

For refinement, pomegranate should be fertilized moderately from the beginning of growth in the spring until the onset of intense heat, or mid-July, and begin again in early fall when it drops its leaves.

During development, you should fertilize pomegranate more aggressively to take advantage of proliferation of tertiary branching and ramification.

When pruning pomegranate bonsai, it’s important to remember that the species grows aggressively, so it’s best pruned for refinement when the leaves drop in the fall.

Pomegranate trees can be pruned two to three times a year, due to their high level of ramification and water mobility.

Prune the tree back to a single node and it will create a bifurcation or ramification and expand finer twigs come spring. It can also be pruned during post-flush harden stages after late spring or early summer. Then it will produce one or two more flushes, depending on temperatures.

When it comes to styling and design for structural work, pomegranates are best pruned in spring prior to the flush of growth. They should never be pruned for structure during summer months, as the bark becomes susceptible to sunburn when opened up. Pomegranate bonsai interior bark is not acclimatized to that intense sun—creating a higher risk of the interior growth dying back as a result of too much sun.

Pomegranate bonsai is best wired in the fall as its leaves drop, or in spring prior to onset of growth. You should avoid wiring the tree when it is in leaf or when it is being pruned in late spring or early summer prunings as the tree will suffer from the impediment of water mobility due to the movement of branches in the wiring process.

It’s best to use paper-wrapped copper wire or aluminum wiring.

Pomegranate bonsai can be repotted at different times throughout the year, though the best time to repot pomegranate is in spring just as the buds swell.

When repotting a pomegranate, you can promote lateral root growth in several ways:

Flattening out the underside of the base

Reducing the roots back to the finer secondary or tertiary roots

Removing any downward growing roots to the base of the trunk

This will help to set up that fundamental structure in pomegranate bonsai. Repot your pomegranate in 100% akadama soil.

As a Mediterranean species, pomegranate bonsai can also be repotted during the hottest portion of summer. At this time, you’ll make minor root and soil reductions, using this opportunity to change containers for exhibition purposes.

Pomegranate bonsai is a prolific root producer that has a high capacity to be struck as a cutting. The key to propagating pomegranate is to maintain high humidity after the cutting is taken.

When taking semi-hardwood and hardwood cuttings that are larger in diameter, pomegranate bonsai can be almost flat cut and will root as a bountiful Mediterranean characteristic and species.

Pomegranate bonsai trees suffer heavily from peach leaf curl in the spring season and areas with heavy rain. Peach leaf curl can become a real problem that distorts foliage, making it less photosynthetically efficient and weakening the tree over time.

Successive years of heavy peach leaf curl infestation can cause serious branch dieback, reduction, and loss. To halt the beginning of peach leaf curl, you should either apply a proactive fungicide, a dormant spray of oil, or lime sulfur treatment before the onset of growth—or simply keep the tree out of heavy spring rains in wetter portions of the world.

Aphids may also be a constant pest along the soft, fleshy growth of the tree. You can remove aphids with water first, and if necessary, apply a chemical treatment in early identification. However, beneficial predatory insects, such as ladybugs or mites, are preferable and far more sustainable in the garden environment for controlling aphid populations.

How Do I Get My Pomegranate Bonsai to Flower?
Pomegranate bonsai flowers on vigorous, unpruned growth. When pruning to achieve a refined bonsai, you will be cutting off the flowering and fruiting components of the tree. Pomegranate bonsai trees will fruit and flower on unpruned growth, which means you should skip the first post-flush harden prune in the late spring and early summer, and focus on getting many flower buds producers over mid to late summer. This is when the buds will be both flowering and being pollinated to produce fruit during late summer and early fall. The more full sun you give pomegranate, the more vigorous it will become. Allowing healthy, aggressive growth where the branches elongate is when you will most likely see flowers and fruit.
Are Pomegranate Bonsai Cold Tolerant?
Pomegranate is cold tolerant to a degree. Avoiding prolonged cold and freezing temperatures of a week or more will ensure your pomegranate doesn’t suffer.
How Do I Get My Pomegranate Bonsai to Twist?
The twisting nature of pomegranate is genetically built into the species. However, there are cultivated varieties that twist more than others, the most iconic being the Nejikan pomegranate from Japan. Healthy cultivation and appropriate selection of propagation material from trees that share this characteristic are the best way to achieve more natural, genetic twisting. There is no artificial methodology to get a pomegranate to twist.
What Does It Mean for a Pomegranate Bonsai to Be a Mediterranean Species?
The unique Mediterranean climate occurs in only five locations around the world, including: the central coast of Chile, central coast of California, southern tip of South Africa, Australia, and the Mediterranean basin. They occupy 5% of the landmass in the world but manage to maintain the largest population of plant species in the world as a result of the unique climate.

Bonsai Mirai is dedicated to assisting you in caring for your pomegranate bonsai tree and other bonsai trees. Our professionals are happy to help you with everything, from the initial cutting to the refinement and development of your pomegranate bonsai. Our styling and maintenance services will help ensure your tree matures into a robust, high-level bonsai. Contact us for an estimate.
Pomegranate no. 1 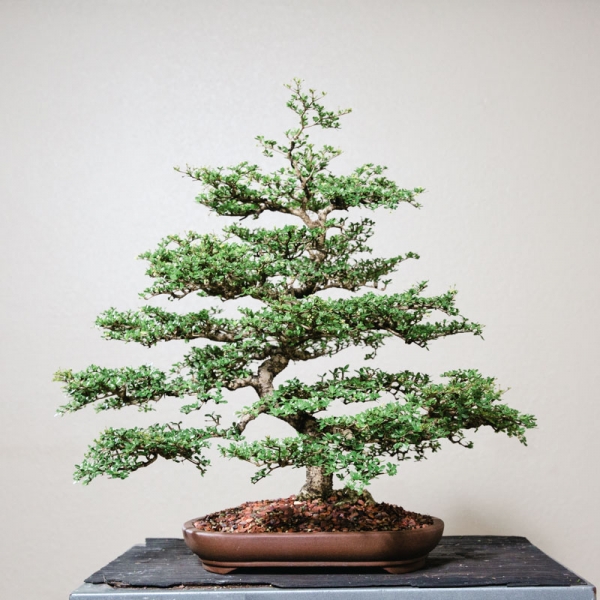 Dwarf black olive bonsai —Bucida Spinosa— is a tropical broadleaf evergreen. It is native to the tropical regions of Cuba, the Bahamas, and some parts of Florida. 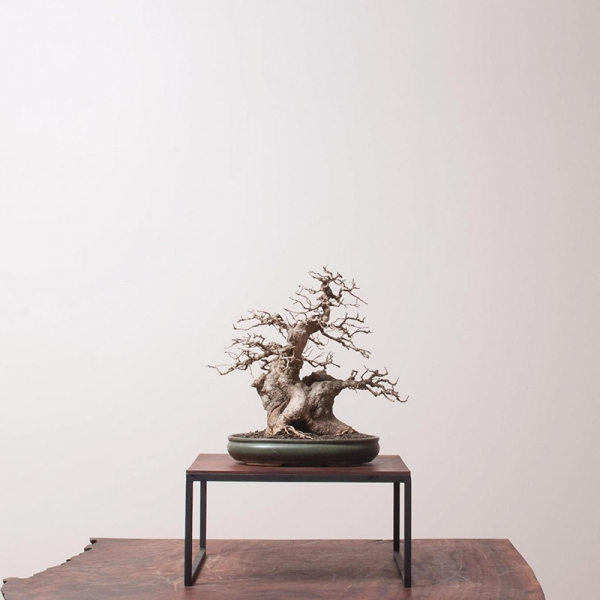 Korean hornbeam is one of the most beloved of all species used for bonsai.

It is famous for: 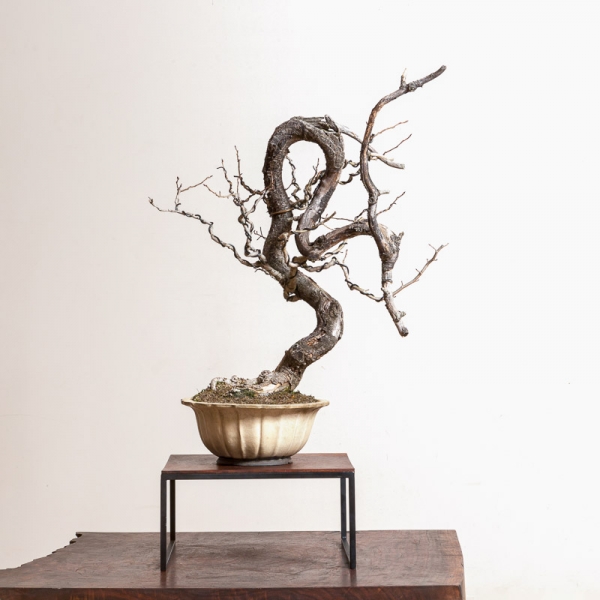 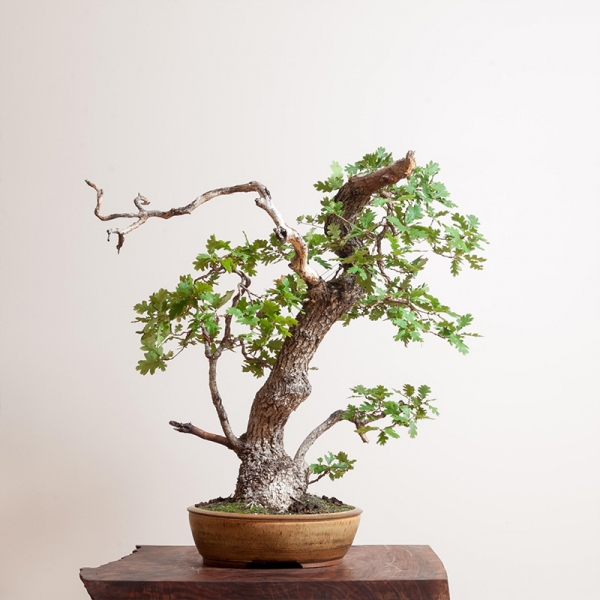 White oak bonsai belong to the Quercus family, which is one of the most diverse species of plant in the world.