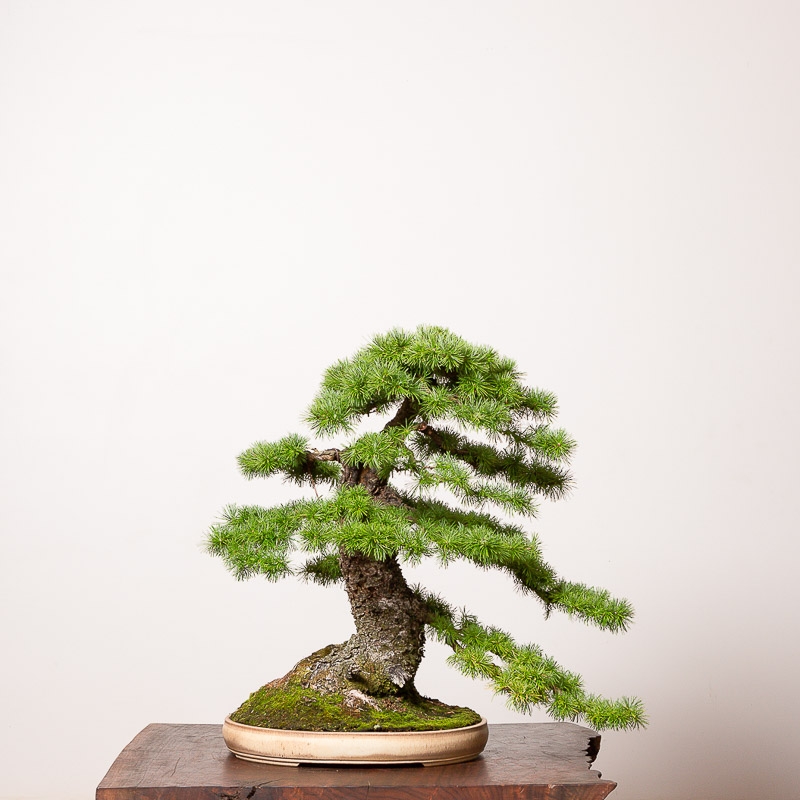 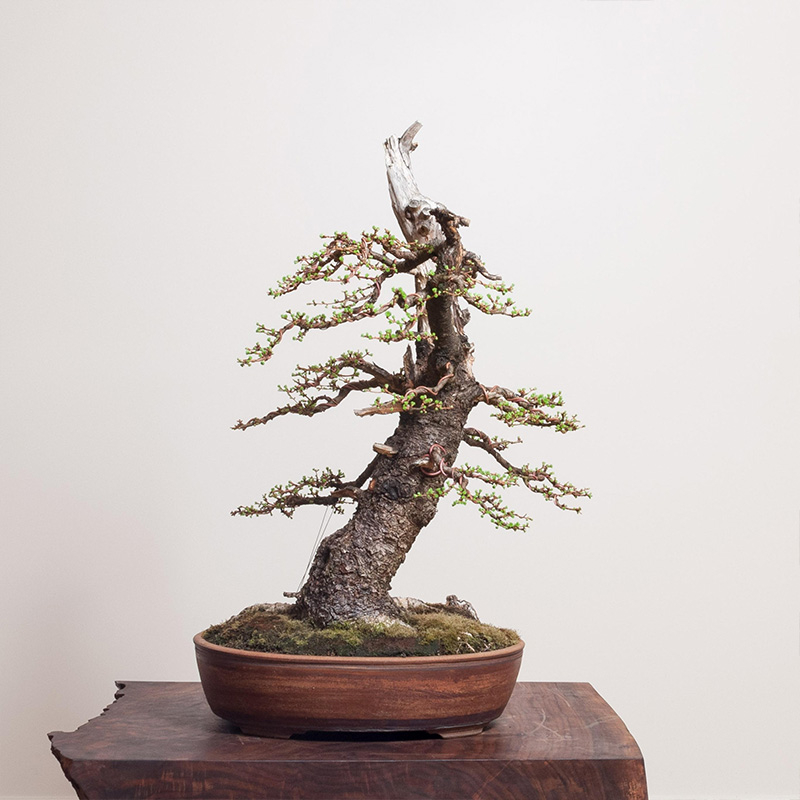 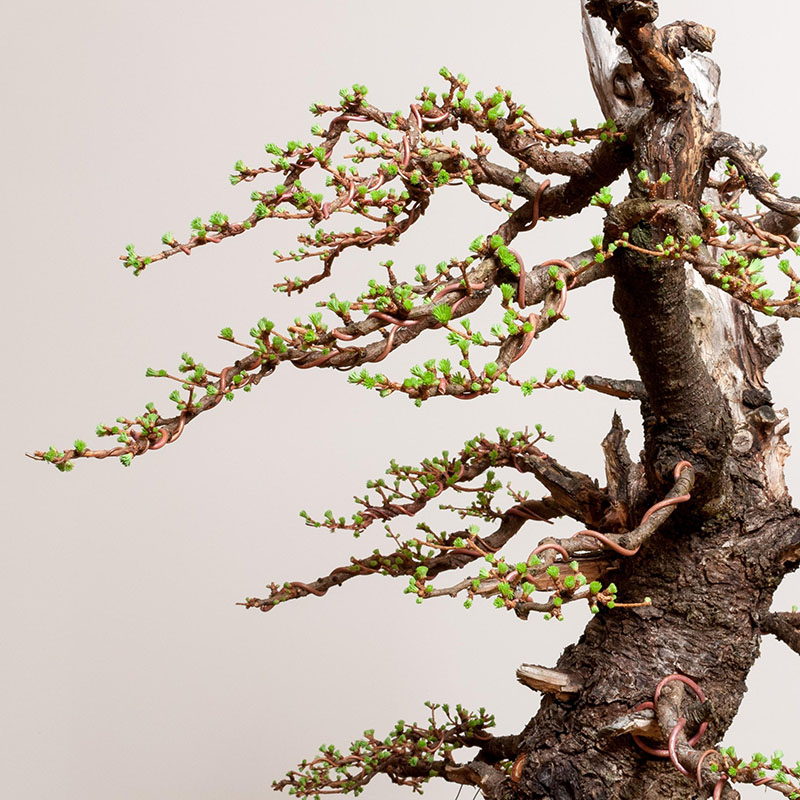 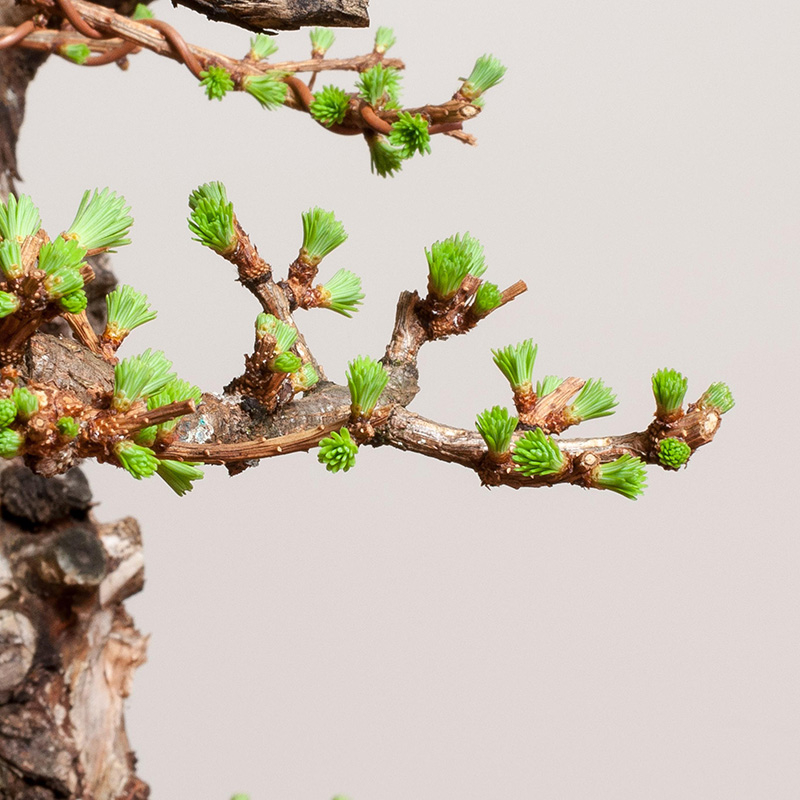 The Japanese larch bonsai—Larix kaempferi—though rare to see in a Japanese bonsai exhibition, is, by far, one of the most amazing of the Larix species. With short, tight, and compact needles and magnificent branching, the Japanese larch produces the finest ramification if handled correctly.

The Japanese larch is durable and tolerant of both styling and repotting, displaying:

● Splendid color when pushing out in the spring

● Gets wire bites in relatively fast; and

● Grows quickly in the spring

There is so much to love about the Japanese larch as a bonsai subject. Japanese larch bonsai is a species with several unique qualities and peculiarities. To cultivate this type of bonsai, it’s crucial to understand its physiology. 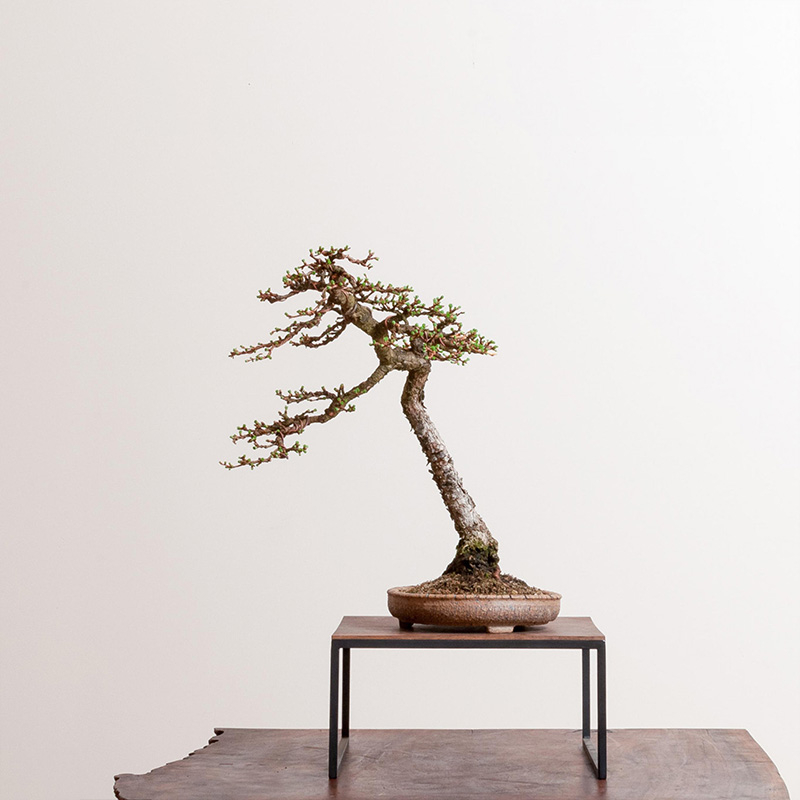 Japanese larch bonsai is considered a high water mobility tree of the deciduous conifer species. Because of that, Japanese larch needs an abundance of water.

You want to water your Japanese larch bonsai tree before it dries out, but not while it’s saturated. The perfect time to water a Japanese larch is when the soil is still somewhat damp.

Because Japanese larch is a high alpine elongating species with high water mobility, it will typically exist and be cultivated in regions with cool nights. They can tolerate warm temperatures but will not consistently tolerate temperatures above 95-100°F.

It’s important to note that if you are cultivating Japanese larch in high-temperature regions, it  cannot be pruned very frequently. When this type of bonsai is pruned in regions above 90°F, the bonsai should be under 30% shade cloth.

Because of the alpine region where Japanese larch exists, they will have significant periods of dormancy. They love full sun in the spring and fall and flourish in northern areas that experience cooler nights.

Even in these areas, they can tolerate full sun if they are not pruned. Once you start pruning, the Japanese larch needs to be shaded in the warmest temperatures and brightest sun of the summer.

Remember that the strength of the Japanese larch is stored in the vascular system, and the massive amount of sugars and starches create a tremendous amount of vigor.

Aggressive fertilization can help to produce up to four flushes in a year and maximize ramification while building a larch.

However, it’s important to know that once you start to refine a larch, you should pull back to moderate or light fertilization to avoid large internodes. Doing this will give you finer growth with less thick branching and ramification. You’ll experience finer general production of foliage over the year.

Japanese larch are pruned several times over the spring season, depending on their vigor and push of growth. Pruning for refinement is a unique process, and the only time that is appropriate to remove structural branches is in the spring before the flush of growth.

The Japanese larch is usually pruned three times in the spring according to the following schedule and process:

● First pruning at the end of May:

○ If the  internode to the first bud is extremely long (more than ¼ inch), prune the new fleshy growth back to the base of the growth.

○ Try to save two buds, though that may not be possible in the first flush.

○ This first pruning will produce a world of growth, which is better than long  internodes.

● Second pruning at the end of June:

○ At the second flush, the moderate energy and moderate growth will be pushing on Japanese larch.

○ Allow four to six buds to delineate themselves.

○ You should see far more moderate growth and have tight interior  internodes that can be saved as ramification.

● Third pruning at the end of July:

○ Prune a Japanese larch a third time if the third push is very vigorous.

○ Almost all of the growth will result in bifurcation pruning—two tight interior buds.

Do not prune Japanese larch after the end of July, even if it produces a fourth flush. It’s extremely important to remember that even though the Japanese larch is an elongating species, because of its deciduous nature, Japanese larch should not be pruned in the fall.

Some nuances should be considered when repotting the Japanese larch. Like the hemlock, the Japanese larch has a bad reputation for being root sensitive. As mentioned before, this root sensitivity is due to the high water mobility of this elongating species and the fact that the strength exists in the vascular system.

And it’s all about timing:

● You can heavily reduce the roots if you have not pruned the branches.

● You can heavily reduce the branching if you have not pruned the roots.

Repotting the Japanese larch is possible, especially if you are repotting a strong tree. Right as the first bud starts to show green, you have a seven-day window to maximize any sort of severity in the repotting process.

It’s not recommended to repot before that timeframe.

…it’s very challenging to get a larch to take from cutting.

Japanese larch are unique in that they aren’t generally susceptible to pests or diseases.

That’s not to say that they aren’t sensitive to outside forces. Japanese larch sensitivities as a bonsai subject come mainly from their:

In addition to pruning, many bonsai trees can be styled by wiring. However, the Japanese larch should not be wired when they drop their leaves.

The only time to wire the Japanese larch is before they push in the spring.

Can I Wire or Prune My Japanese Larch in the Fall?
No, you should not wire or prune Japanese larch in the fall. You should also not prune the larch when they drop their leaves. Even though they are deciduous, they are also coniferous. The conifer component means that they should not be handled once they drop their leaves because it will completely destroy their dormancy. Pruning or wiring in the fall will lead to significant branch dieback and weakening over the winter season.
Can Japanese Larch Be Cultivated in Warm or Hot Weather Climates?
Yes. Japanese larch is quite adaptable as long as you understand the importance of keeping the water cool as it moves through the tree. This can be accomplished by shading the pot.
How Fast Does a Japanese Larch Grow?
With good care—including light restrictions, watering, and weed management—the Japanese larch grows vigorously, up to one meter a year over the first five to six years.

Founded in 2010 by bonsai professional Ryan Neil, Bonsai Mirai is a garden and studio in Portland, Oregon, whose mission is to create trees that connect people to: Nature Culture; and The spirit of the individual. Through science-based bonsai education, we are committed to passing on our knowledge while providing accessibility to the bonsai art form through our local and global communities. To peruse the variety of bonsai species or to purchase your own bonsai and a variety of tools and supplies, shop our online store.
Japanese larch no. 1 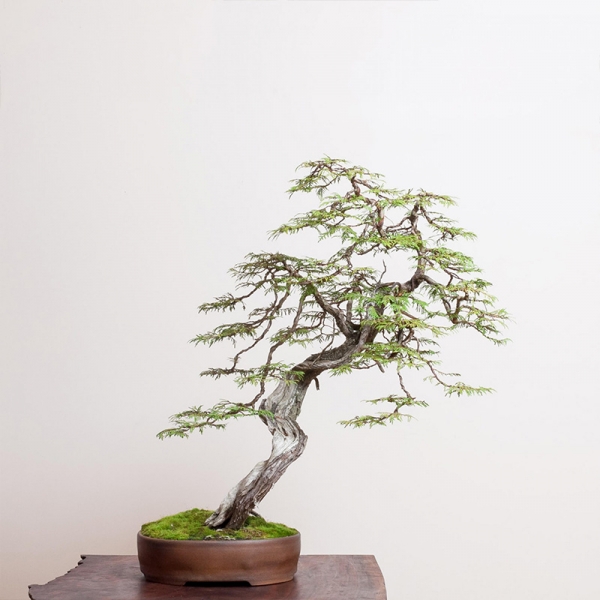 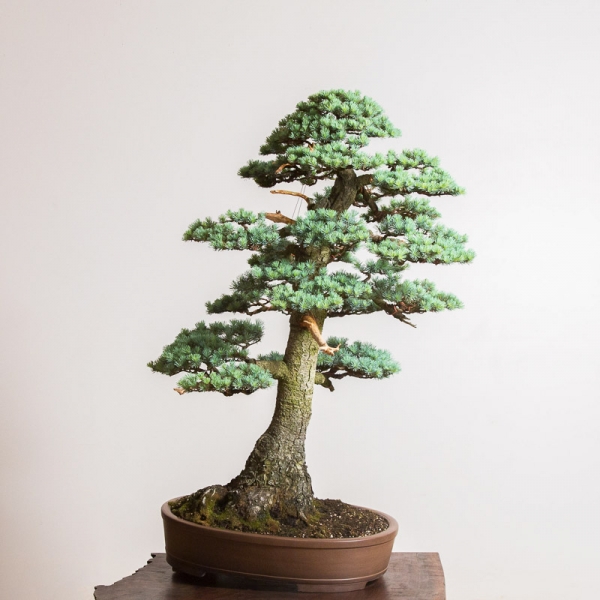 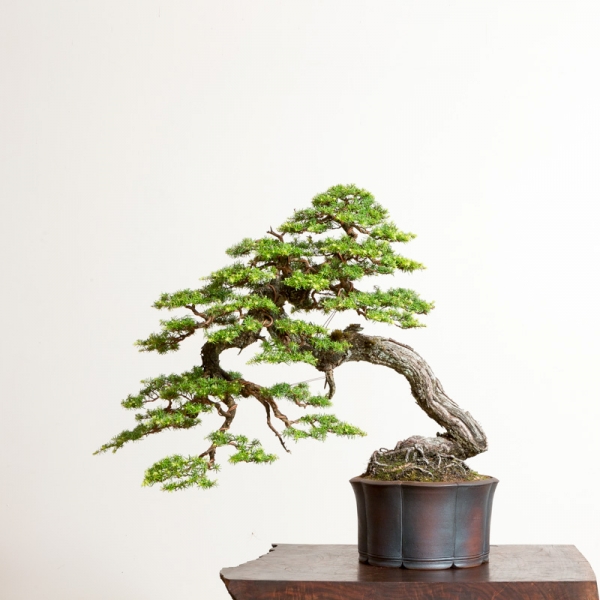 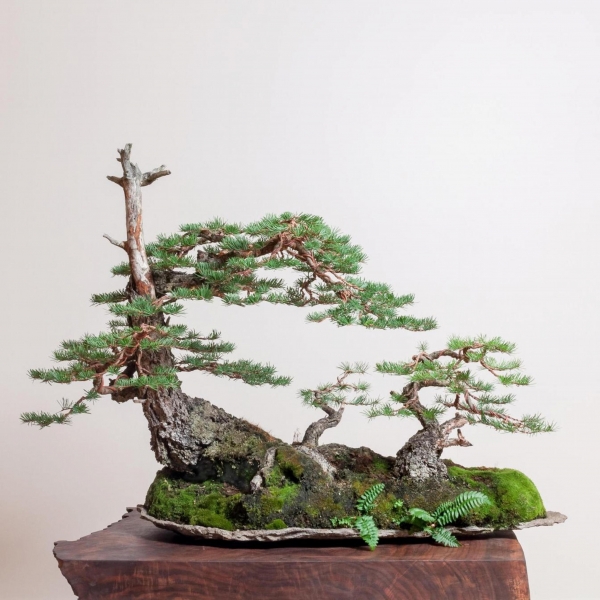