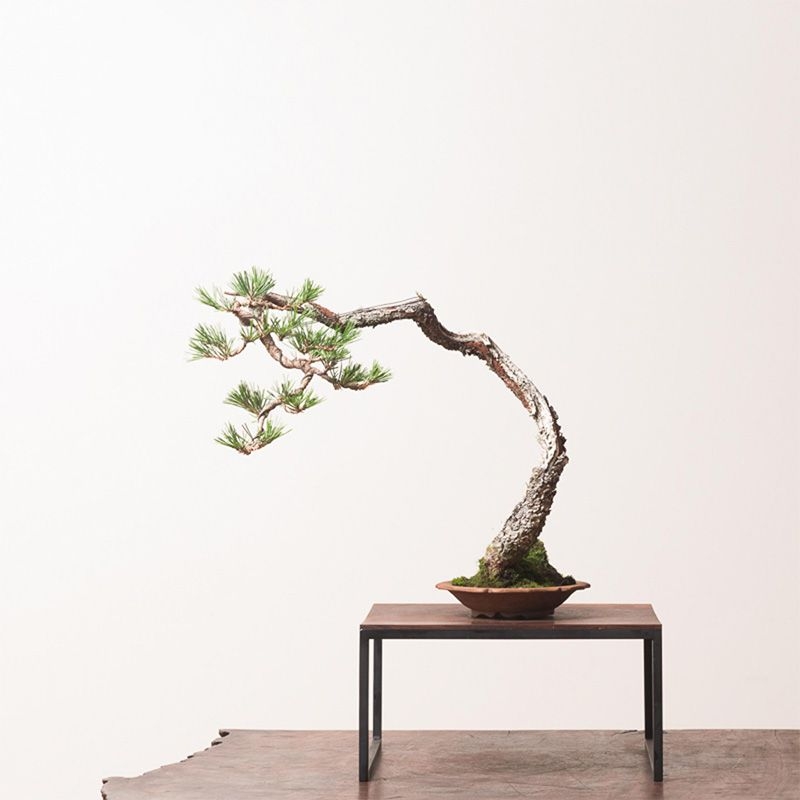 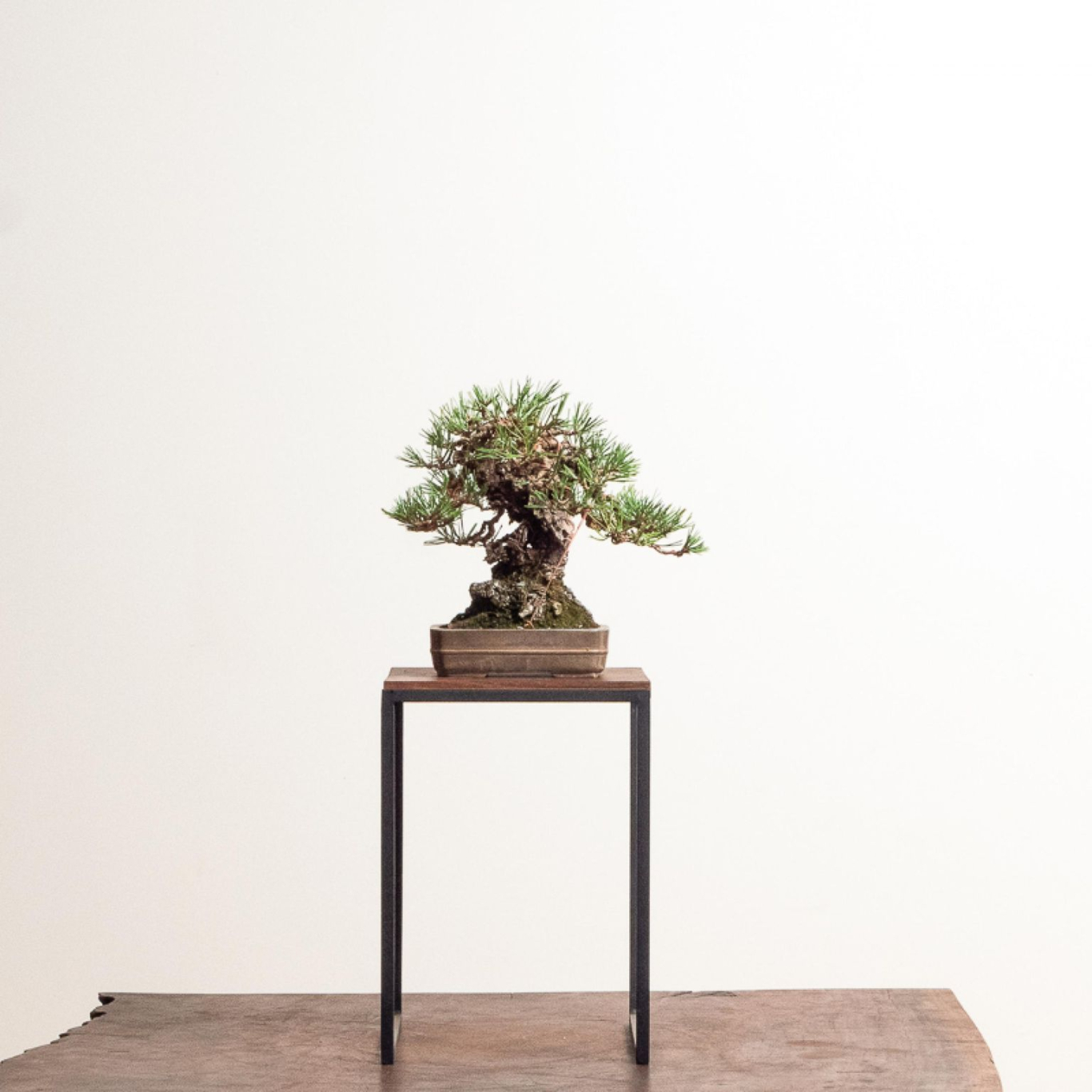 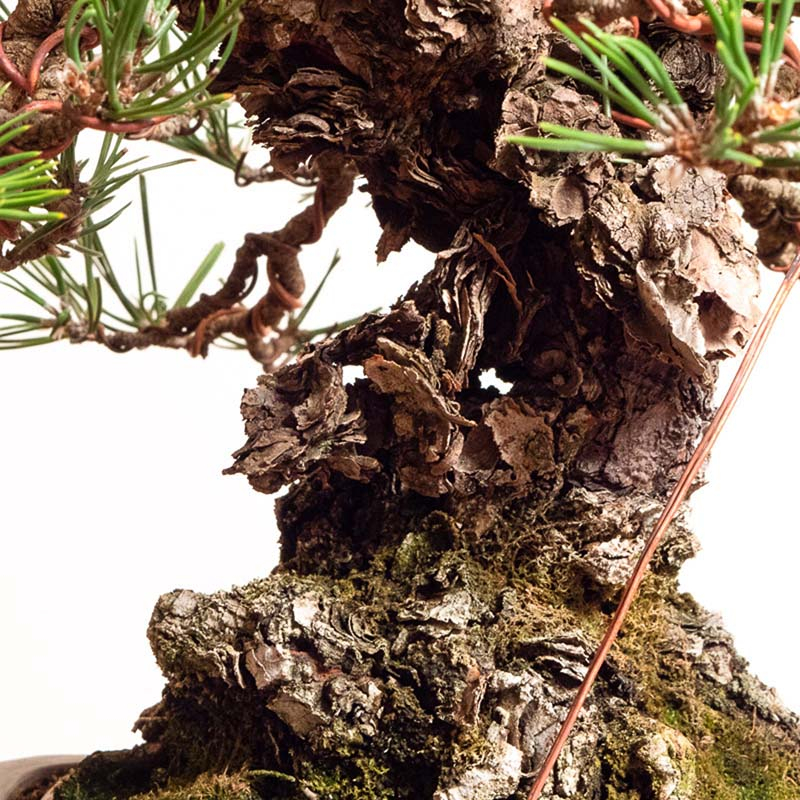 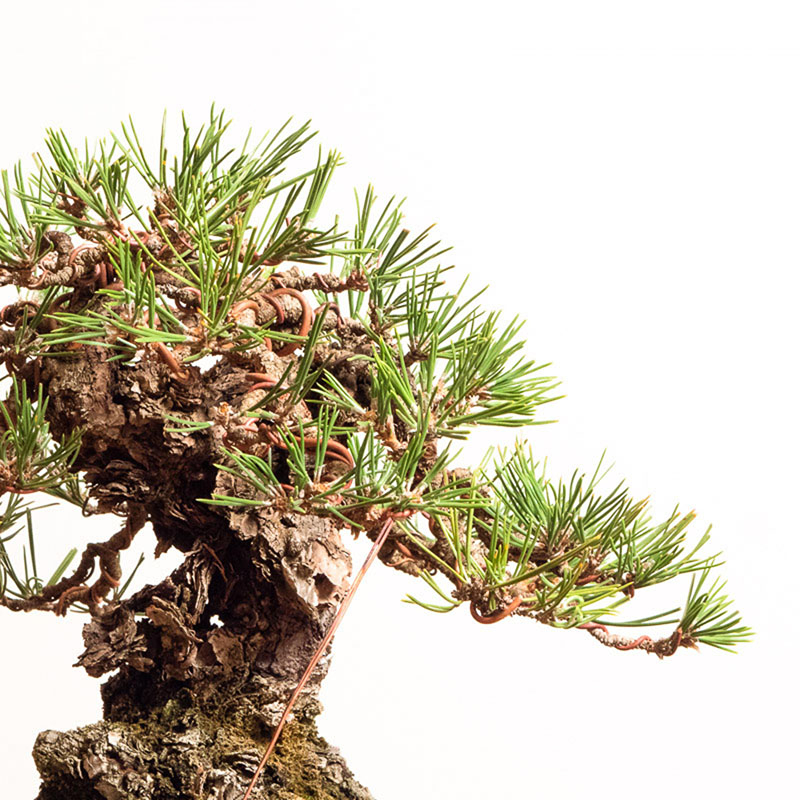 Japanese black pine bonsai—Pinus thunbergii—is known as the king of bonsai and the most iconic conifer in bonsai practice. Japanese black pine’s aesthetic speaks to its longevity and durability. This conifer is a very powerful, aggressive, masculine approach to bonsai because of specific features, including a:

Capable of producing two flushes of growth in a single season, Japanese black pine is one of the most vigorous bonsai trees.

It is viewed as a representation of longevity, so you will often see this species at funerals and outside of cemeteries or shrines. In Japanese culture, it is a symbol of the new year and the changing of seasons. 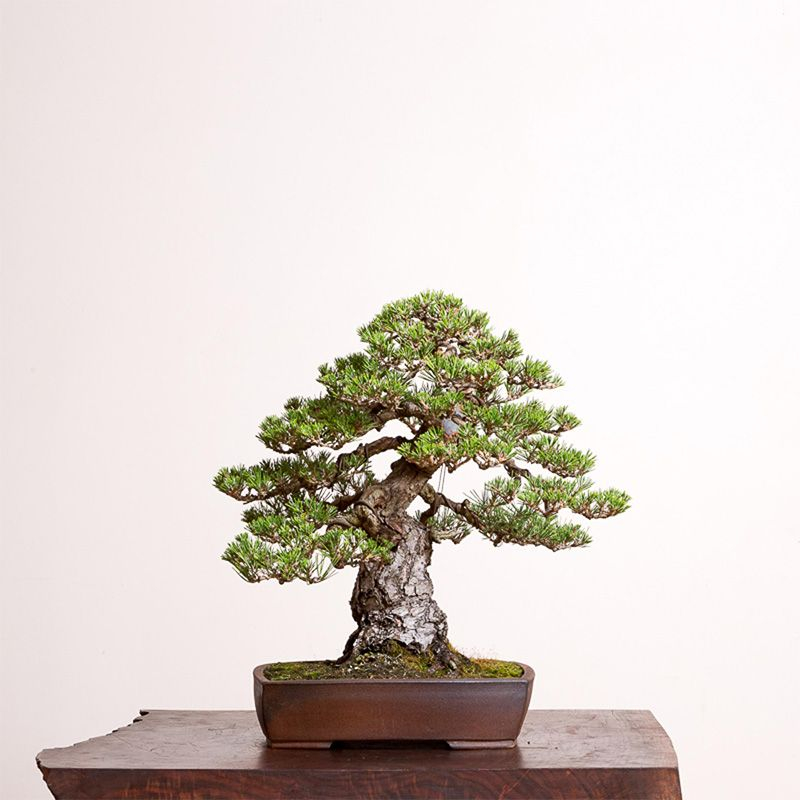 Japanese black pine bonsai do not like to be kept wet and their soil should be thoroughly dried out between waterings. The trick is to not let their roots stay dry for a long period to avoid reducing the tree’s growth rate.

Although they don’t like being kept wet, they are a species that utilizes a large amount of water. So when it comes time to water the tree, ensure the roots are thoroughly saturated.

Japanese black pine can easily tolerate temperatures in excess of 100 degrees—especially with higher relative humidity levels. The deeper, less confined, the container, the higher the heat tolerance. We recommend that this species be planted in a deeper container, giving it a higher heat tolerance of 110°F.

On the flipside, Japanese black pine cannot tolerate cold weather. When temperatures drop below 25°F for a short time, the tree’s container should be wrapped and protected from intermittent cold spells.

If temperatures drop below 25°F for a prolonged time, or you are cultivating the species in a colder environment, it is vital that the tree be brought into a greenhouse.

Avoid shading Japanese black pine bonsai. This species responds best to full sun and a prolonged amount of sun exposure throughout the day.

Fertilization is a key component in maintaining the livelihood of your Japanese black pine. Fertilizing techniques for this bonsai vary depending on each phase it is in and if you are seeking refinement of your bonsai.

During developmental phases, Japanese black pine can take heavy fertilization when its candles begin to elongate in spring until going into total dormancy in late summer to early fall.

We recommend only withholding fertilizer over the hottest months—mid-July through August.

When decandling and seeking refinement of a Japanese black pine, timing is everything. Apply your last round of fertilization one month before decandling—starting in April and ending in May.

If you are aspiring to…

- Get shorter needles; and

- Keep this species in a refinable state

… and you live in a warmer climate, you may even decide to fertilize as early as the first of March.

When pruning a Japanese black pine bonsai, it is best to start pruning when temperatures are slightly cooler because of the significant amount of sap this species produces when being pruned.

During the cooler seasons, sap is not flowing, is denser, and in less of a floatable liquid state, allowing the tree to patch any wounds before too much sap is lost.

If you’re worried that your timing isn’t quite right, or that you may ruin the aesthetic of your Japanese black pine during pruning, you can use dry sphagnum moss over a heavy sap-emitting wound to cauterize it for two or three weeks.

Properly needle plucking your bonsai will have a tremendous impact on reducing proportions of your tree. This can be done in late summer to early fall.

When needle plucking a Japanese black pine bonsai, you’ll want an even distribution of needles on every shoot. Needle plucking distributes the energy needed to incite a second flush of growth and results in an even flush of needles.

When pruning for refinement, you must shoot-select to reduce shoots in early to mid-November.

Wiring and styling of Japanese black pine can occur in multiple seasons. Structural wiring can be done in the early spring before it starts to grow or in the fall during the shoot selection process.

Fall is a great time to wire and refine the branching of this specific species.

Repotting Japanese black pine bonsai trees should be performed when their root system has filled the pot, typically in spring before the buds begin to swell. This process supplies the tree with fresh soil and promotes a more compact root system.

Ensuring that your black pine has enough space for its roots to utilize the added nourishment and moisture is ideal.

Propagation of Japanese black pine bonsai is entirely seedling based. Sowing seeds in light sand in the early spring is ideal.

The most common pests you may find in your Japanese black pine include:

Japanese Black Pine bonsai are most susceptible to pine wilt disease and tip blight disease as well as ​​Lophodermella, a fungal disease.

Can You Grow a Japanese Black Pine Bonsai Tree Indoors?
Japanese black pine bonsai thrive outside. If you attempt to grow a Japanese black pine indoors, we only recommend doing so in a greenhouse or similar environment.
How Much Root Can I Cut Off of My Japanese Black Pine Bonsai at One Time?
We suggest not reducing any more than 50-60% of the roots. Remember, we never bare root a conifer—always leave some portion of the root system intact. 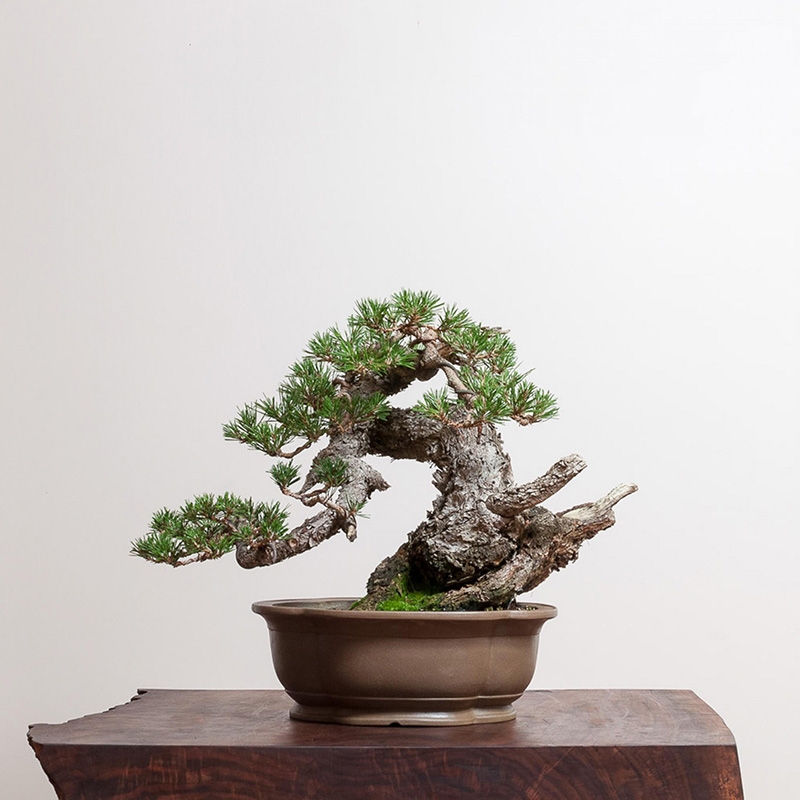 At Bonsai Mirai, we are thrilled to help you grow and maintain your Japanese black pine bonsai and other bonsai trees. As bonsai experts, we pride ourselves on educating bonsai creators and curating bonsai artistry. Contact us today for more care tips or to start shopping for your favorite bonsai.
Japanese black pine no. 2 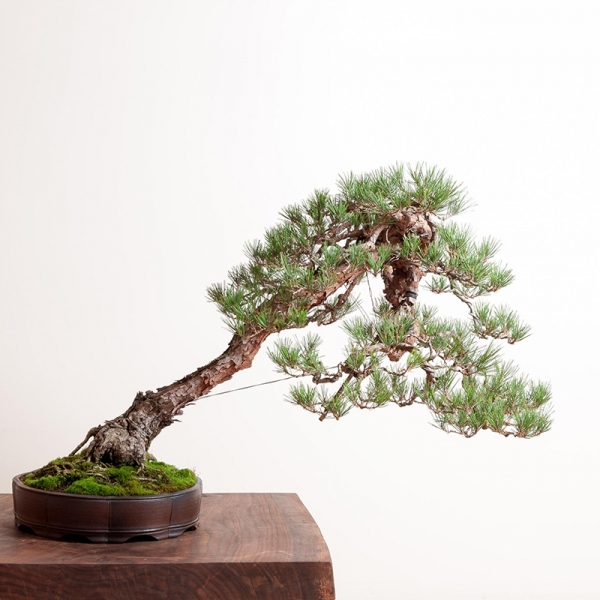 Japanese red pine—Pinus densiflora—is one of the pillar species of bonsai in the traditional practice in Japan. 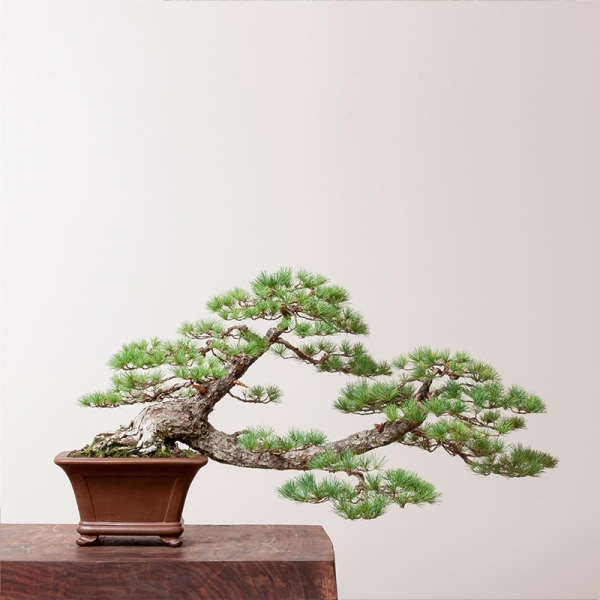 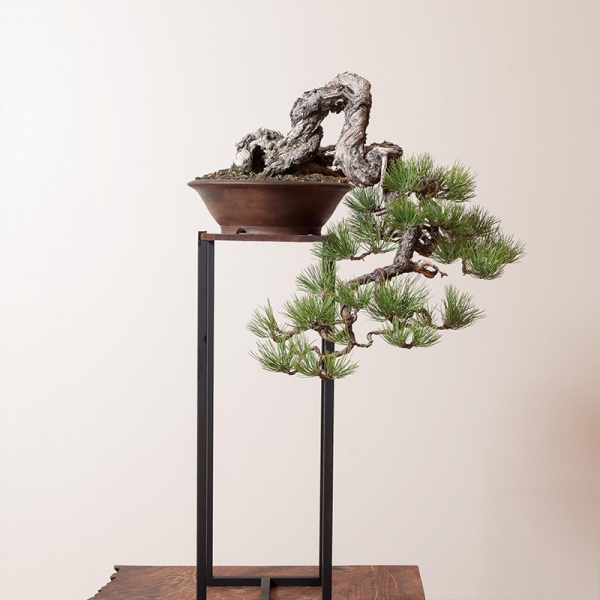 If we had to choose a pine species that we considered the “best” of the North American pines, Ponderosa pine would be a top contender.  From its aesthetic to its coarse needles, the species is  str