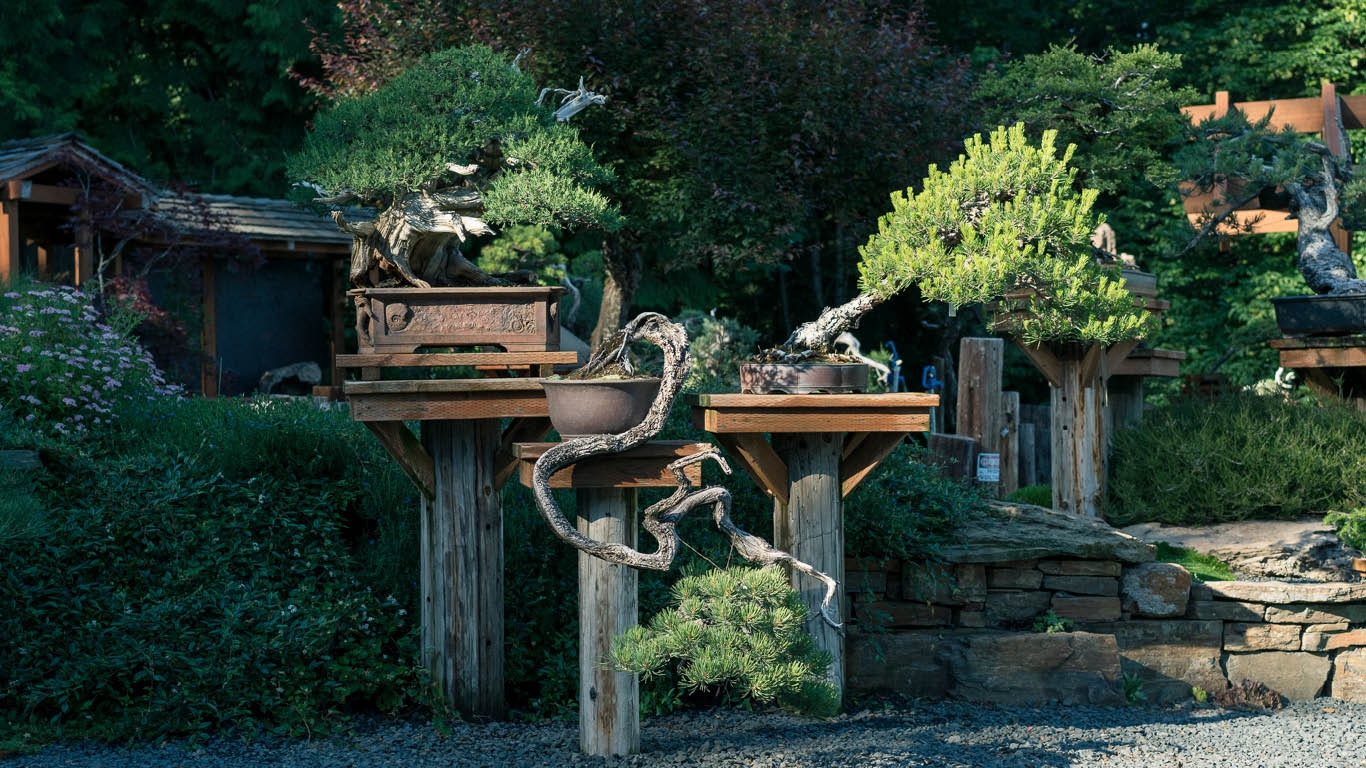 The story behind the garden

The inception of Mirai began well before I ever stepped foot on this property. Though I toyed with the concept for years, the physical place has been the primordial pool of creativity from which the community, brand and ethos of the company evolved.

As an apprentice in Japan, washing rags was one of the very first tasks with which I was entrusted. It's grunt work, humbling— a flow of cleansing contemplation where I could reflect on my mistakes, or the source of my uncanny perseverance. Above the sink ran a line of electrical conduit, manufactured by a company named ‘mirai.’

Everyday I looked at this word, mirai – in Japanese meaning "the unobtainable, ever-evolving future." The word became engrained, a subliminal cue coursing through the veins of my apprenticeship, goading and encouraging me to push that boulder up the hill day in and day out in an effort to actualize a semblance of this budding vision. A vision of ‘Mirai.’

On one of my trips to Oregon, as I was gearing up to return to the States from Japan, Randy Knight mentioned he’d found a property that I might be interested in. It was just a half-mile up the road from his operation. So we walked up to this beautiful, secluded hillside facing the vast Columbia River valley, with snow-capped St. Helens and Hood steadfast in the distance. 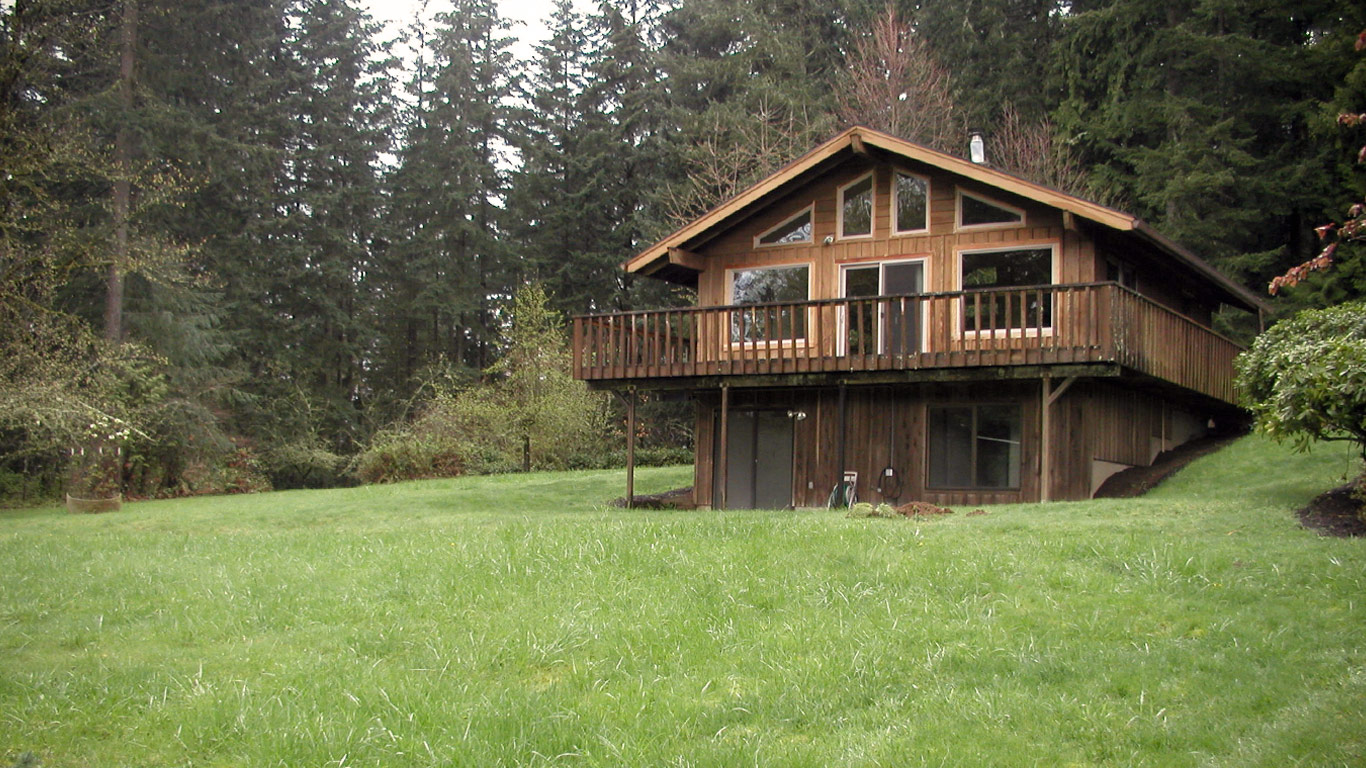 "We walked up to this beautiful, secluded hillside...I knew this was where Mirai needed to be."

A quaint, yet dilapidated cabin stood on at the top of the hill. To the right stood a red, makeshift barn. Proud stands of doug-fir and cedar hugged the 5-acre property line. A few rhododendron dotted the landscape, but for the most part it was a bare, grassy knoll.

I immediately knew there was something special about this place, yet logic led me to explore other options. After viewing 76 other properties, something kept bringing me back. I made up my mind.

Everyone thought I was crazy. This was the right after the recession, so I could have bought a 3000 sq. foot, sparkling home for half the price of this property. I was opting for the remote hillside with a house that probably should have been torn down.

But the house was itself a part of the landscape, built from timber cut and milled on-site. The hill was perfectly oriented with a southeastern exposure. The surrounding forest provided a barrier to the strong Pacific winds, and the water from the semi-operational well was some of the highest quality in the country. I knew this was where Mirai needed to be. 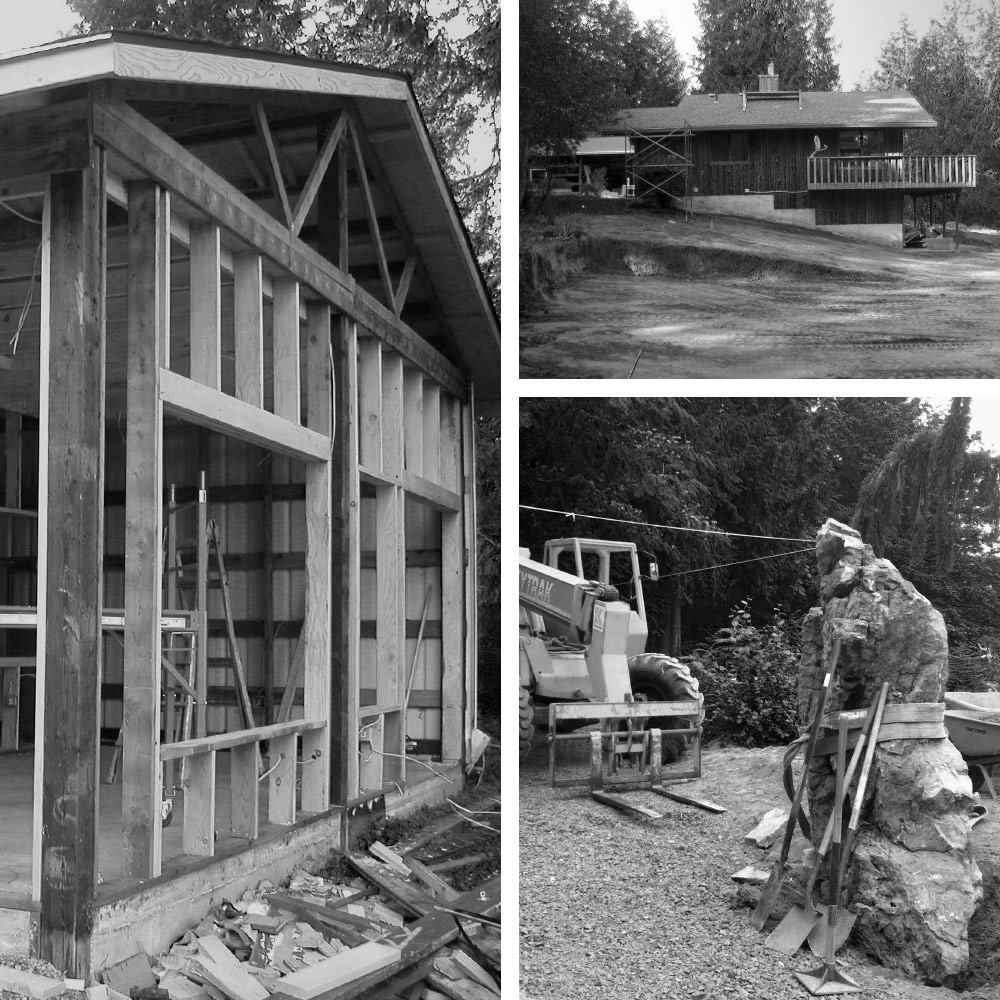 The first time I walked out on the deck, I fell through it and almost broke my ankle. The night I closed on the property, rain poured through the roof and into the basement as I lay sleepless, anxious. These were the first of many incidents causing me to question the decision, but I met that roughness with grit, worked with it, built upon it.

"The night I closed on the property, rain poured through the roof and into the basement as I lay sleepless, anxious."

Call it stubbornness, or foolishness, but once I made my mind up about this property, all of the mishaps and surprises almost made me love it more. My apprenticeship had conditioned me to meet these grueling challenges with an unwavering commitment to keep moving, working, and improving. And that energy has been present with this place from day one. 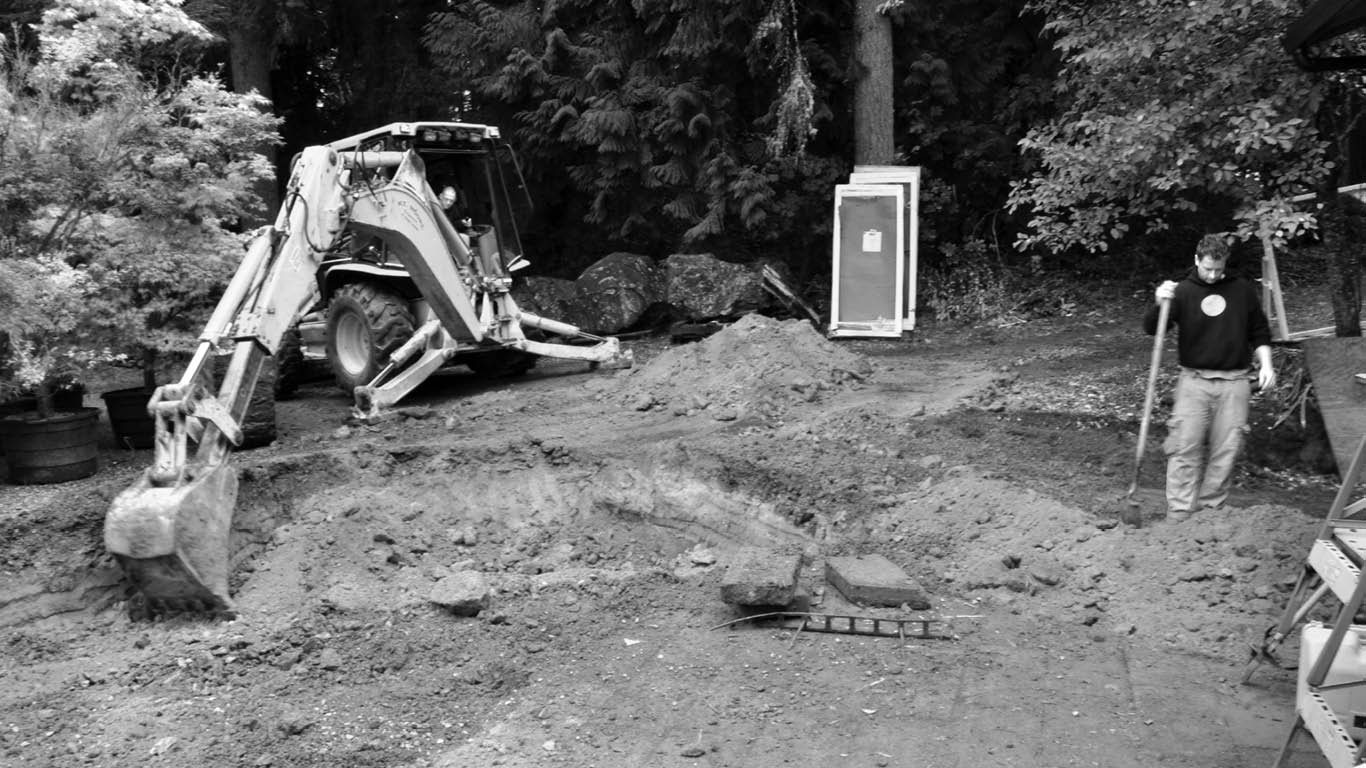 The inaugural projects began on April 16, 2010 – I began by gutting the main house, framing the walls of the old workshop (which is now the guest house), and excavating the terraces for the very first pads where the greenhouse and main garden sit today.

Even in those first few weeks, the property really opened up. We stripped the hillside of all vegetation, laid gravel, and began leveling the ground—it looked horrible. I was overwhelmed at the amount of work that lay before me, but I had help, and the individual days of effort began to stack up with some glorious results. 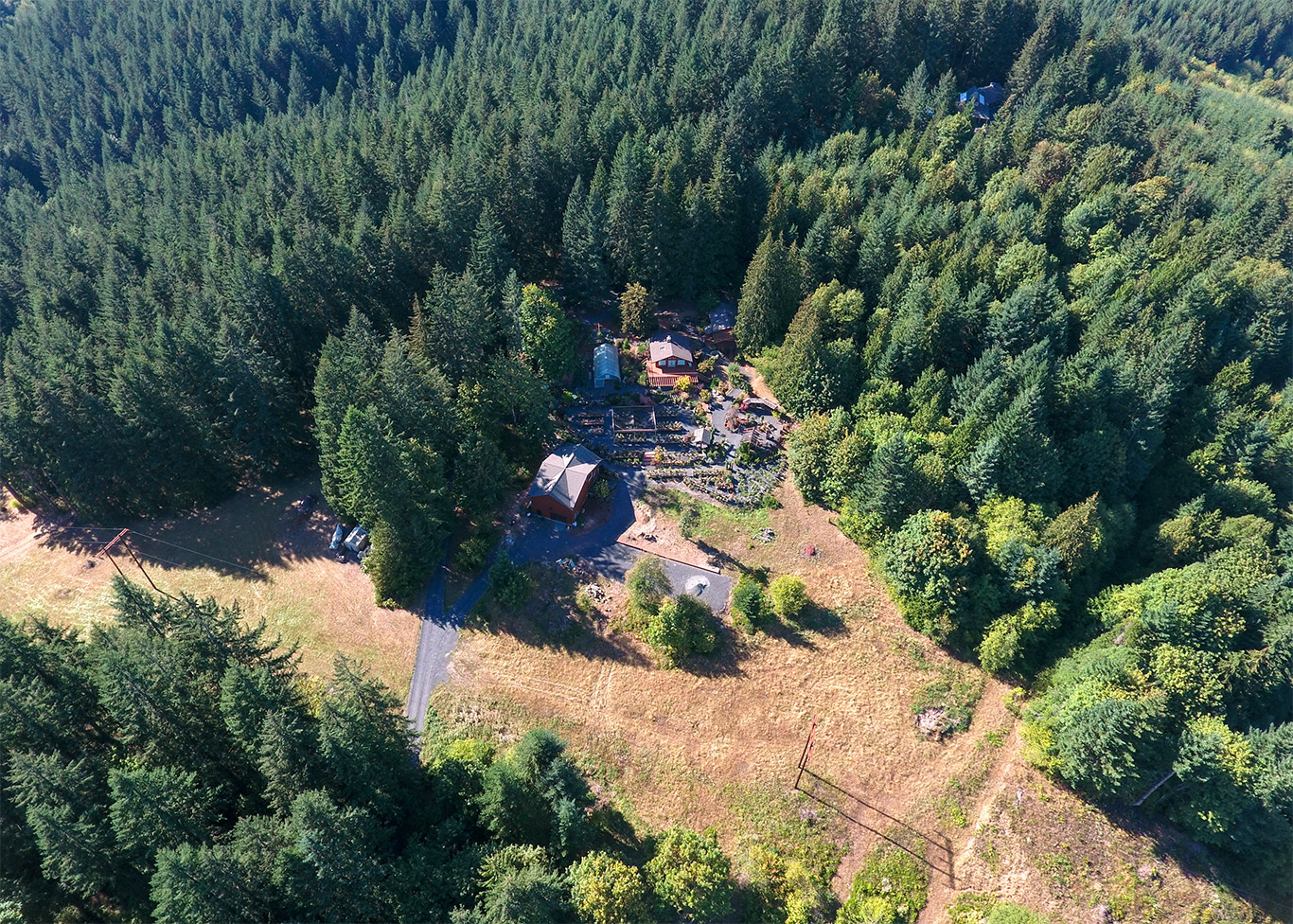 "The original house has always been the foundation for everything about Mirai."

With bonsai design, there are some guardrails that you need to set for yourself, a pattern to refer to while you are in the minutia of creating so that the overall result is cohesive. I approached the layout, landscape, and overall environment at Mirai in the same manner.

The original house has always been the foundation for everything about Mirai. It is the nexus from which each structure and space radiates. The architectural lines formed by that house are echoed in the design of every other structure. 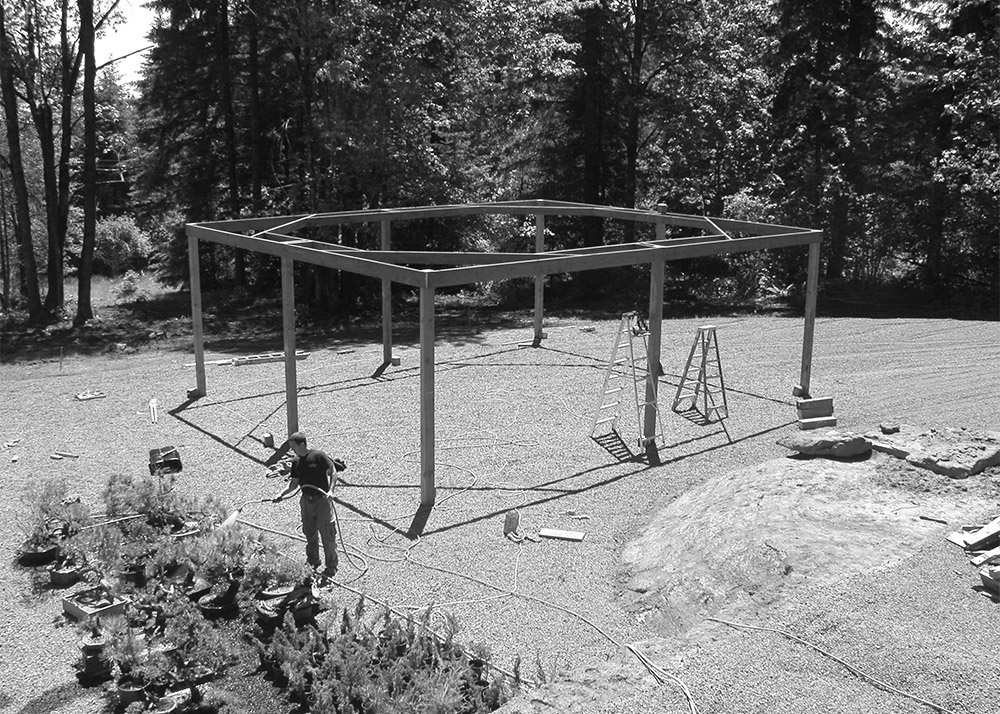 "Each staircase, stone, and pad follows the original contours of the land." 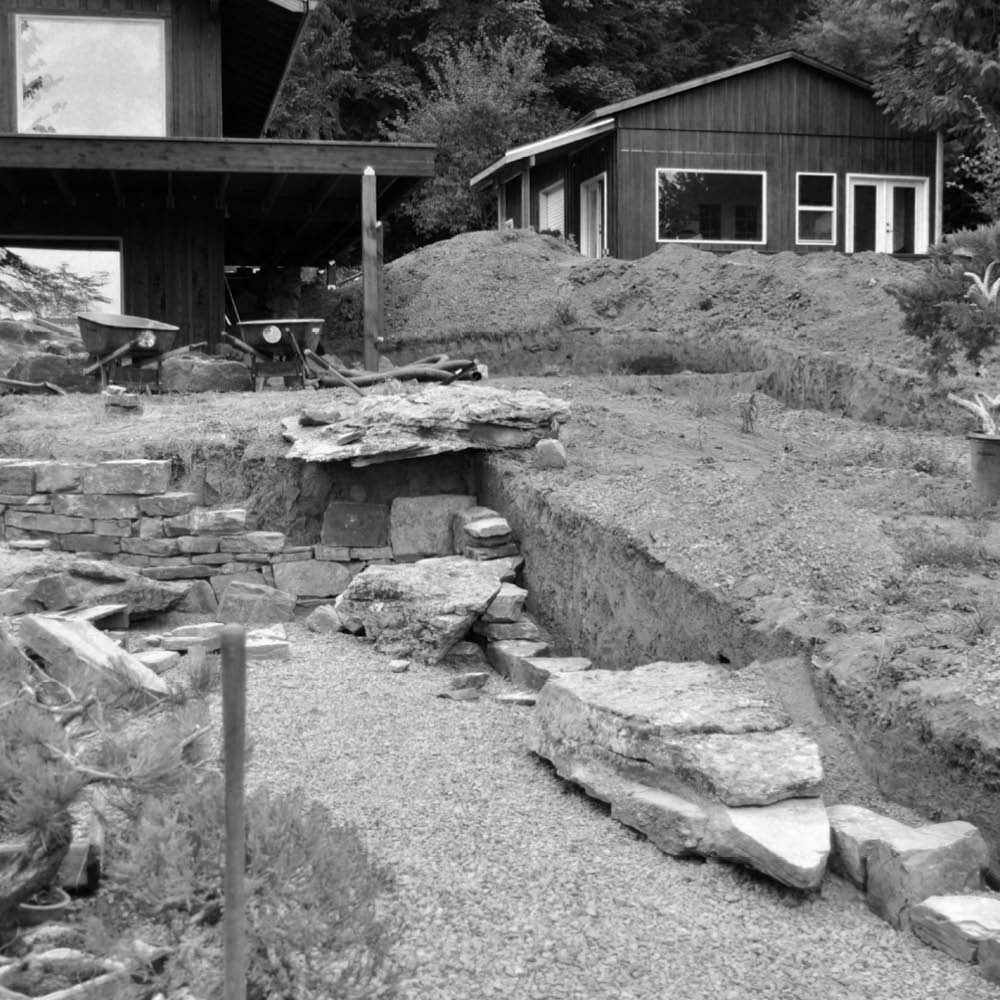 The first few structures that were built at Mirai were the greenhouse, the beams for the shading structure, and the old workshop. The spatial orientation with these structures lines up with the placement of the house. We built the shade structure with a copper-colored pressure-treated lumber, similar to the color of wire. This lumber, and the color of the treated wood, became a staple in all of the structures, benches, and buildings.

Each staircase, stone, and pad follows the original contours of the land. I used retaining walls, boulders, and monkey-pole walls to terrace these contours into defined lines. I had to work with the slope that really defines this property; it encouraged me to create segmented spaces where I could play with elevation and gain multiple vantage points. 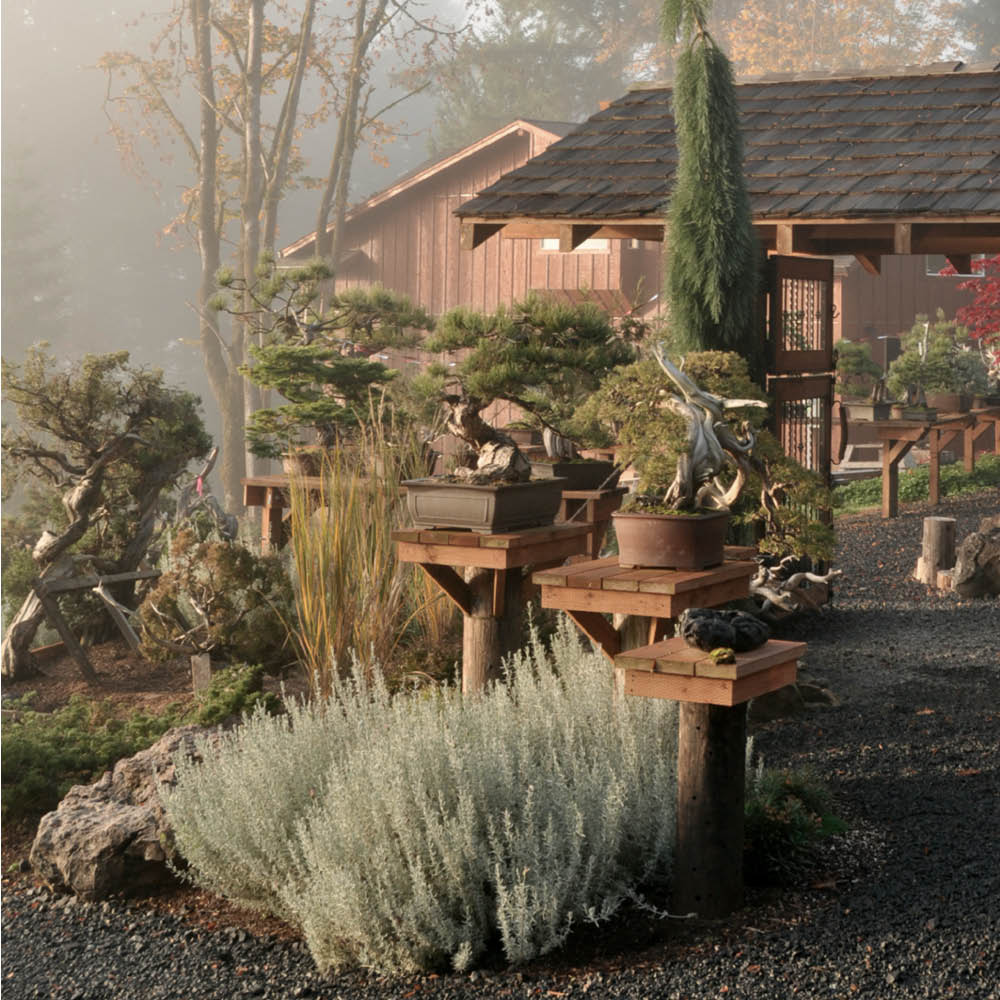 "An ecosystem is cultivated slowly, the same as a brand, and a company."

This slope also proved to be a challenge when it came to working on trees. Before we had motorized equipment, we had to haul the trees around on carts. We would cart them up the hill into the old workshop. It worked for a time, but as the collected material grew in size and the demand for education poured in, the needs of the operation became apparent.

In 2012, we built a brand new workshop to meet these needs. In this building we designed an incredible bonsai workshop, custom photography studio and a helm of an office. I knew that this building would now be the epicenter of Mirai—we affectionately call it ‘the barn.’ 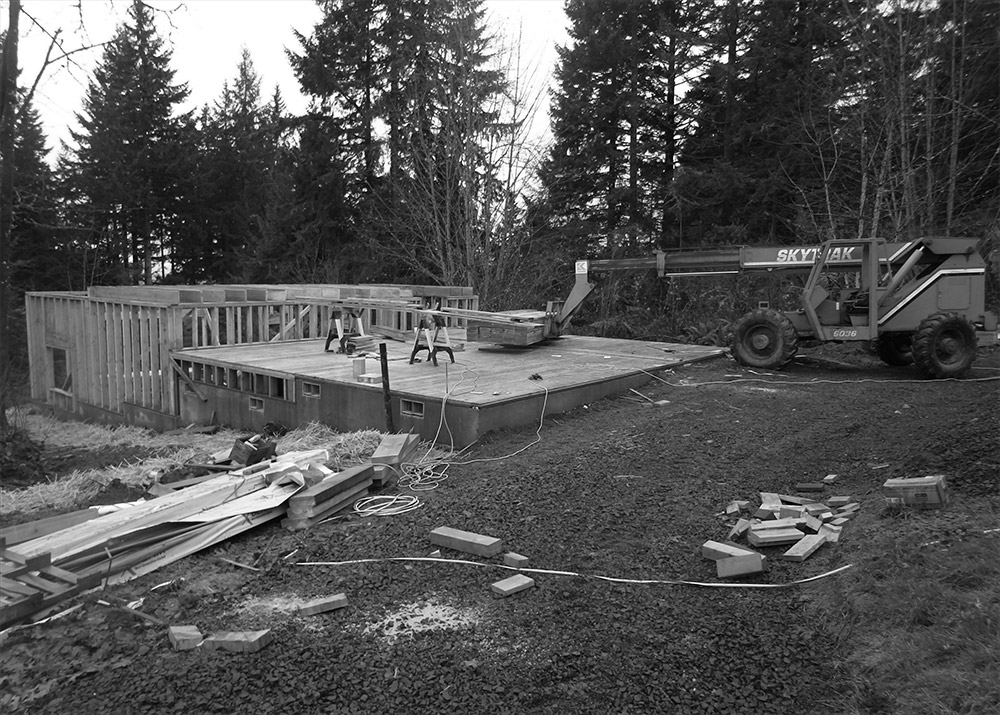 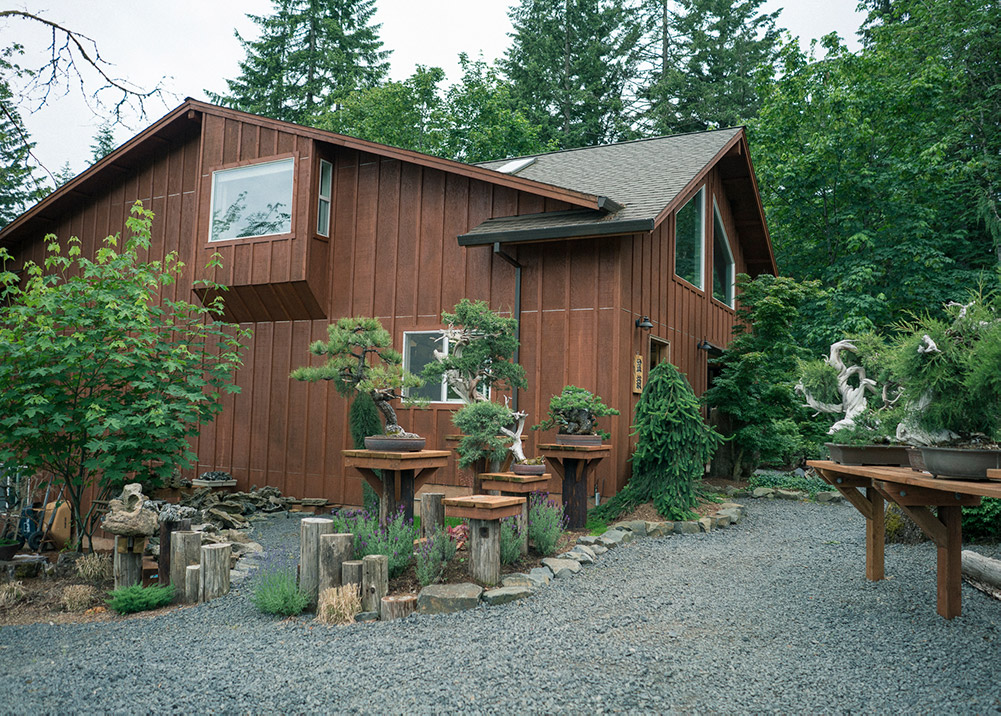 An ecosystem is cultivated slowly, the same as a brand, and a company. The two informed each other. And as Mirai iterated and grew, so did the landscape, filling in and expanding. In the coming years, we laid out more pads for a container yard, display area, and event space. We constructed benches upon benches, with complimenting monkey poles, until we felt that we reached the maximum capacity of trees that we could possibly take into our care at one time.

There is a clearly defined palette to this garden’s design, heavily referencing the local flora and geology. The copper-colored lumber shines next to the black basalt and powder-coated metal. The cool lavender, airy euonymus, and sweeping saffron grasses contrast against the deep red of young Japanese Maples. The weeping conifers hang over the walkways, as if beckoning. 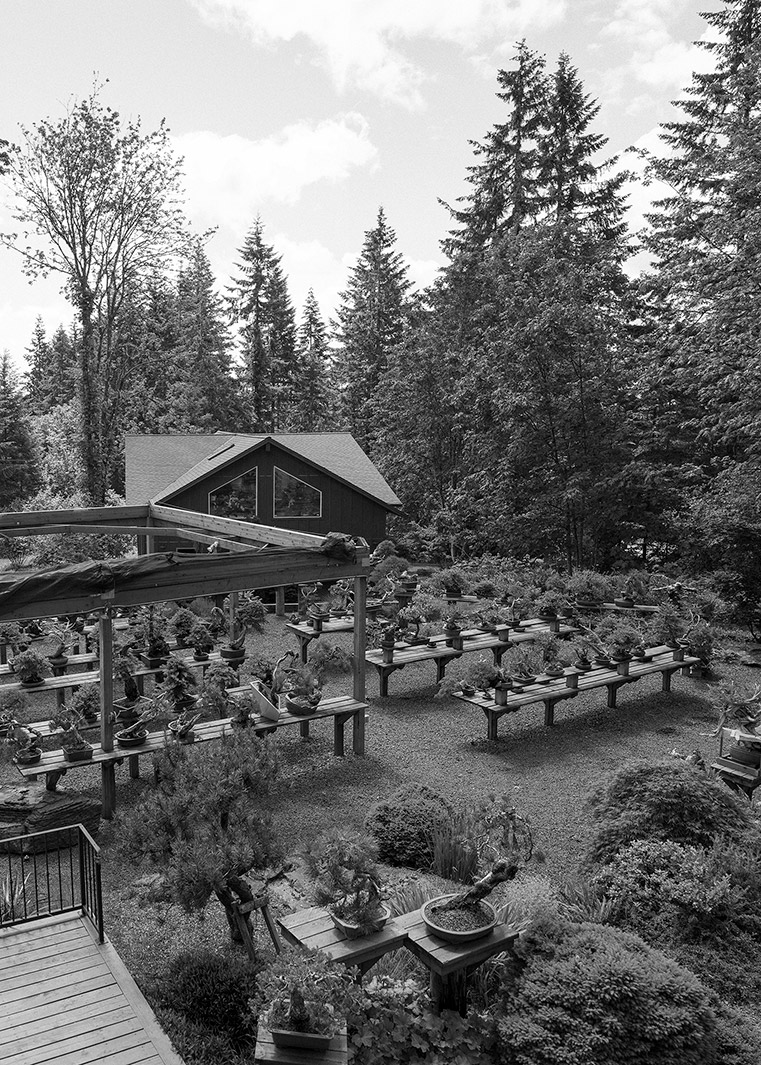 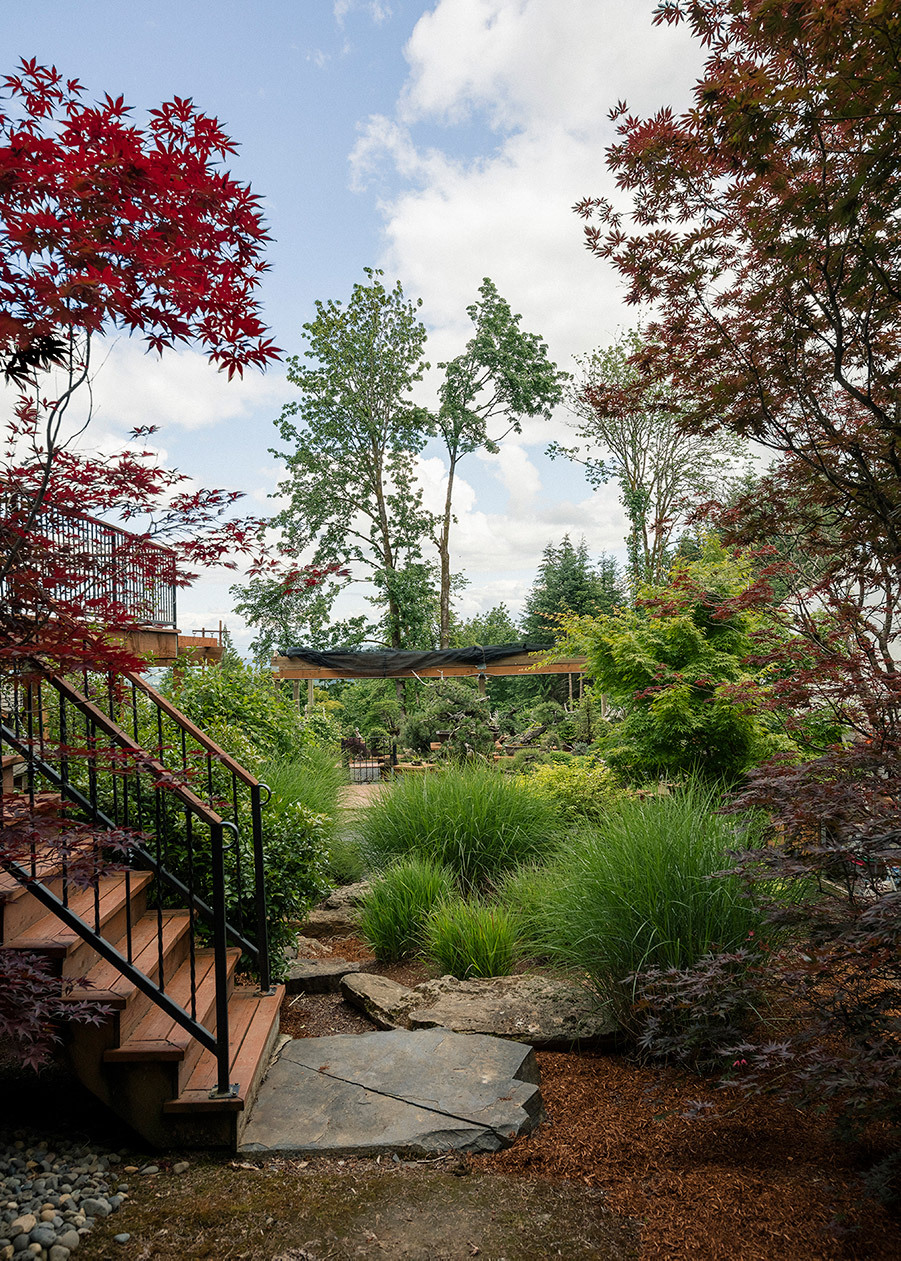 "This landscape is all about energy. We don’t do zen here."

Analogous colors, organic and industrial textures, juxtaposing planes and contours – these elements recursively pulse through the garden’s design, giving off a sense of dynamism. This landscape is all about energy. We don’t do zen here. It’s about visual stimulation and engagement with the structures, stones, and alcoves highlighting the trees.

My affinity for massive stones proved quite useful in the process of defining these areas. I have always felt that stone is an incredibly grounding element to a landscape. When you are forced to walk on and interact with it, you are immediately tuned into the landscape around you. 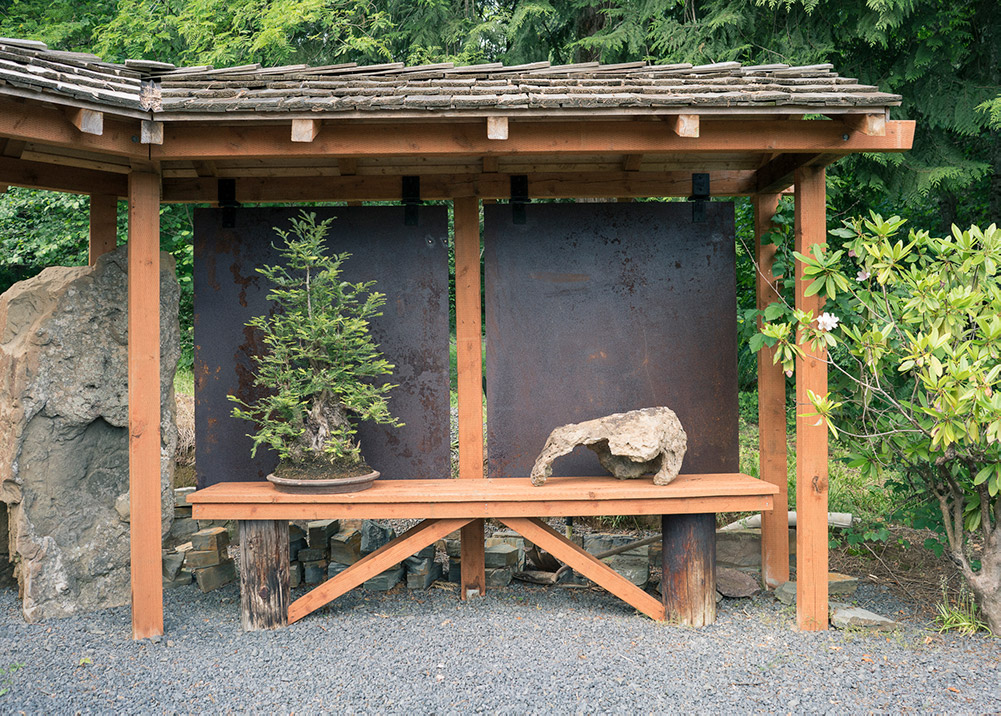 You will notice that there is no place to sit down at Mirai. That is intentional. This is a place to be actively engaging, not passively consuming. There’s a buzz to this place–everyone who comes here, whether daily or just visiting, will feel it. You see it in the trees, in the people, and in the garden itself.

This artform is born out of the landscape, but the trees are also affected by the ecosystem within which they grow. We strive to enrich the natural environment around the property with this garden, and you can observe a level of biodiversity that is highly sought-after with numerous animals, insects, and native plants thriving alongside the trees. 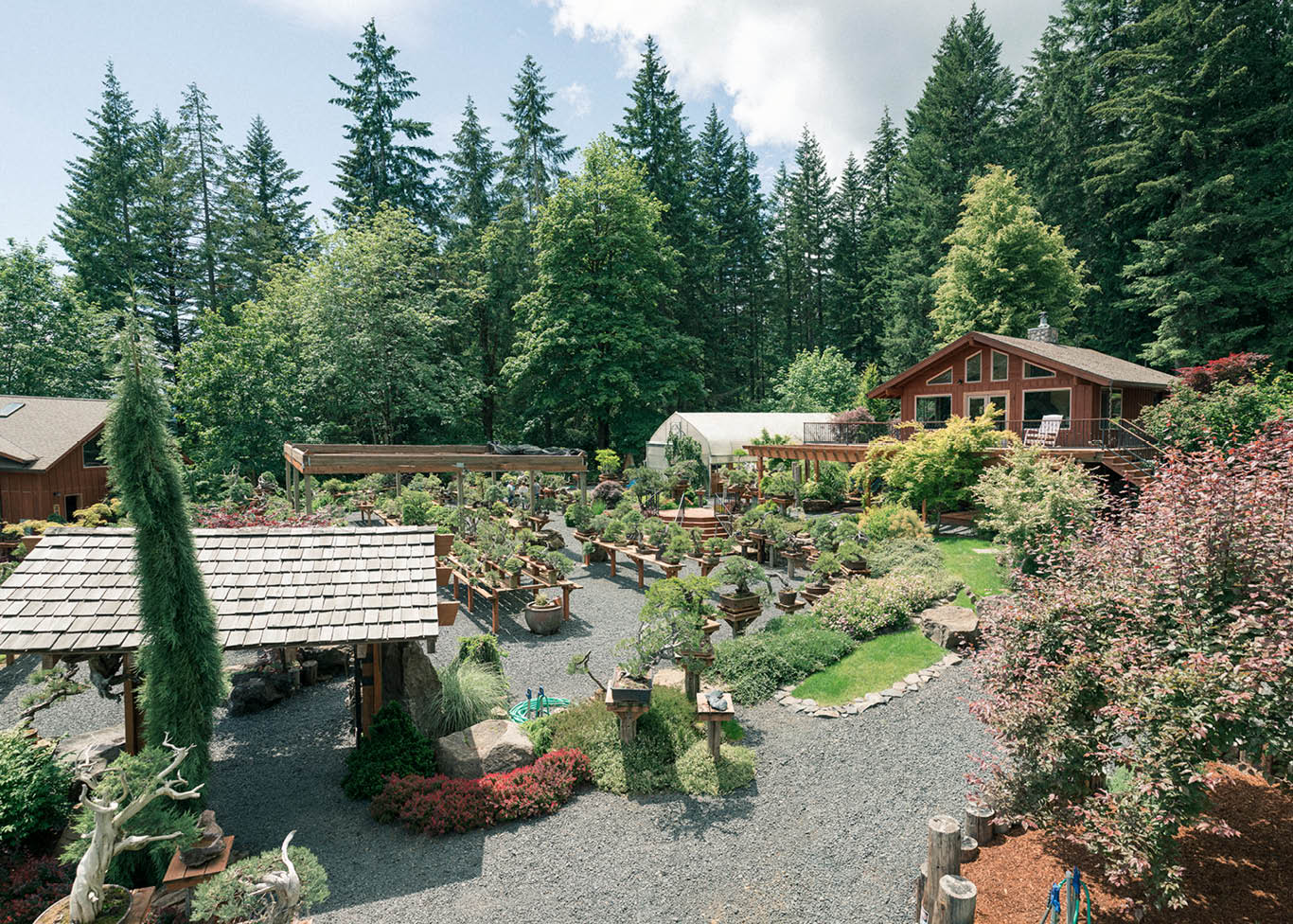 This garden and its structures hold the space for the Mirai team to dream big, execute boldly, and fail beautifully. While I feel that this garden is reaching a certain level of maturity, I do have bigger plans on the horizon for more structures or defined spaces. Of course, true to our name, this place is a work in progress, always evolving and with a spirit that is ever out of reach. 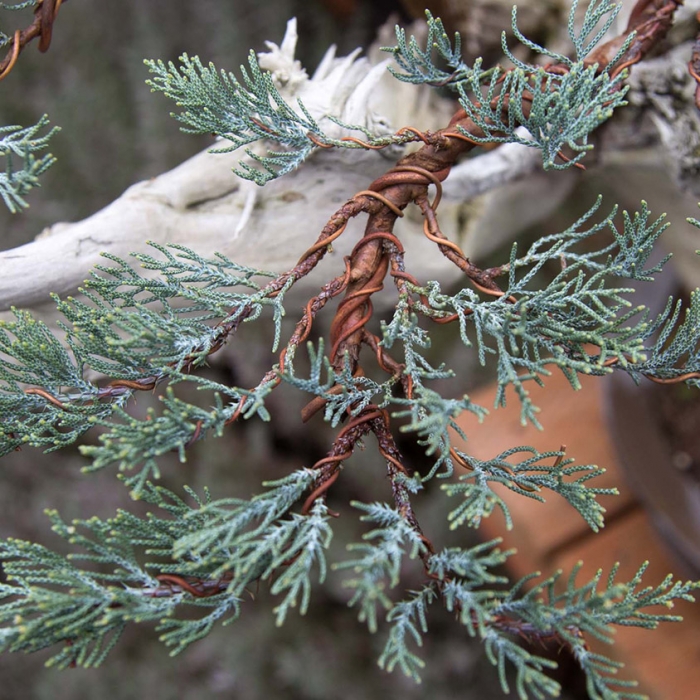