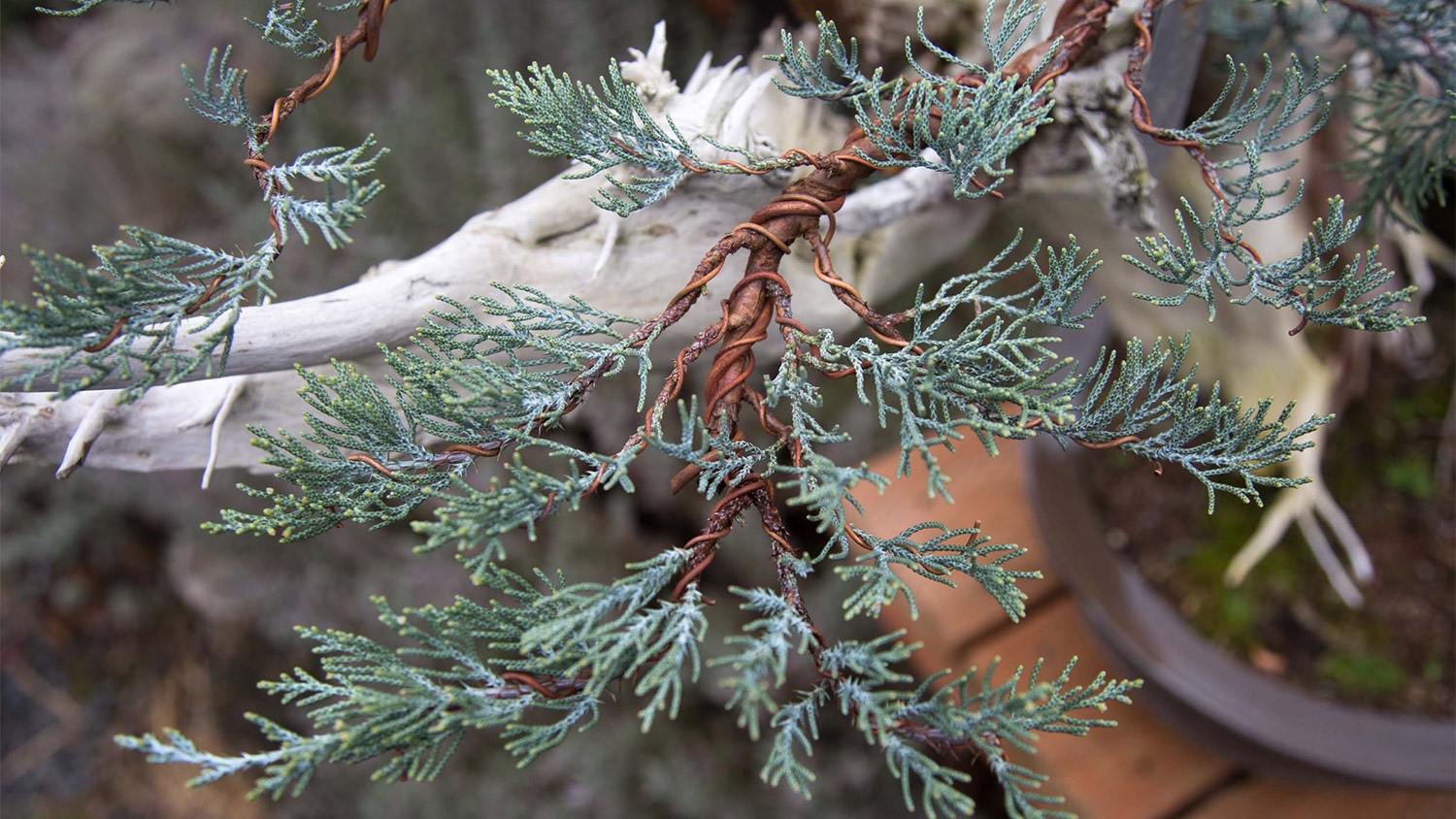 Structure your bonsai to continually improve

During the first years of apprenticeship I didn’t know why I was being told to prune branches in certain ways or to wire and shape them as I was doing. I just did it because I would get shouted at if I did it wrong. Sometimes the tree looked good immediately, other times it took a year or two to fill out. It wasn’t until I had lived with those branches for five years that I realised the “why”.

As hard as we try, we will never be able to stop a bonsai from growing, it will always keep getting bigger, increasing in volume and density. There comes a point when the foliage mass is too large or the branch tips too long and out of balance with the trunk. It is at this stage in the evolution of the tree that you realise the importance of a sustainable branch structure. 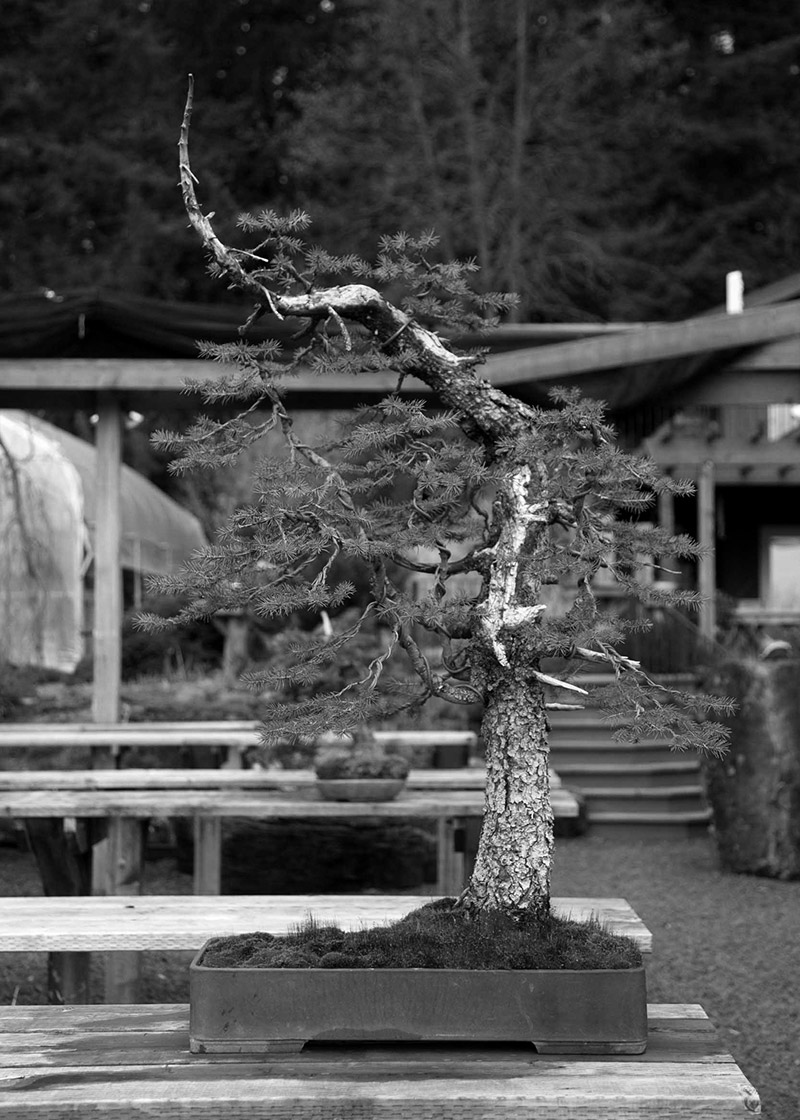 A sustainable design is one which can be easily maintained without major surgery, dramatic restyling and will soon recover back to the ideal density and size. A branch structure that once set in position, can be maintained with correct pruning, inducing adventitious budding and a minimal amount of wire.

An unsustainable design is one where the silhouette will look good in the short term, but once the wire is removed, or grows out of shape, it becomes increasingly difficult to maintain without resorting to unnatural contortions.

"A sustainable design is one which can be easily maintained without major surgery, dramatic restyling and will soon recover back to the ideal density and size."

Creating trees and foliage pads that will continue to improve and be easy to maintain over a long period should be the goal of any enthusiast be they beginner, intermediate or exhibiting at a national level. The techniques used to achieve such foliage pads or branch structures are exactly the same for trees that have a retail value of 50, 500, 5000 or 50,000.

If you can master the technique on a piece of starter material, there is no fundamental difference between that and a masterpiece tree. This concept is essentially a purely technical one, independent from the aesthetics of design. It doesn't matter if you subscribe to the wildly naturalistic or the highly refined and precisely sculpted schools of design, the difference between them is minor when considering the ideal branching structure. 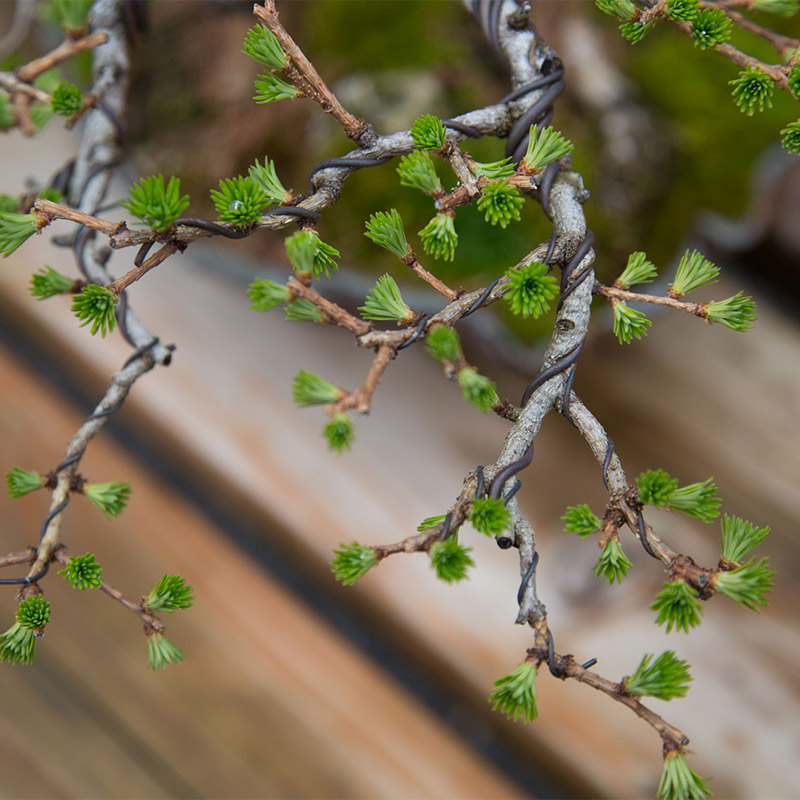 We can’t discuss ideal branching structure without mentioning bifurcation –it is one of the fundamental concepts of bonsai design. Bifurcation is the idea of a perfectly and continuously bifurcated branch structure, meaning that at each point on the tree, we split into two branches only at one node, then at the next node, we split into two, then into two and so on.

There are many reasons for trying to achieve this type of structure in both the primary, secondary and tertiary branches. It is around this point in proceedings that the lazy bonsai artists fall back on the catch all "trees in nature don't look like that..." argument and start to make statements about artificial Japanese plastic bonsai. As mentioned before, this concept is not solely related to aesthetics, but more the mechanics and the long term prospects of maintaining the tree in whatever style it may be.

Benefits of bifurcated branch structure: 1) Easy to wire, easy to unwire. Less stress on the tree; 2) Consistent spacing between branches makes for consistent density of foliage; 3) When cutting back and thinning out, each branch can be taken back by a similar amount, maintaining the shape; 4) No swelling at nodes, particularly important for deciduous species and those that swell rapidly; 5) Maximising volume and surface area of foliage pads with a minimal number of branches.

While a bifurcated branch structure is incredibly important, it is not the end-all be all. As with many founding principles, once you understand it, you will see the necessity to deviate from it depending on your goals and the tree. 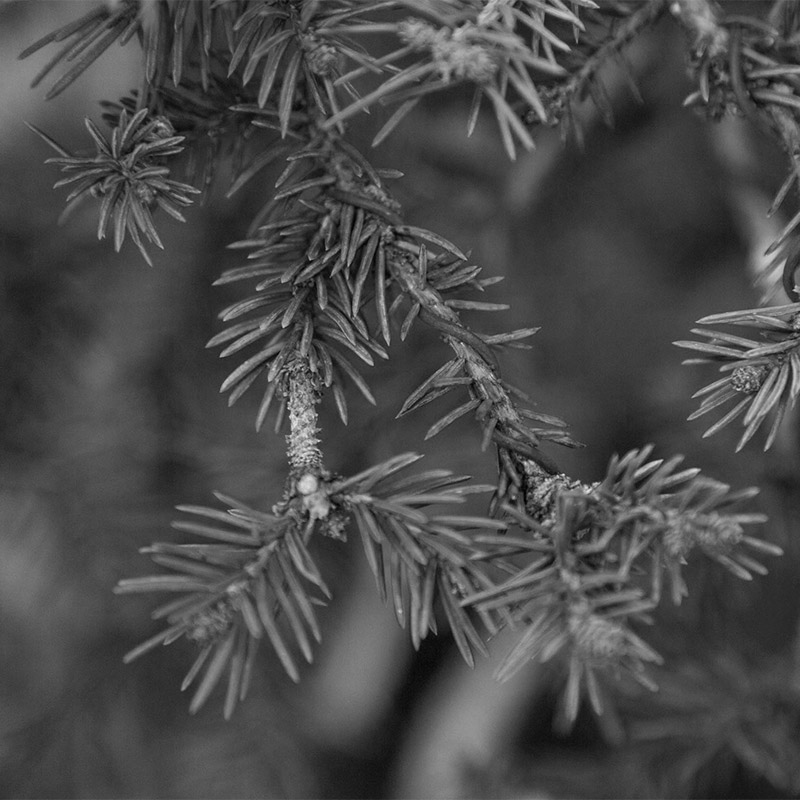 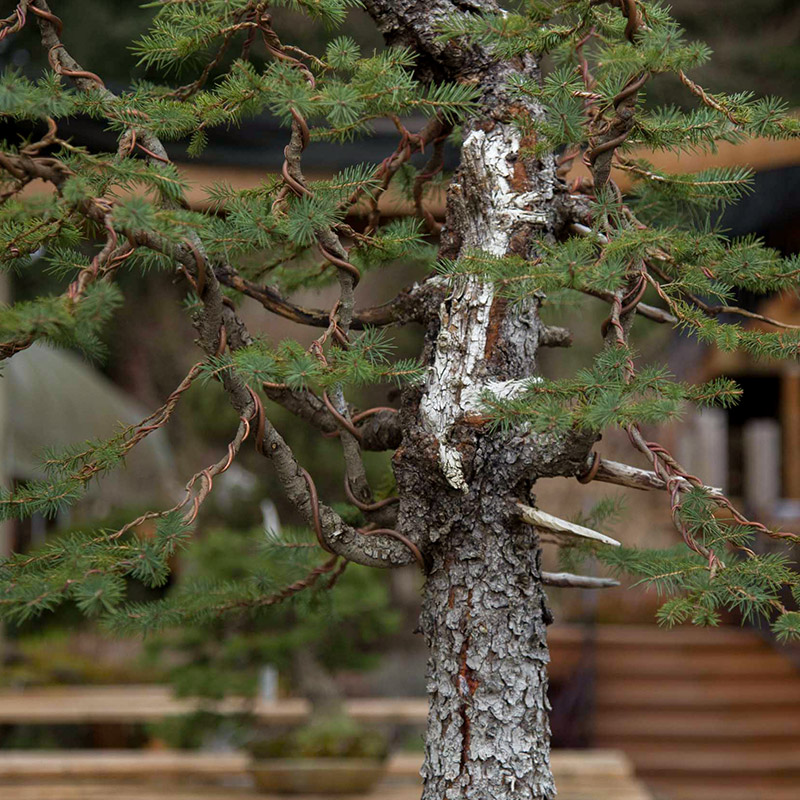 We may need to deviate from the perfectly bifurcated branch structure in order to add volume to foliage pads - in particular the apex - or to develop vigour and thickness. Being flexible and being able to adapt to each situation is essential for success, and not being rigid or obsessive. This is one of the keys to improving your bonsai practice, being able to adapt to the situation; and understanding rather than simply knowing, will allow that to happen.

When creating the fundamental structure, working on primary and secondary branches, you are building the skeleton, placing branches in such a way that when those shoots develop and grow out, they can be pruned to shape rather than needing to wire every single fine shoot.

Once the skeleton is set, and new growth is stopped at the tips, we normally see adventitious buds developing, most likely at an existing branch junction, but also half way along branches. If all of these are removed because they come from the same or very similar positions as other branches then there will never be any flesh on the skeleton. 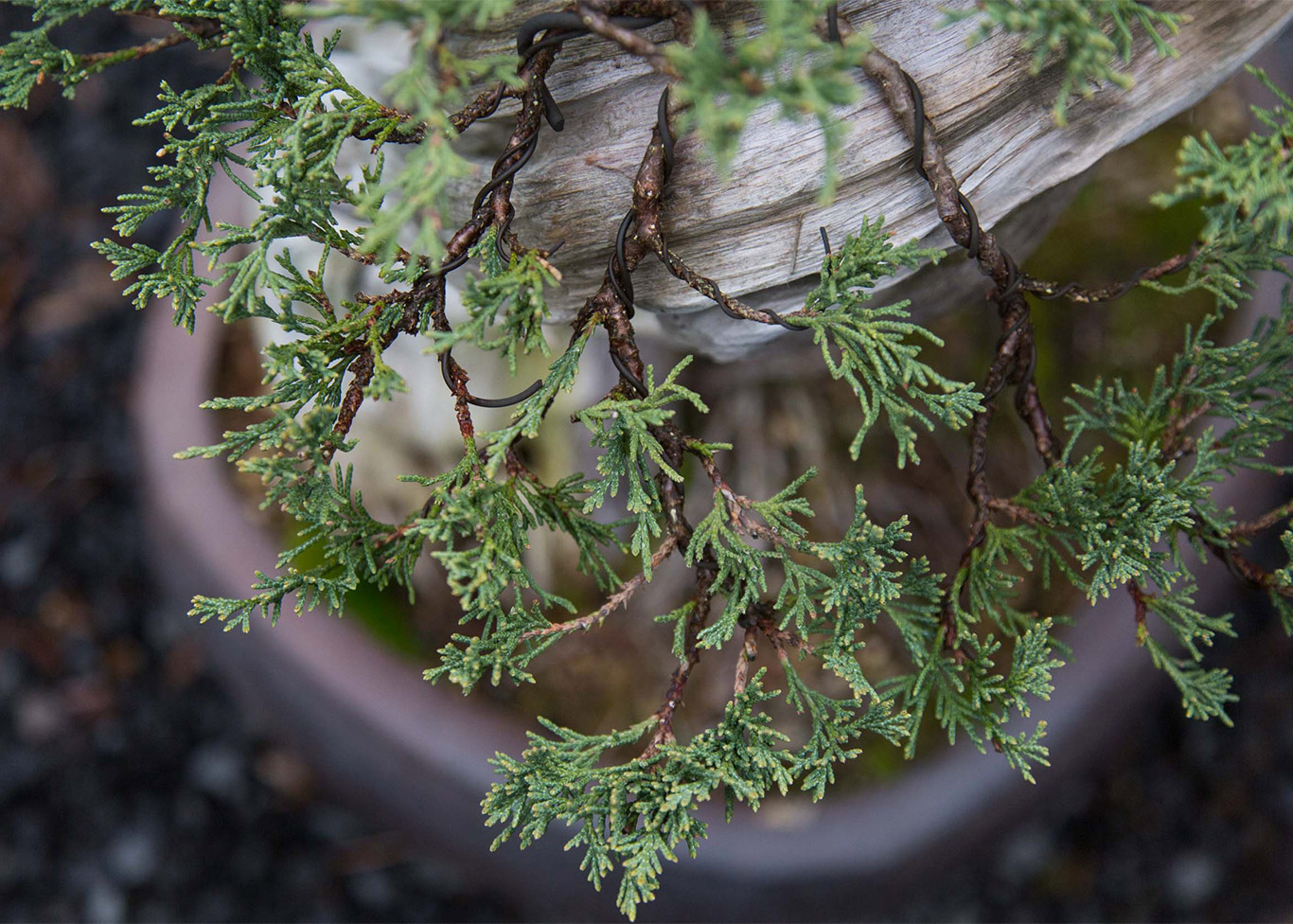 Equally if five shoots are allowed to develop at one node then we run into problems of excessive and uneven density of foliage. Finding that perfect middle ground of allowing multiple shoots, for example two “skeleton” branches and one “flesh” shoot is essential for creating dense, even and natural looking pads.

Problems start to arise however with this approach after several years, when either the “skeleton” branches become too old and lignified, or are short, stubby and thick; or when the “flesh” shoot starts to become a skeleton branch and lignified.

"Making things look good today rather than considering the medium and long term future of a tree will result in a poor bonsai; constantly chasing your tail to maintain something that is unsustainable."

Once this happens, a return to the fundamental skeleton structure is needed, and either cutting out the 'flesh' shoot, or removing the original skeleton branches to return to a thinner, more youthful shoot, closer into the trunk. Maintaining foliage pad so that they keep a consistent density and size requires thinning out and cutting back by one node every couple of years, and so building a structure that will allow that is essential for long term success.

A good example of such a structure can be seen from this example, something that is commonly seen in many trees. Consider the example of these two types of foliage pad creation on a pine.

In order to create the desired foliage pad size and shape, we want to have between 10 and 12 branch tips, each with a consistent number of needles around consistent sized buds.

Type A - Ten secondary branches, each with one branch tip.

Each has ten branch tips, each with ten needles around each one and so there is a consistent needle density.

As it grows and extends, each branch tip then sets two or three buds for the following year. If all of these are allowed to develop then we will have a foliage pad that is too dense and so they need to be thinned out.

If, in the following year, we remove one of the new shoots from Type A then we will return to the same starting point, plus the extra branch length. In the case of type A, in order to keep it in shape, the branches need to have more movement in them to keep them tight and compact, and if this is done year on year, we end up with a twisted mess, that continues to grow out incrementally. 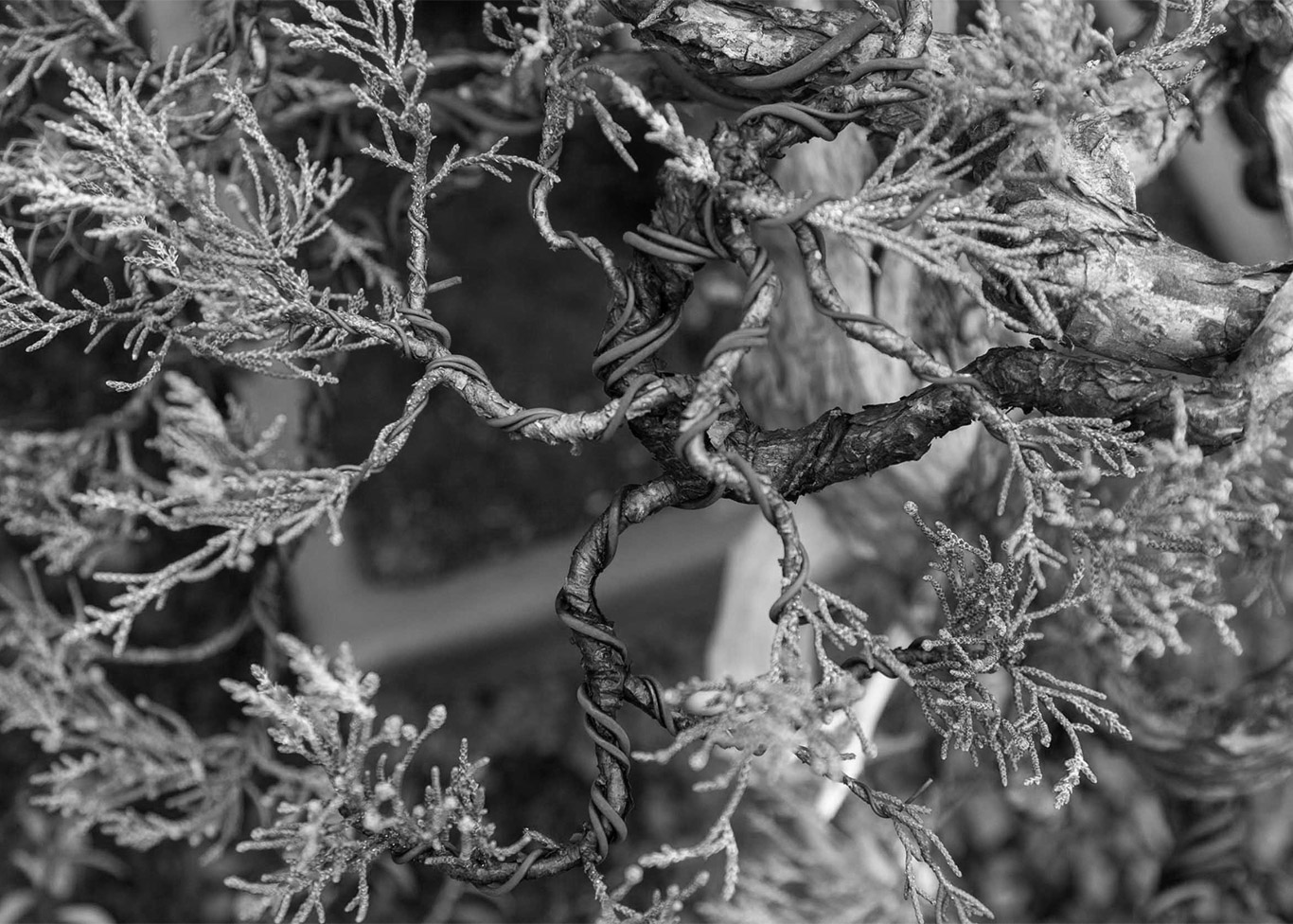 If however the structure is created by pruning back five of the secondary branches to leave five, each with two tertiary branches then we have the required ten branch tips and one hundred needles that we want to create a nice density - this is the vital step from taking the structure from something unsustainable to one that is sustainable long term.

Once the structure as shown in Type B has been achieved then we look to maintain that for a couple of years, by thinning out the buds, needles to keep that consistent density of ten branch tips. Over time, the secondary and tertiary branches will become too long and need to be pruned back. At this time we look to take the whole foliage pad back one step, cutting off the longest branches, then spreading out the existing branches to fill the space. This cycle will continue on year after year, keeping the same basic skeleton structure and density.

"Understanding and considering how branches will develop over the long term, putting thought into selective pruning and the creation of a self sustaining skeleton structure will allow that image to be sustained."

A fundamental concept of bonsai is to plan for the future and not just the immediate. Making things look good today rather than considering the medium and long term future of a tree will result in a poor bonsai; constantly chasing your tail to maintain something that is unsustainable. The pig tail branches get more compact, the silhouette gets bigger and bigger, major redesigns occur every time the tree outgrows its forced image. Many long term bonsai practitioners across the world have been through this process and realised that many of the techniques that were promoted by self-taught teachers who are kings of the instantaneous image simply do not play out over time. 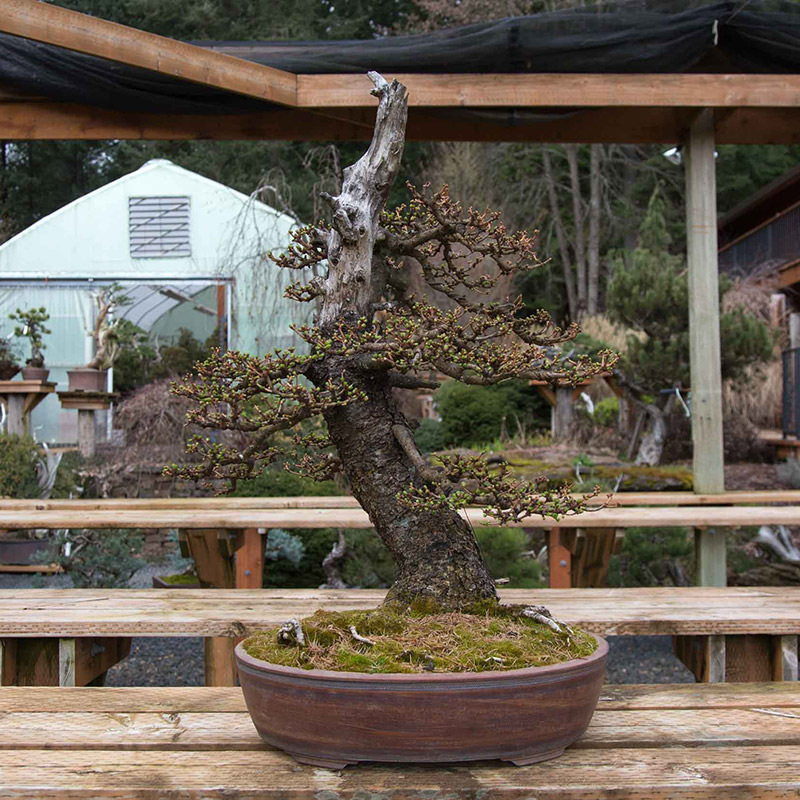 It is possible to build an instantaneous image but have it done in the correct and sustainable way. Understanding and considering how branches will develop over the long term, putting thought into selective pruning and the creation of a self sustaining skeleton structure will allow that image to be sustained. How this is done on each species of tree is slightly different yet the fundamental idea remains the same.

With evergreens versus deciduous species we have the issues of viewing fully clothed versus naked winter image, species with idiosyncratic natural growth habits such as constantly developing multiple shoots from one node; we may then start moving away from representing the natural growth habit of a tree and so stylistic issues come into play. These are concepts which then require an aspect of personal aesthetic input and consideration, yet the fundamental idea of trying to create a sustainable branch design that will mature over time is a cornerstone of bonsai.

Notes:
Written by - Peter Warren
All images and graphics by Bonsai Mirai 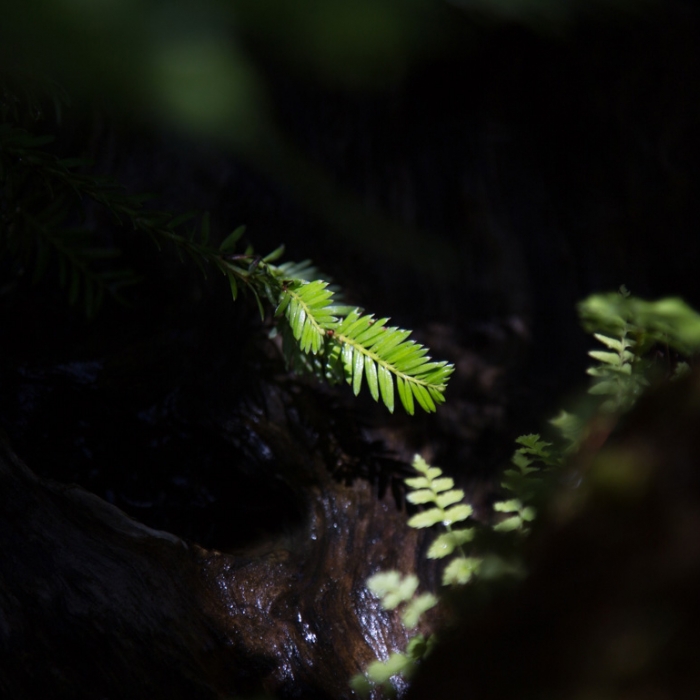 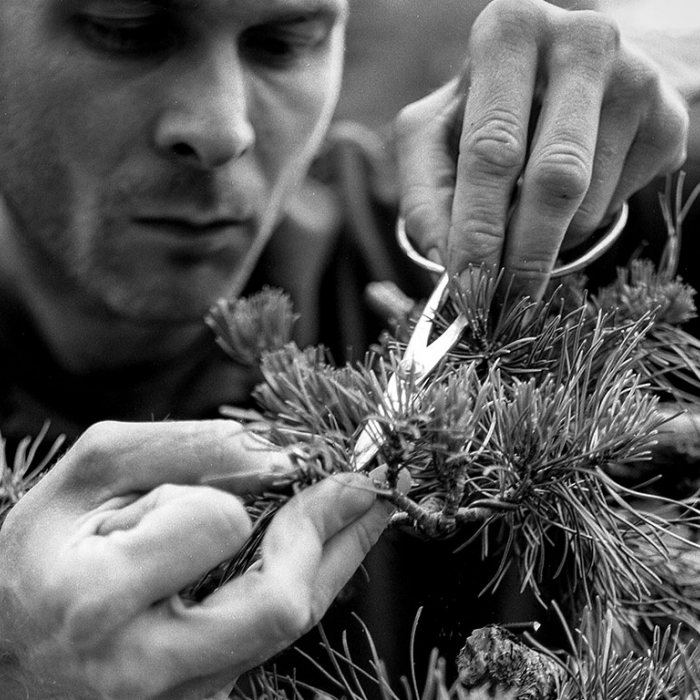 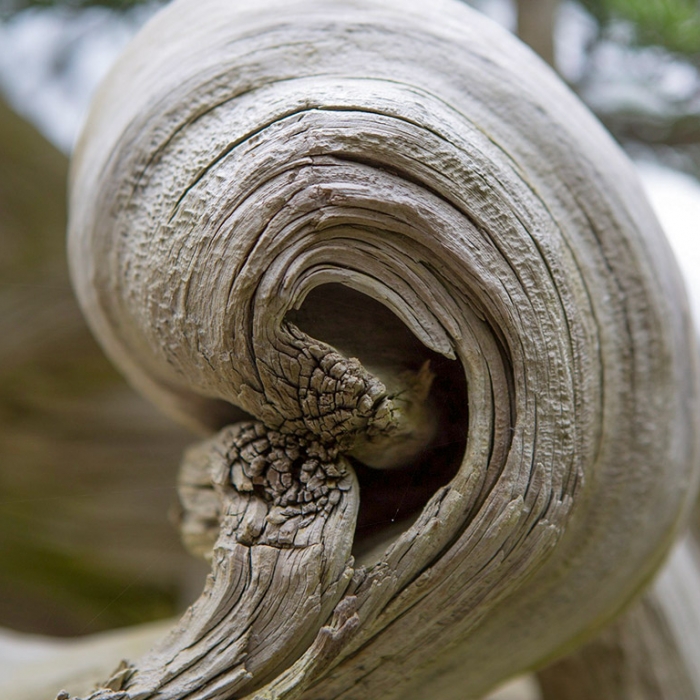