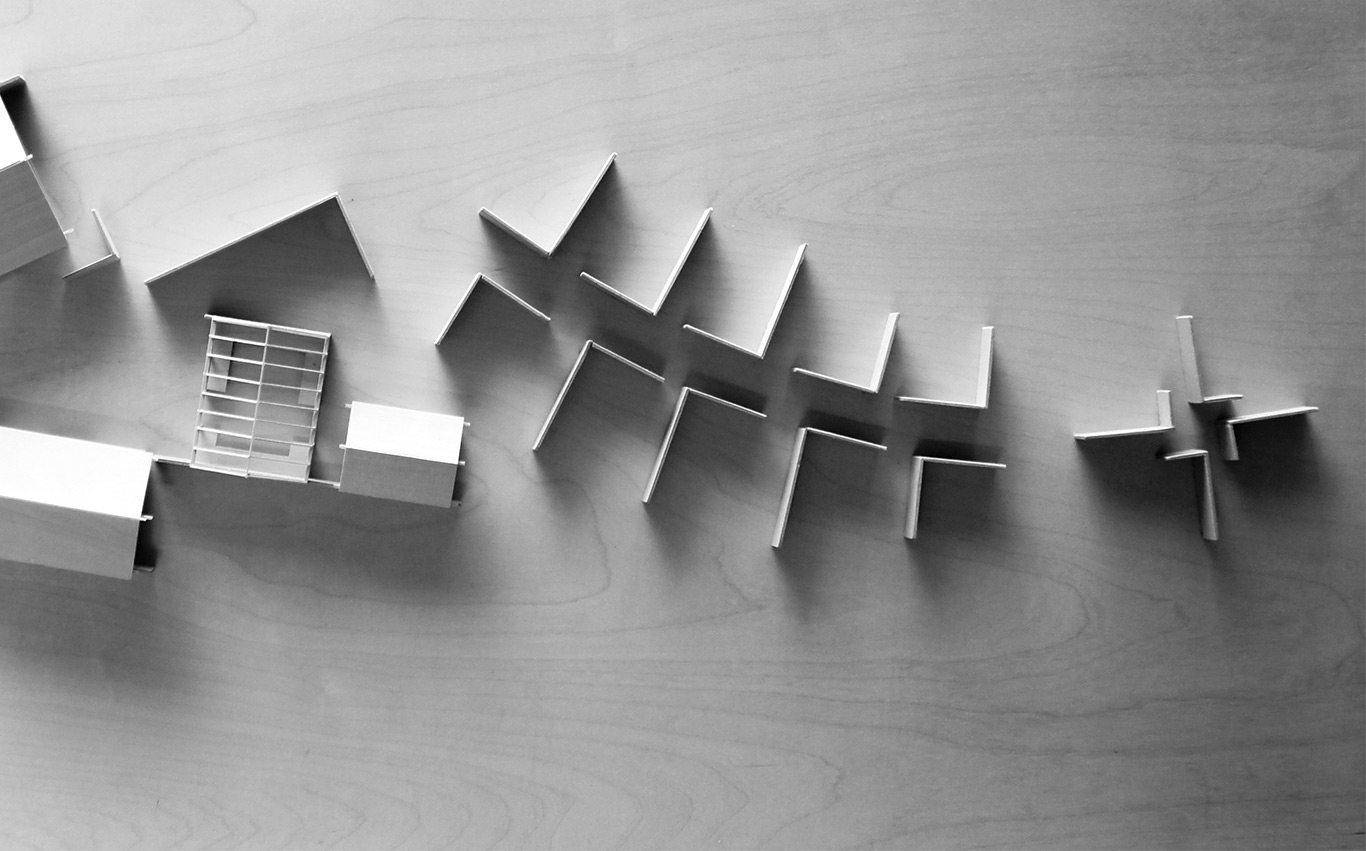 Walking through Pacific Bonsai Museum’s “Natives” from the eyes of the creators.

Exiting off I-5 somewhere between Tacoma and Seattle, we weren’t exactly sure if Siri had it right. She directed us along wide medians filled with monotonous greenery, passing one boxy cement edifice after the other—a conveyor belt of obscure 90’s era logos running past the truck’s windows.

The trees fanned open to expose a massive building— thick cement rising from the earth like a stoic rectangular temple. Plants cascaded up and along the walls, but in a way that looked intentional. Various columns and porticos lifted the visual weight, reflecting the vast surrounding space of scrupulous gardens and a wide pond.

We craned our necks to view the structure as is passed to our left. It effused masculine power of by-gone days—an empire hallowed by modernity. The truck turned up a gravel service road, lined by a stand of swaying conifers. The hum of I-5 mingled with rustling branches, a melody of the interplay between nature and man.

We parked the car, stretched our legs, and sought after Aarin Packard, the Curator of Pacific Bonsai Museum. As an eminent institution of American Bonsai, PBM has a history of cutting-edge, collaborative exhibits and Packard’s vision has carried on the torch with their latest installment, “Natives.”

Packard eyed our group, waved. With every step he was confronted by staff, volunteers—troops waiting for orders. He straggled over, hands were shook, niceties exchanged, and the deluge of questions commenced. Packard smiled, “let me show you around.” His eyes were wide and focused, an adrenaline-infused calm these types of events unload.

Aarin Packard’s initial vision for “Natives” began with an idea of taking bonsai into nature, placing them in view of a vista, and then using some grass or nearby plants as an accent—a sort of in-situ re-wilding. He ran with this concept, bringing the true native elements of a wild landscape and incorporating that into an age-old concept—the three point bonsai display.

We walked into the exhibit, following the curves of zen-raked gravel. Thick slabs of cement jutted into various alcoves, their sturdiness juxtaposed against the shifting weather and conifers above. This architectural contrast, of wilderness and hefty cement, echoed the stately Weyerhaeuser campus we passed before. Turning a corner, the exhibit hit us. 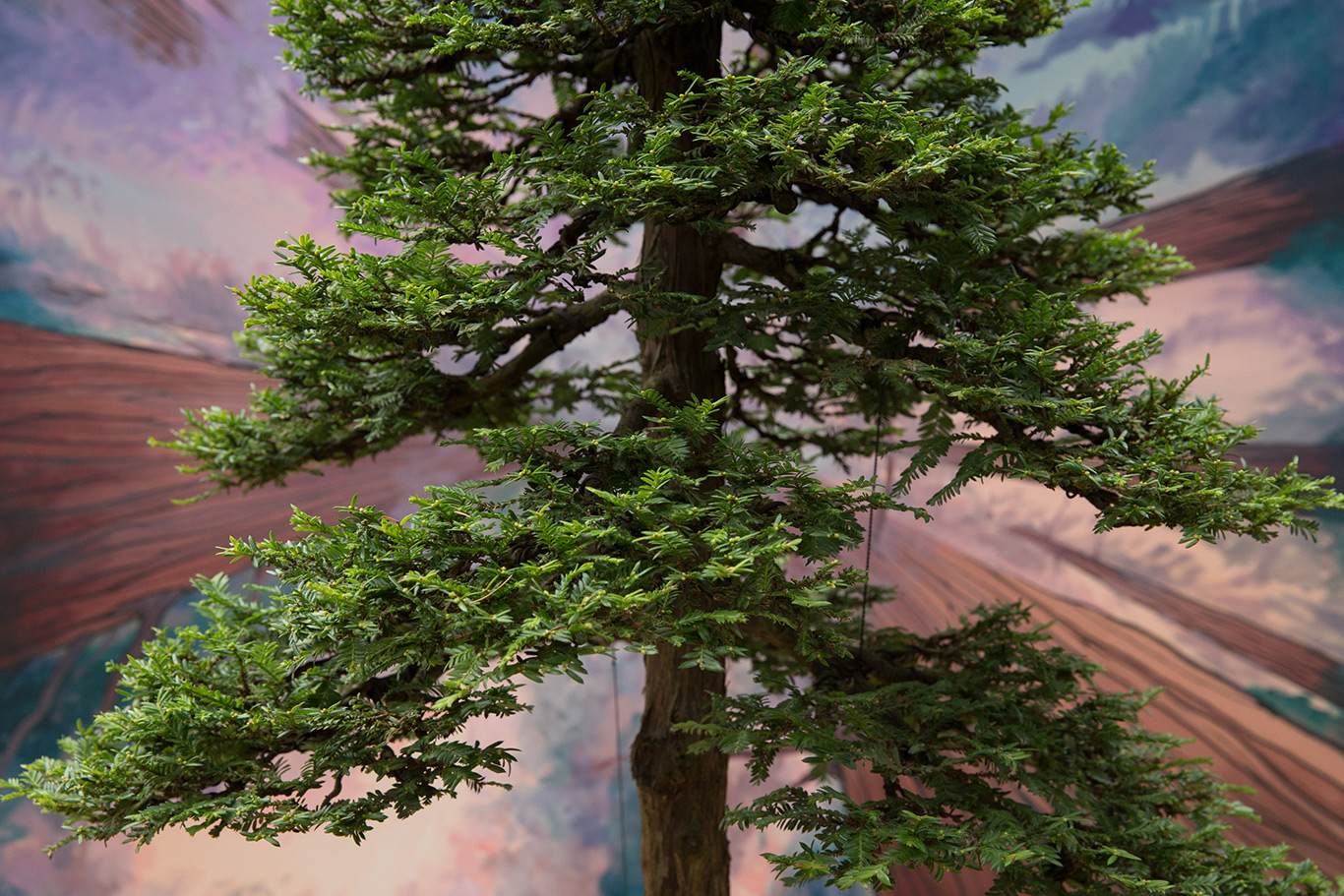 "I wanted to do a show that was entirely native trees." 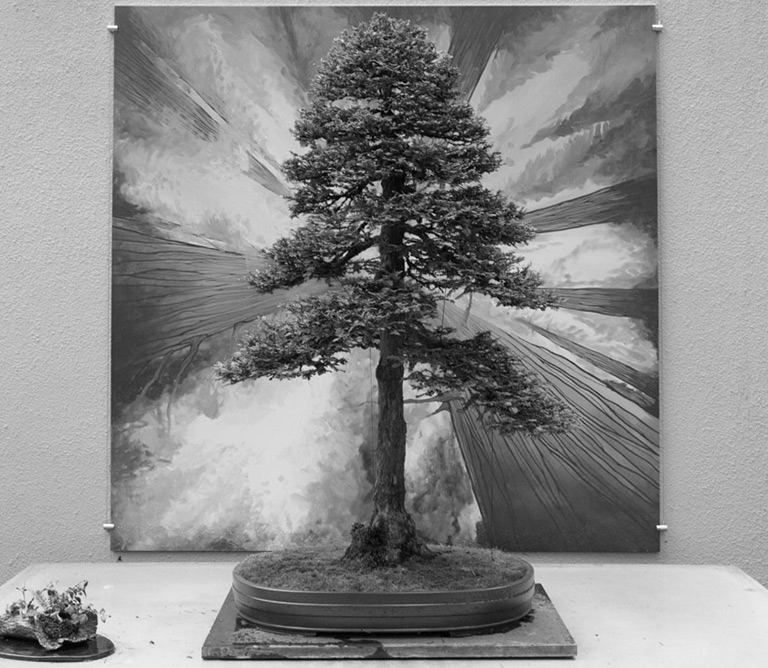 The displays consist of a featured tree, painting, and accent – and a pair of complimentary bonsai perched to the left. With species ranging from high-alpine Rockies to the swamps of Florida, Packard shared; “I wanted to do a show that was entirely native trees to highlight the diversity of the trees in North America and also the landscapes.”

The landscapes are noted by the accents and the accompanying art. American kusamono artist, Young Choe, created the accents with plants specific to the native environment of the tree, paired with ceramics specially crafted by Vicki Chamberlain. Chamberlain incorporated components from the actual environments themselves—ash from Mount St. Helens,  soil from the Sierras etc.—into the very clay substrate, a groundbreaking technique. 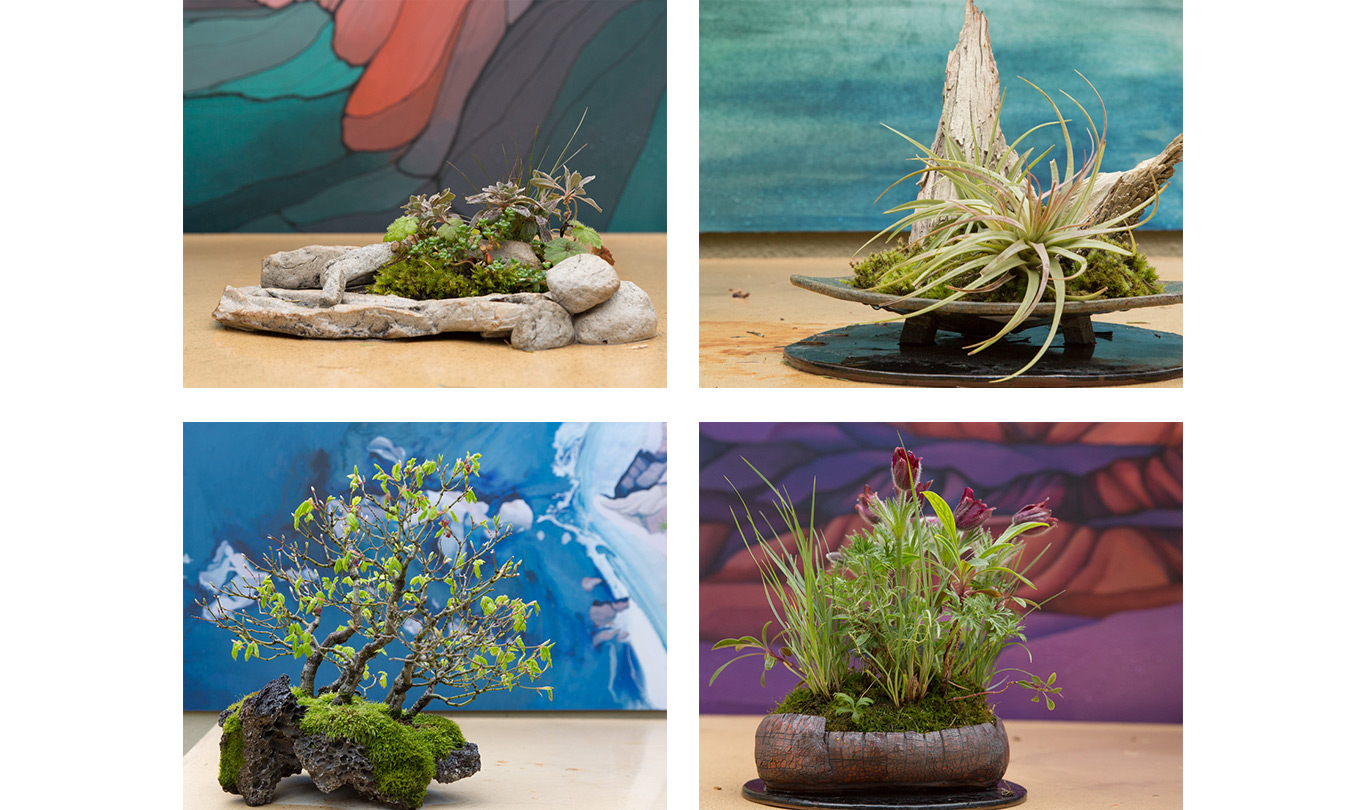 Behind the tree hangs artwork by Swiss artist, Corinne Weidmann—who goes by the artist name Iuna Tinta. It is the most surprising and compelling component of "Natives," each painting an explosive exploration of specific American landscapes. Colors and lines vibrate in a topographical waltz, reorienting the viewer to acknowledge a seemingly static subject with a dynamic sense of geological force and time.

As Ryan Neil commented; "Just the sheer color, if you stand back and just pay attention to that one artistic principle, what Cori’s paintings are bringing out in the trees is something I’ve never ever before witnessed.” 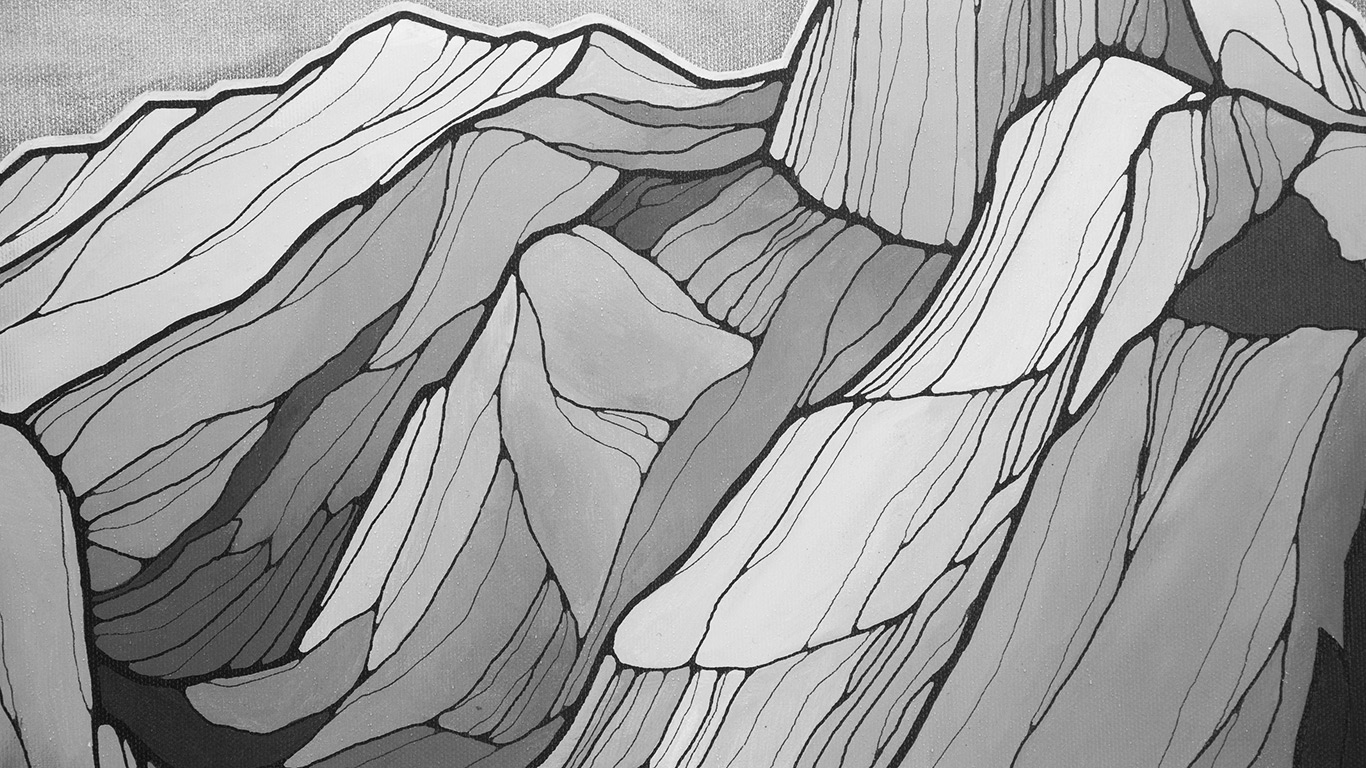 "What Cori’s paintings are bringing out in the trees is something I’ve neverever before witnessed.” 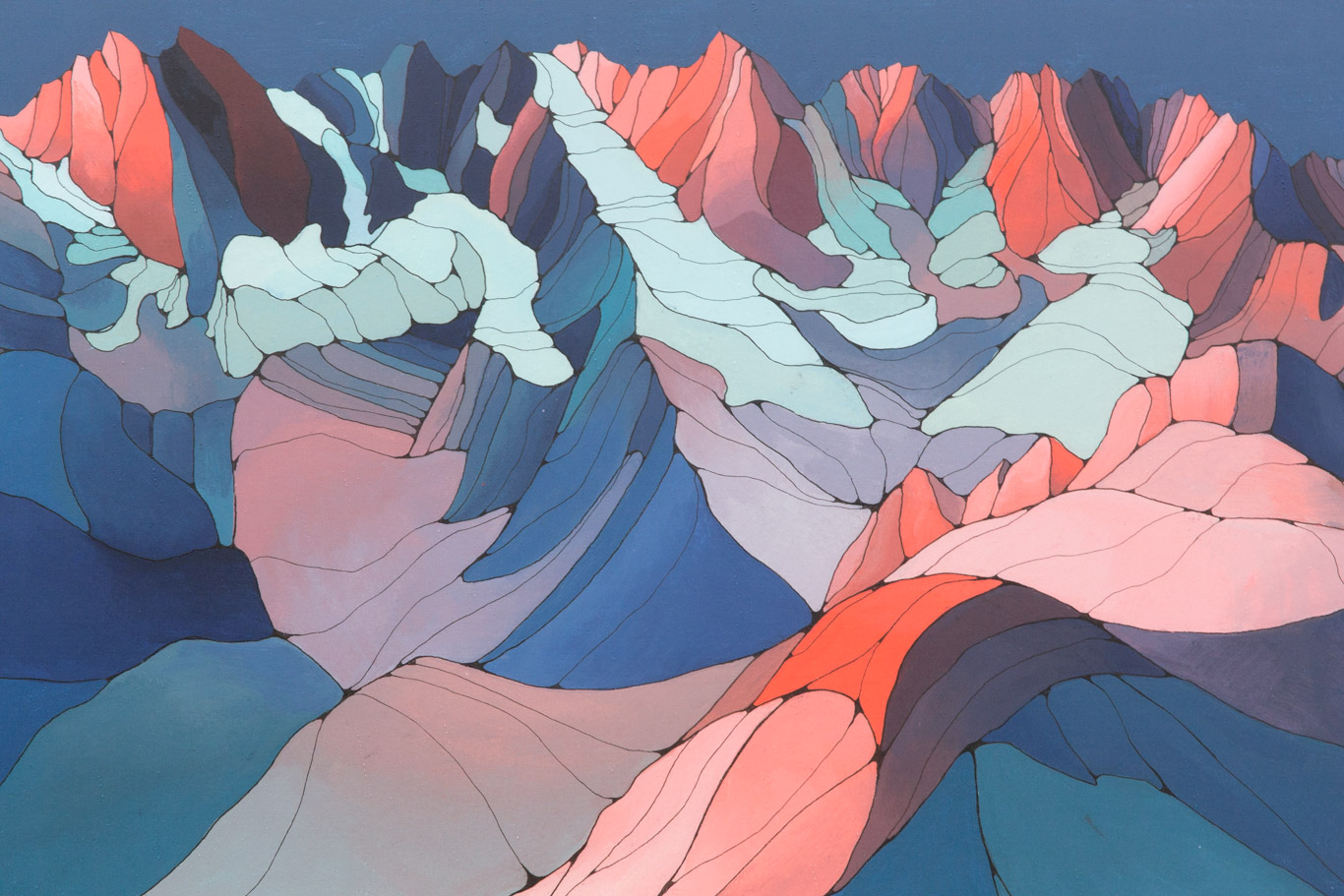 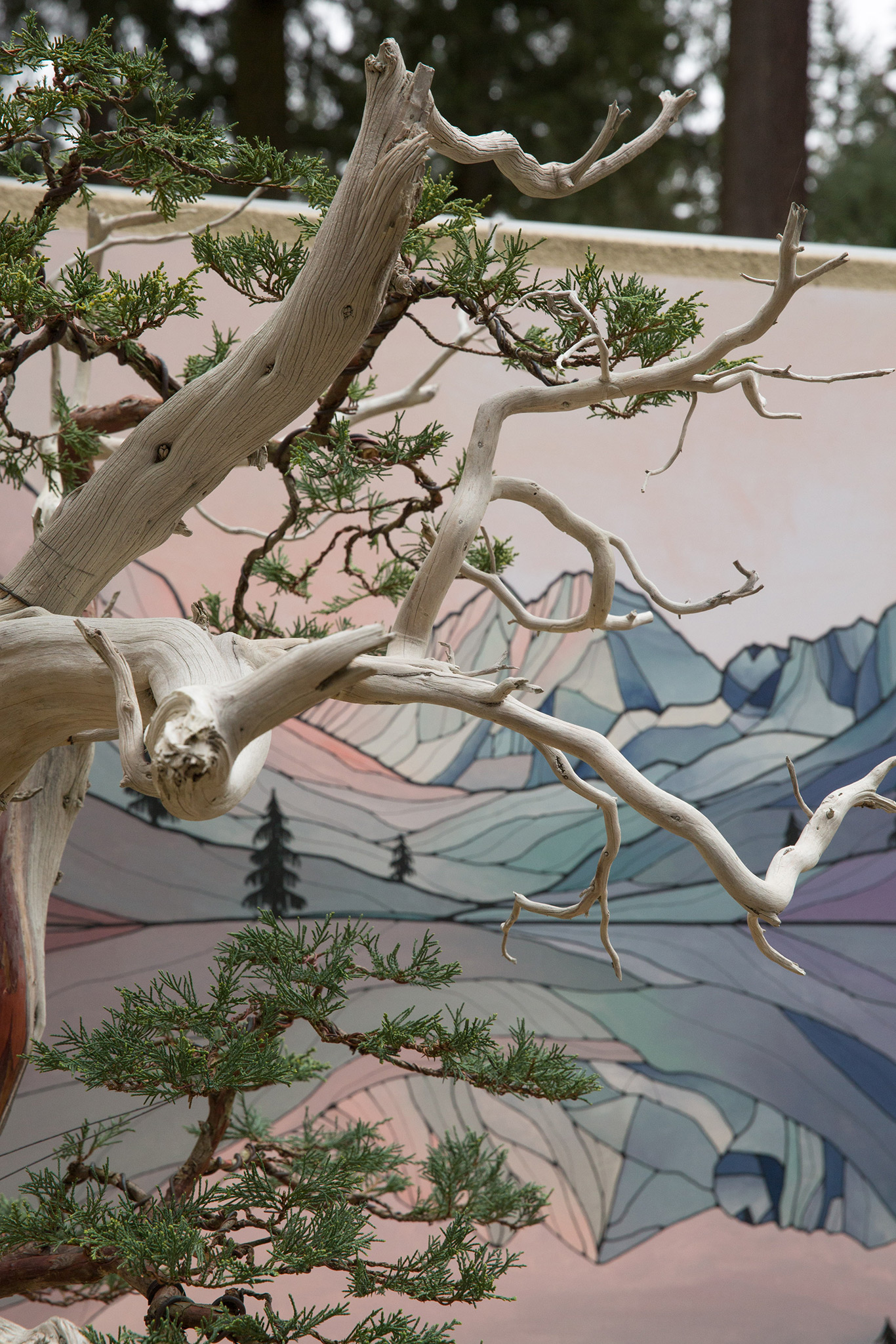 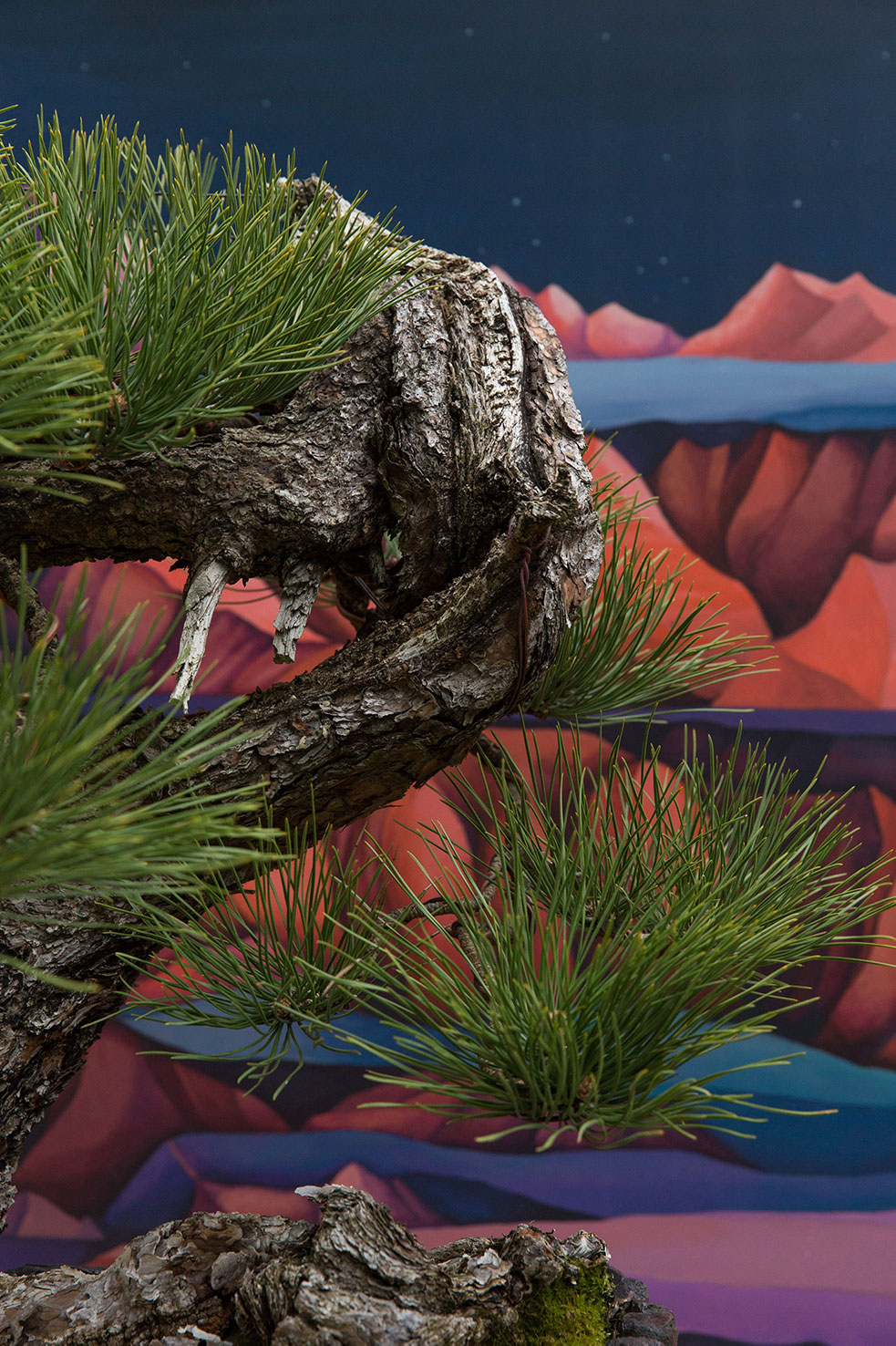 Once again, the Pacific Bonsai Museum pushes the limit, furthering the public's understanding of American Bonsai with its institutional merit. "Natives" converges the talents of individual artists and artforms, while instigating a high-level commentary on the relationship between art, horticulture, wilderness, and the individual.

Curating avant-garde displays is a thread in the fabric of PBM's history, a museum whose foundings hark back to a historic storm and a corporate colossus.

As told by Executive Director, Kathy McCabe; "In the 60’s, there was a giant storm here. It was the Columbus day storm and so much timber was felled by the storm, Weyerhaeuser didn’t know what to do with it. That's when the relationship with Japan in terms of exporting timber began." The Pacific Bonsai Museum's roots were founded, "because of a surplus, which was because of a storm, out of calamity comes opportunity." 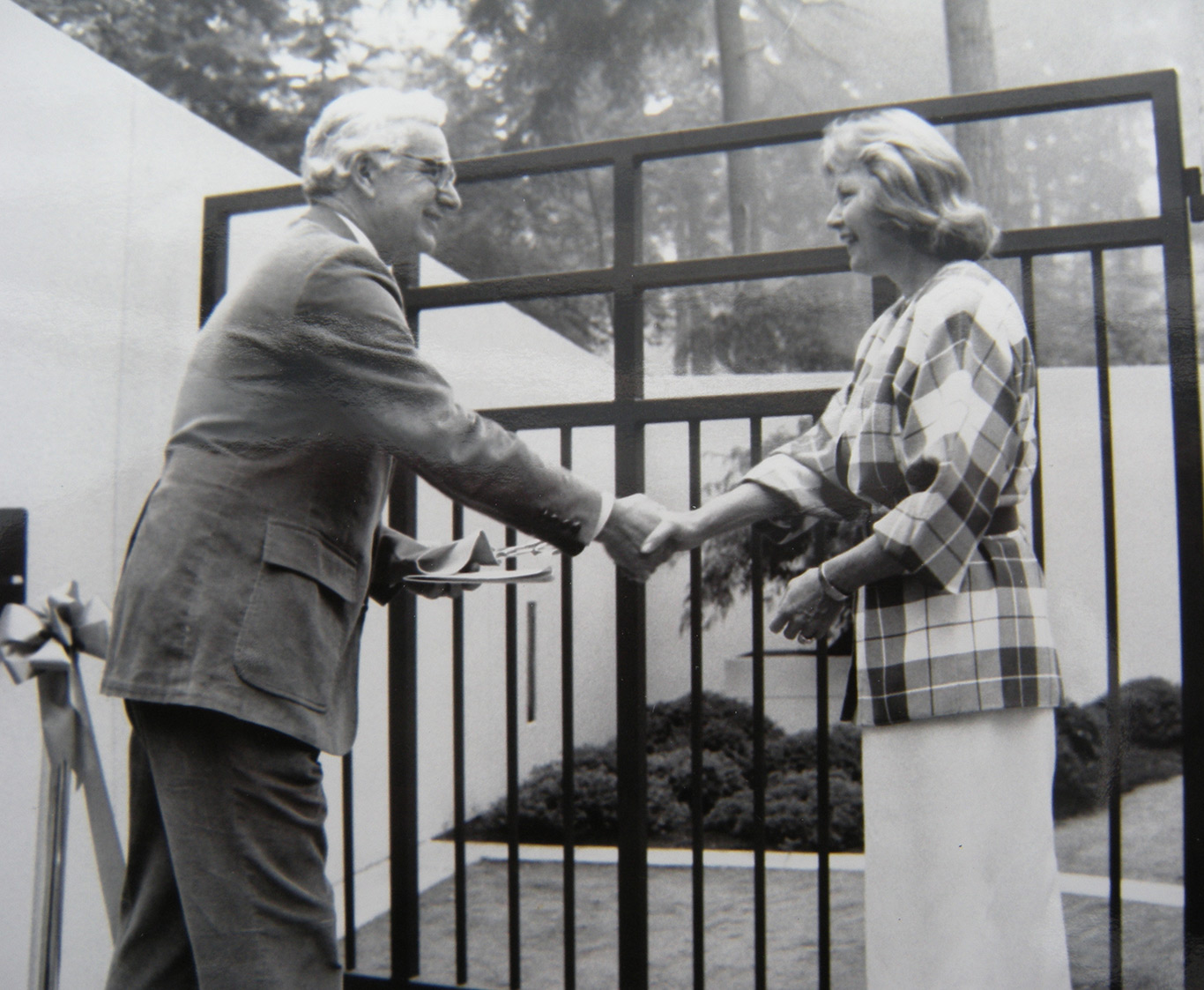 Weyerhaeuser has long been one of the largest timber companies in the world. In 1989, to honor their long-standing trade relationship with Japan in conjunction with the Washington state centennial, the Pacific Rim Bonsai Collection was established.

In time, the corporation evolved and the headquarters moved to Seattle. In that restructuring, all of the bonsai owned by Weyerhaeuser were donated to what is now known as the Pacific Bonsai Museum. The exchange was founded on the understanding that the newly established non-profit would uphold the legacy of the Weyerhaeuser Company and the vision for bonsai art established by George Weyerhaeuser, Sr. 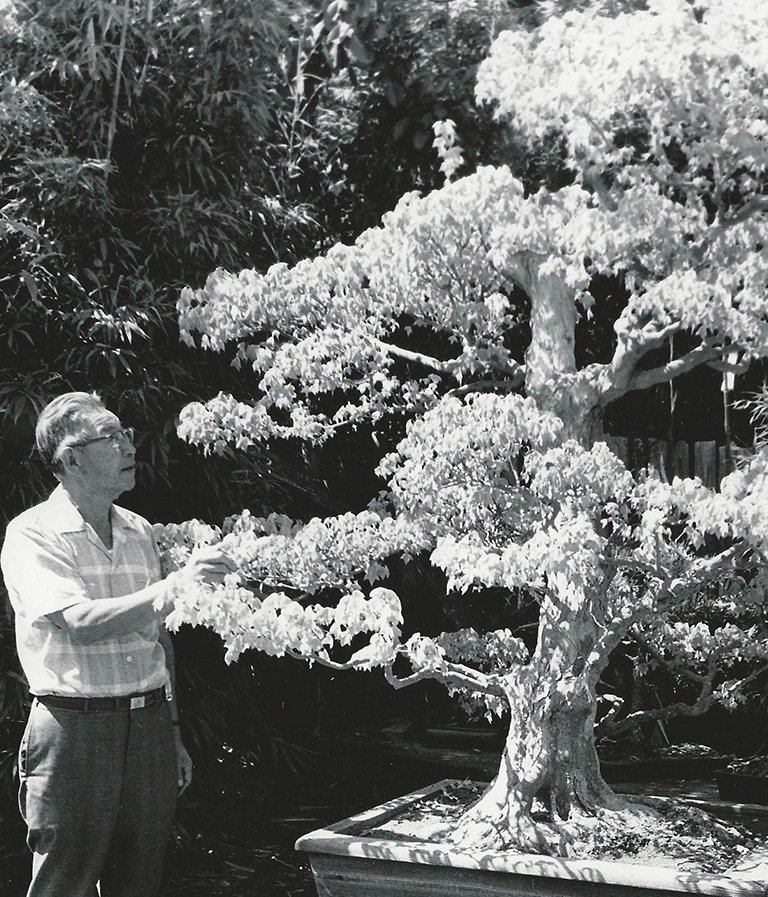 With few bonsai museums worldwide, let alone in the United States, PBM has a distinct approach to the way they handle and interpret their collection. “Most places, they just put (the bonsai) out on pedestals in some sort of designed garden space to be admired as botanical specimens,” Packard remarked. But the legacy of the Pacific Bonsai Museum, and what gives an edge, is that it was founded as an art-first establishment.

The depth of intention behind the exhibits, the curated alcoves, the quality and diversity of the material, and the tension in display between avant-garde and traditional—all of these elements distinguish PBM as a institution to be respected. They have been at the forefront of the evolution of American Bonsai, featuring prominent bonsai professionals, and continually merging the realms of nature, culture, and the individual.

PBM seeks to restructure the impression of bonsai as a ornamental figment of Japanese culture, and redefine it as a wider, accessible art-form, something people from the Pacific Northwest or ‘the West’ can connect with.

“At minimum, it’s a tree,” Packard explained, “everyone can relate to a tree.”  In its most basic interpretation, “Natives” directly conjures this relationship. It’s the tree, the landscape, the organic accent—the layers transport you back to a place, a memory, a feeling specific to North American environments.

“I suddenly had the smell of the trees, the feeling, I felt like I so desperately want to go back there,” Weidmann described of her process while creating the accompanying artwork. 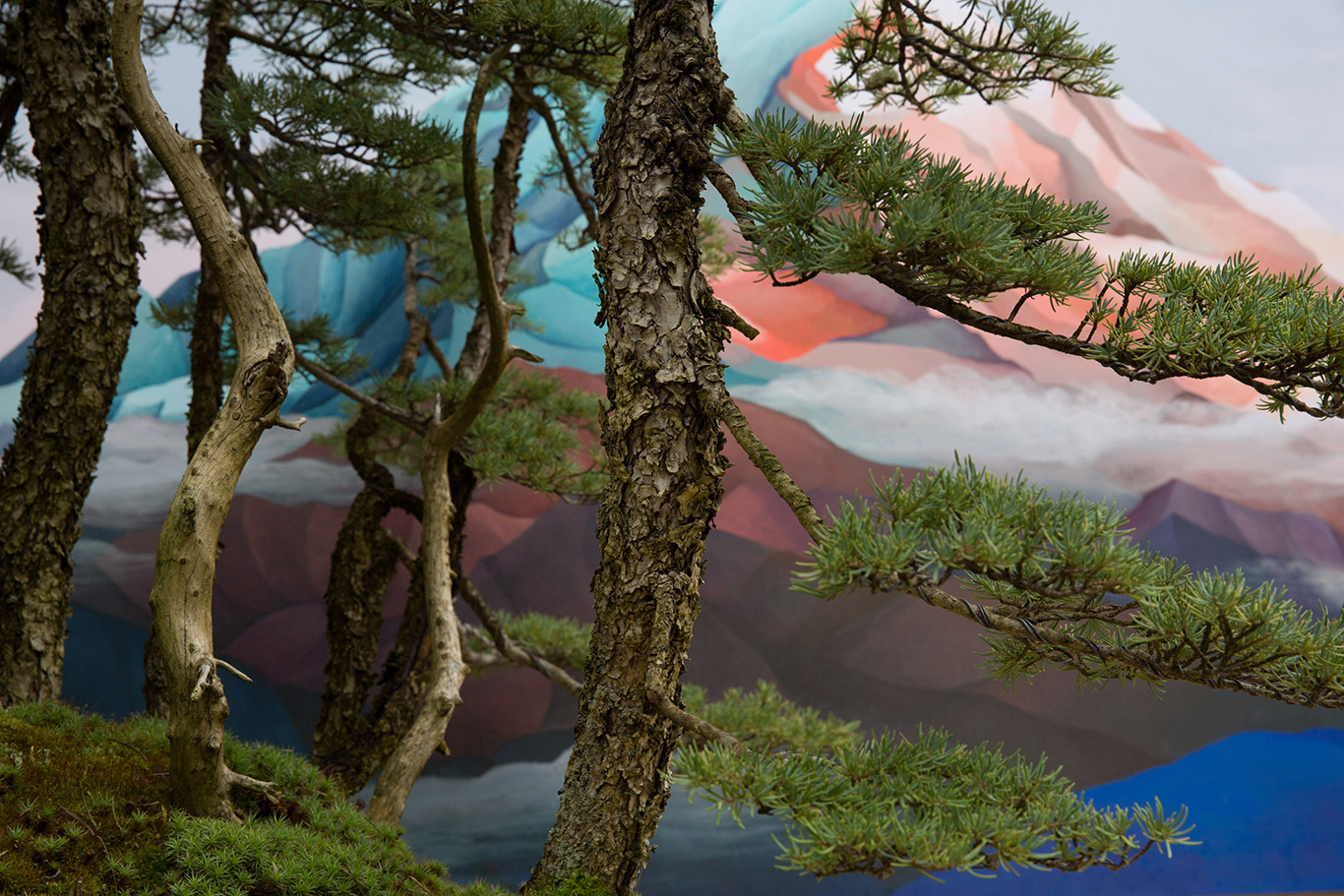 “I suddenly had the smell of the trees, the feeling, I felt like I so desperately want to go back there.”

The curatorial intention behind the exhibit was to hold a space for where you insert yourself, your story, and the natural spaces that have shaped you into display.

In Packard’s words; “The trees are shaped by environments— we know that as people we are shaped by the landscapes that we were growing up around or living in…bonsai is also being shaped by a person. There’s just sort of this amazing connection,” a captured synergy, if you will. 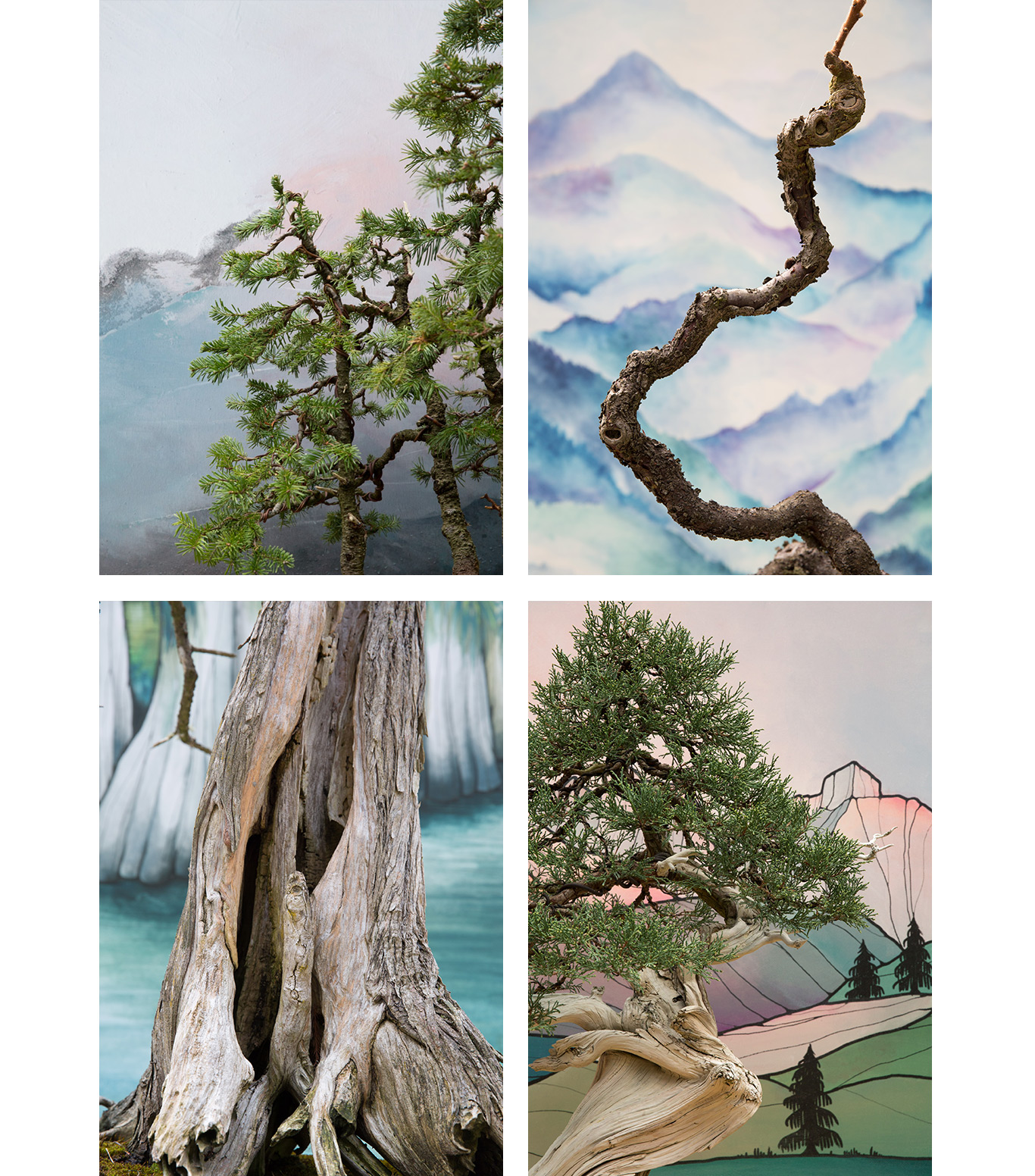 The Pacific Bonsai Museum is at the epicenter of what has been coined an ‘American Bonsai Movement,’ where bonsai practitioners are getting away from scrupulous tradition and using the trees as a vehicle for expressing their story with the landscape.

“Ultimately bonsai has to (shift),” Packard explained. “Like every art form, if I cannot connect with it, it doesn’t have much meaning for me. (PBM is) trying to give a place for the public to encounter bonsai in a way that they otherwise would never have been able to.”

PBM has the capacity to take a pulse on a rapidly shifting artform and canonize it with their institutional merit. As McCabe stated; “I believe that we are becoming the preeminent bonsai museum in the world. What the definition of that is, it is evolving as we create it.”

The Pacific Bonsai Museum is open to the public on an admission by donation basis 6 days a week. “Natives” was on display through October 8th, 2017. The Natives exhibit catalog can be purchased through PBM’s online store. To get involved with PBM, become a member or sign up to volunteer through their website.

*The Weyerhaeuser campus was designed by Skidmore, Owings, & Merrill and has won two AIA awards.

Written & designed by: Kendall Strautman
Photography by Arthur Hitchcock &/or sourced from the Pacific Bonsai Museum. 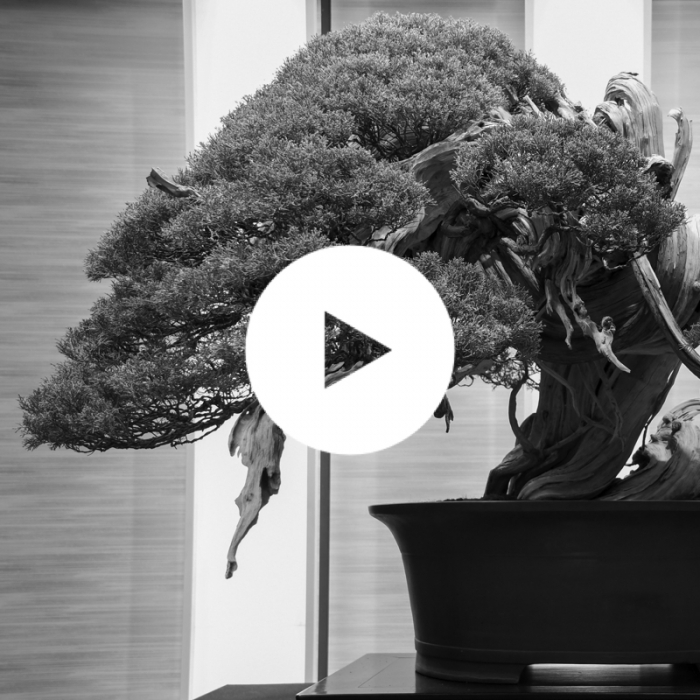 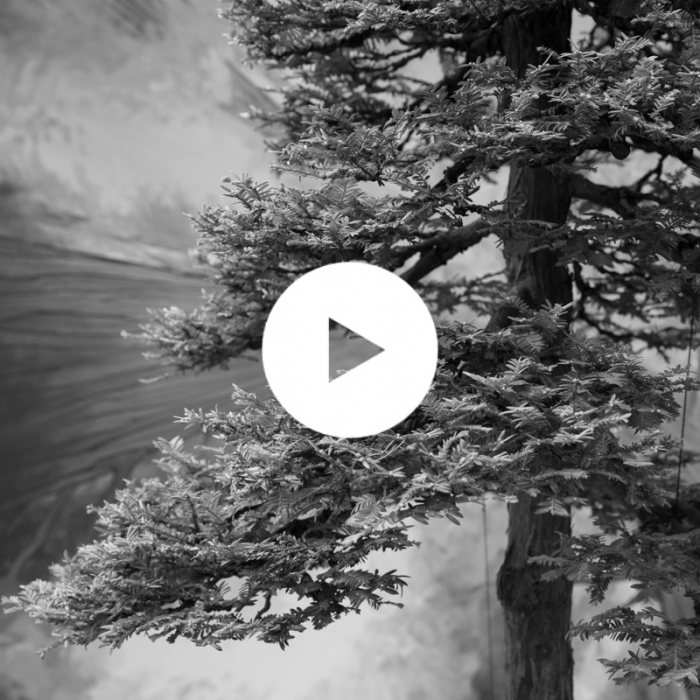