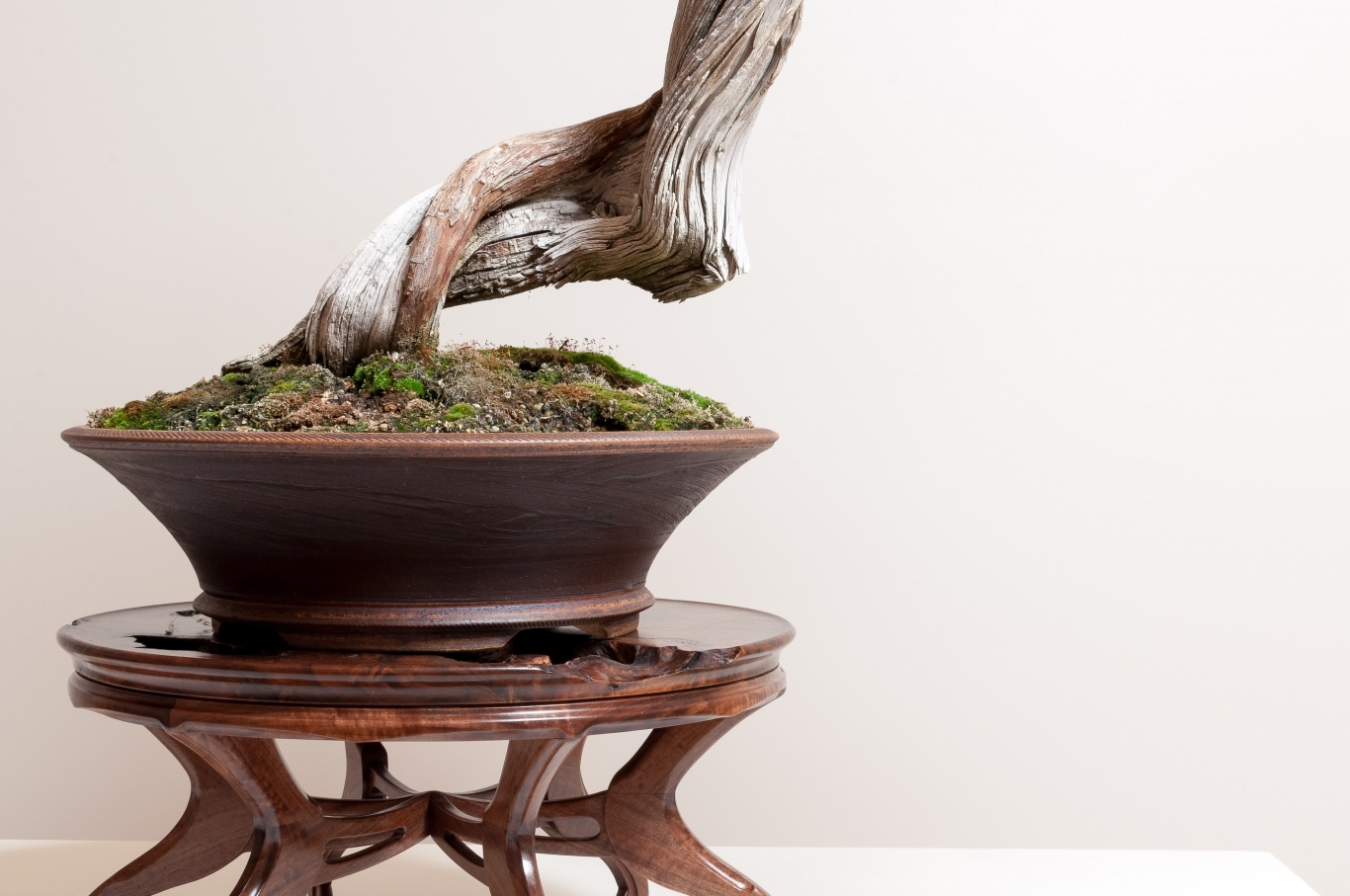 A gaggle of oblong baby blankets on wood stilts huddled in the corner of the Mirai workshop. A tall man in flannel and worn Levi’s hunched over them like a mother hen, inspecting his flock.

“Do you have any scissors?” he asked, grinning wide.

He reached up, trading his coffee cup for a rusty pair. Like a surgeon carefully removing plastic wrapping from his pieces, he unveiled a menagerie of marbled hardwoods—regal forest skeletons tamed by fluid hands. 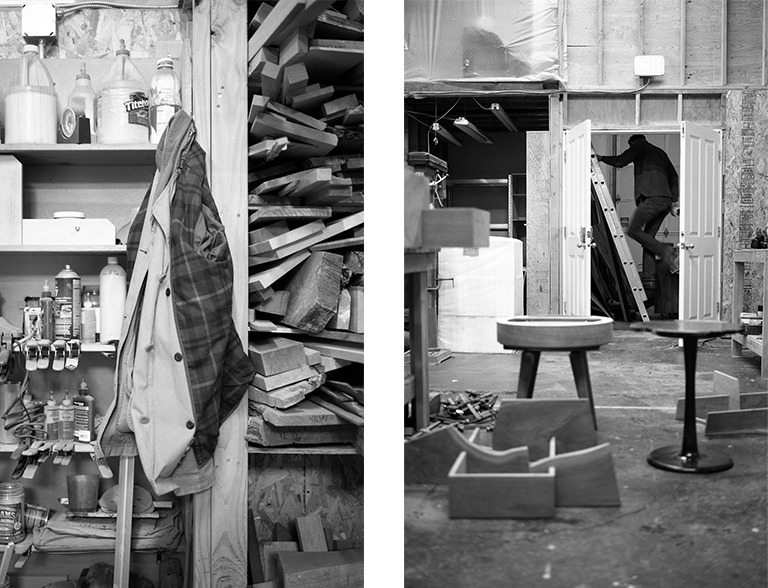 “I got this idea that I wanted to know every tree that existed, by leaf, by lumber, and by its bark.”

Austin Heitzman began woodworking in college. Although a drawing and painting major, Heitzman admitted that he, “never really made any paintings.”  He describes spending most of his time in the woodshop. “For me drawing and painting just kinda served as a catch-all. I didn’t think of it as discriminating medium to medium. Drawing and painting was art and art was just making shit. Why should it matter?”

Heitzman’s affinity for tinkering with wood got him flack from professors, but his obstinate creativity mushed onward. He started working on large scale installation sculptures made of, “plastic bits and wood and scraps and string…I saw it like the universe where everything is getting repurpose and recycled. I’d make lumps of stuff and break them apart and make something else out of them so there was kind of like no beginning or end to them.”

Heitzman’s curiosity with wood was insatiable; “I got this idea that I wanted to know every tree that existed, by leaf, by lumber, and by its bark. (I wanted to) just walk through a forest and I would know what (tree) it was and know what it looked like on the inside.” 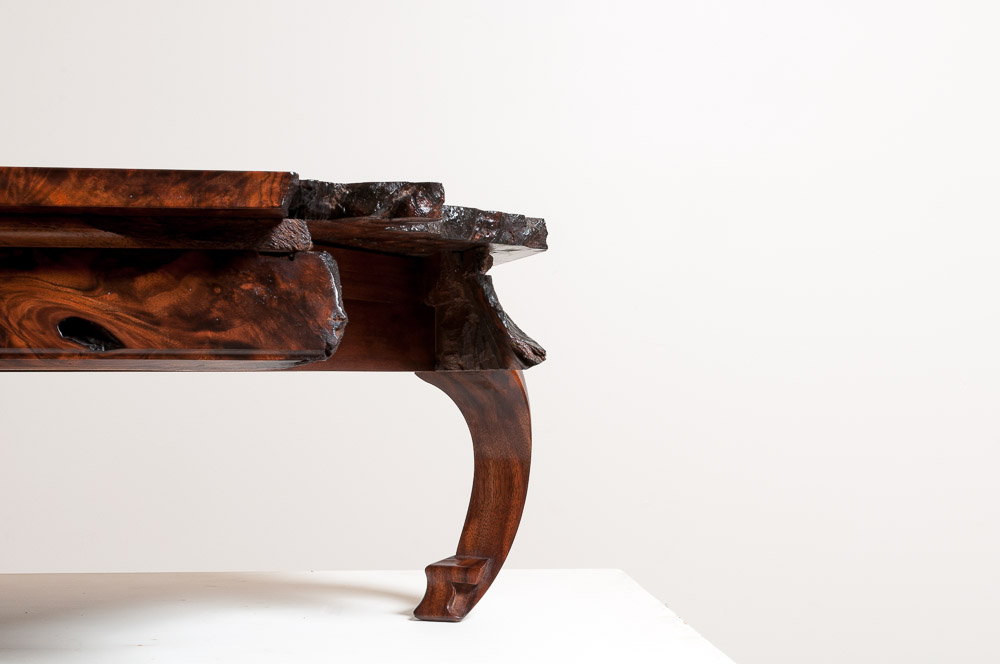 He began collecting ‘street trees’ by scouting Philadelphia’s abandoned parks; “I would go and cut burls off of downed trees, sliced em up and just kinda play with it and see what it was on the inside.”

Heitzman began using this material to experiment and upgrade his household furniture; “I’d pick a piece that I (didn’t) like, just some crappy dumpster dive piece of furniture and I’d remake it—exactly what I want.” He described going through every room in the house, “then friends wanted stuff, so I made stuff for friends.” In the process he realized, “maybe there’s something to this.”

Like Alice down the rabbit hole, Heitzman chased his curiosity and found his forte with furniture. Little did he know that honing this skillset was preparing him to become one of the best bonsai-stand craftsmen in the United States. So by happy accident, Austin Heitzman was drawn away from the East Coast to the Pacific Northwest, the epicenter of American Bonsai. 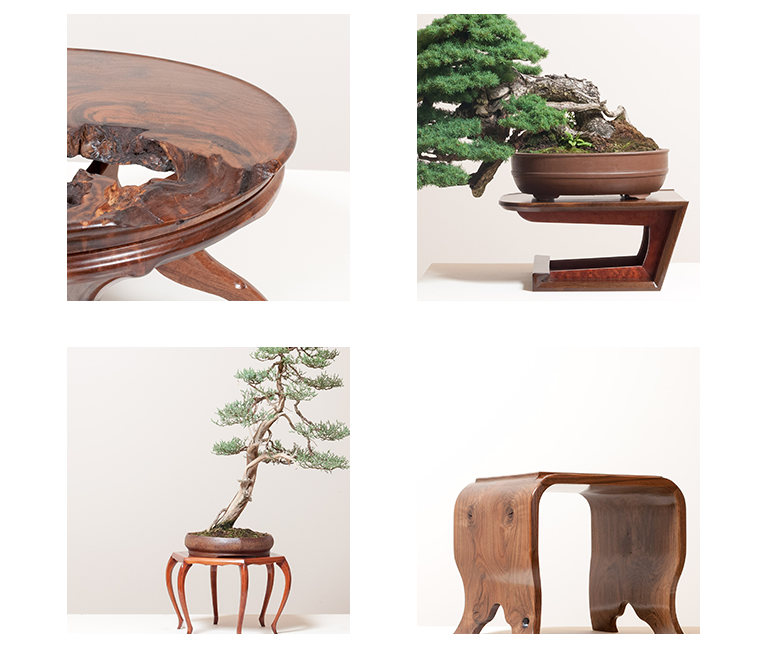 A bonsai aficionado himself, Heitzman knew there was a wood element to bonsai compositions—the stand. In the Japanese tradition, the stand is considered simply as a way to elevate the tree. But Heitzman had different ideas in mind, so he reached out to bonsai professionals in the area and was commissioned to craft some of his first stands.

This work got him a feature in Bonsai Focus, which landed in our very own Ryan Neil’s lap—Ryan raised his eyebrows and decided to reach out for a potential collaboration. Heitzman describes this as, “a died and gone to heaven (moment).” He had known of Ryan’s work via Mr. Kimura; “I was intimidated…like holy shit, I didn’t expect that to happen.”

In a customized commission for a very special Rocky Mountain Juniper, Ryan gave only this direction: “show me the very best thing you can make.” Heitzman did not disappoint, such catalyzed a pivotal moment for Mirai and for American Bonsai. 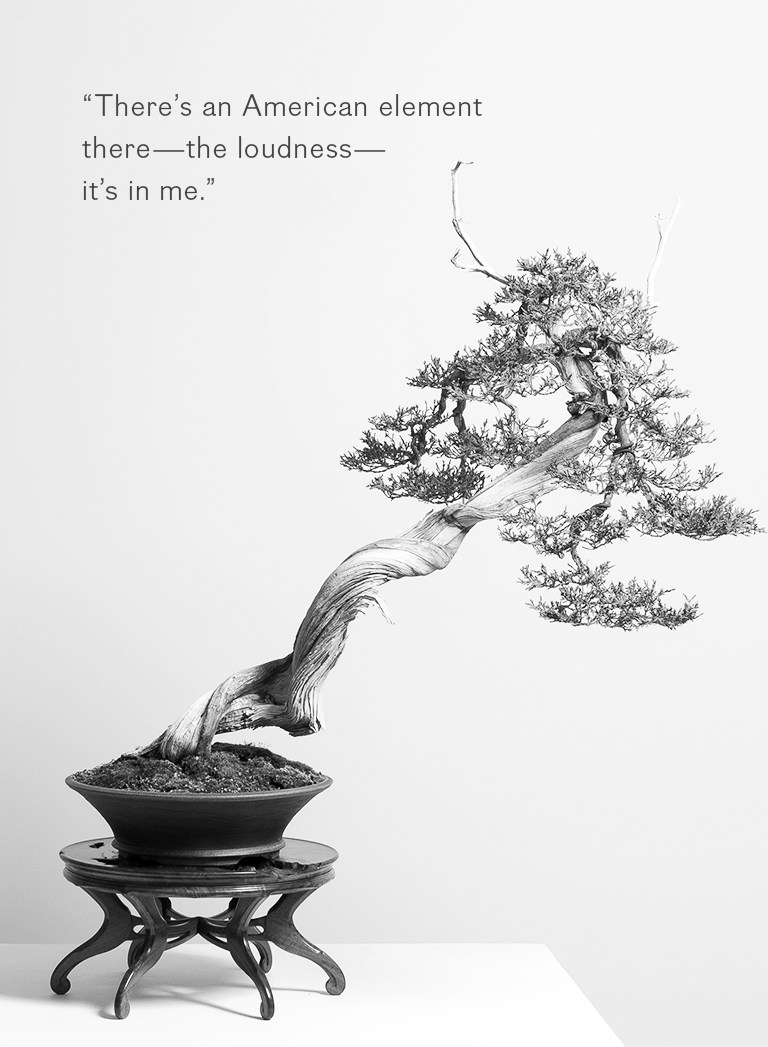 Heitzman’s stands are not ordinary. They are bold, emphasizing the wildness of the wood within a traditional, exquisitely engineered form. In Heitzman’s words, “I like to be able to work with what I’m given—what nature passes down. And make that part of the design, part of the decoration.” He talks about colonial furniture really influencing his aesthetic, as well as Japanese taste.

And yet, as he describes, “I don’t make stuff that’s quite on the Japanese level (of) quiet. There’s an American element there—the loudness—it’s in me. Maybe it’s the desire to be distinctive.”

This focus on individuality— within himself, with the trees he chooses, and with his custom work—is contrasted with his ideas of connectivity. He speaks of aesthetic, style, and artistic expression as interchangeable forms being recycled through human history in juxtaposing cultural lenses.

“You know, everything’s kind of connected…it feels like different cultures solve the same problems in different ways.” Heitzman describes his process as, “(taking) everything that you’ve been exposed to you in your whole life,” and molding it into one object.

It starts with a tree, the tagline for Heitzman’s business, shows in his work. The pieces tell a story. The material came from somewhere; it was alive, manipulated by nature and man to actualize this form. Heitzman’s products are more than just a surface to place things on. They establish a fundamental context and tone—for bonsai, for your living room, what-have-you. 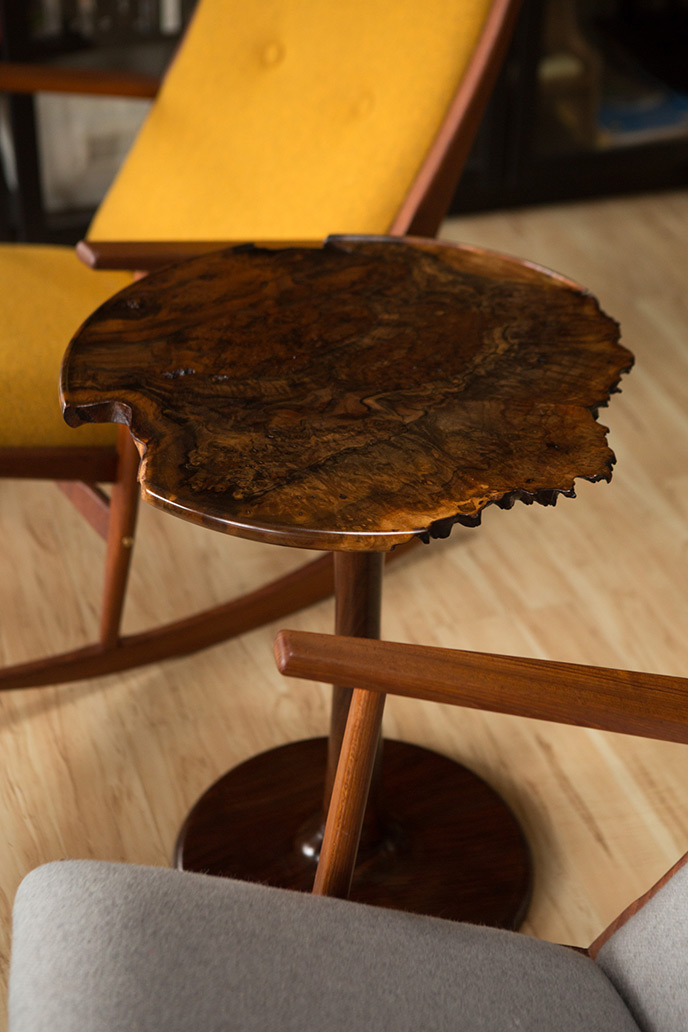 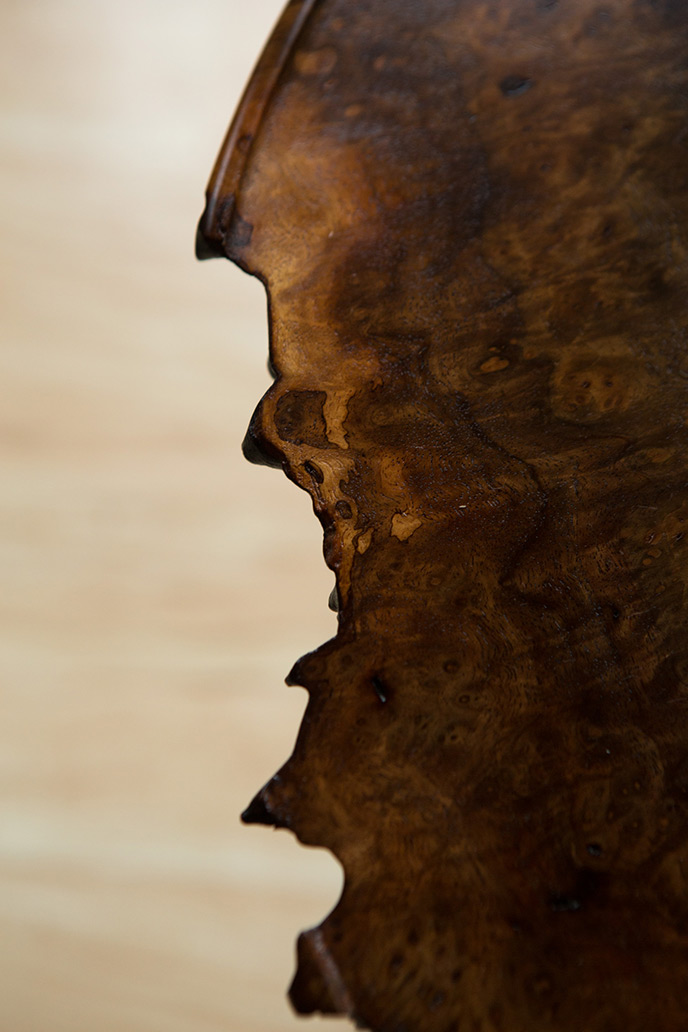 Hetizman’s work forces you to pause and recount Newton’s laws: cantilever stands, 3-legged stands, stands with legs bowing in. He is successful with producing the impossible because of his intimacy with the medium, ripened by exploration. The mechanical audacity in his pieces is tempered by organic sophistication—this graceful tension is what makes Heitzman a quintessential Mirai collaborator.

What is born out of working with this courageous and talented craftsman has revolutionized the way Mirai approaches stands. As opposed to thinking of a stand as simply a surface to elevate a tree, we see the stand as an opportunity to elevate the whole composition. With Mirai’s bonsai, every element—the stand, the pot, the tree—must coalesce to form a unified, dauntless design.

“The ambition is fun, as much as I hate it sometimes,” Heitzman chuckled, recounting previous projects with Mirai. “I feel like every time Ryan calls me up with some project, I’m like, ‘are you kidding me?’ (But then) I get to kind of reinvent the wheel every time.” 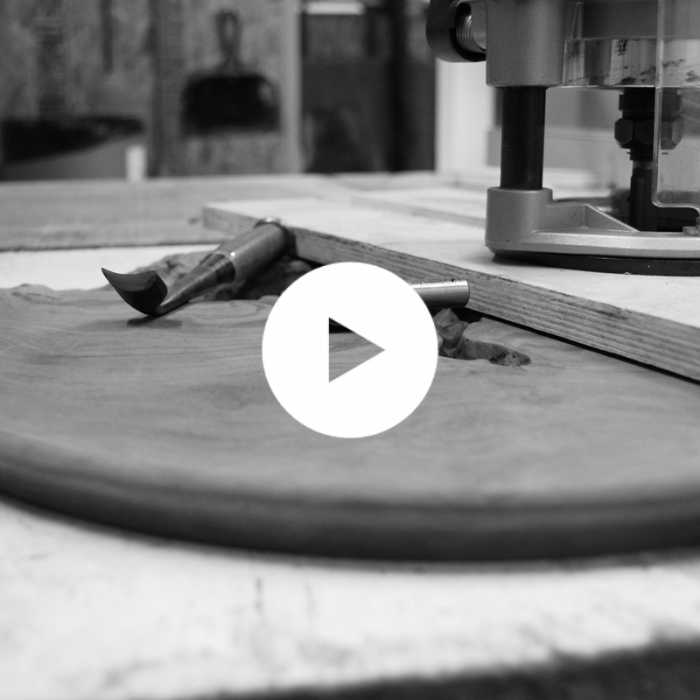 Art of the Stand 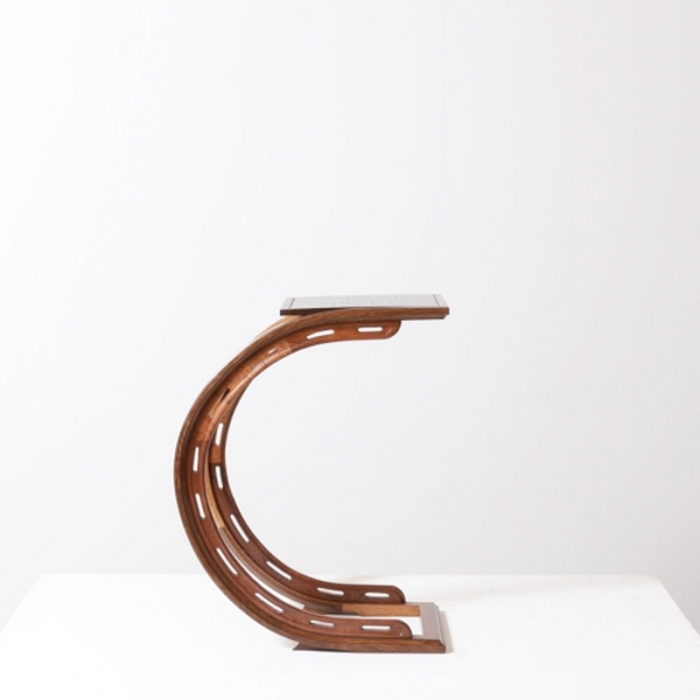