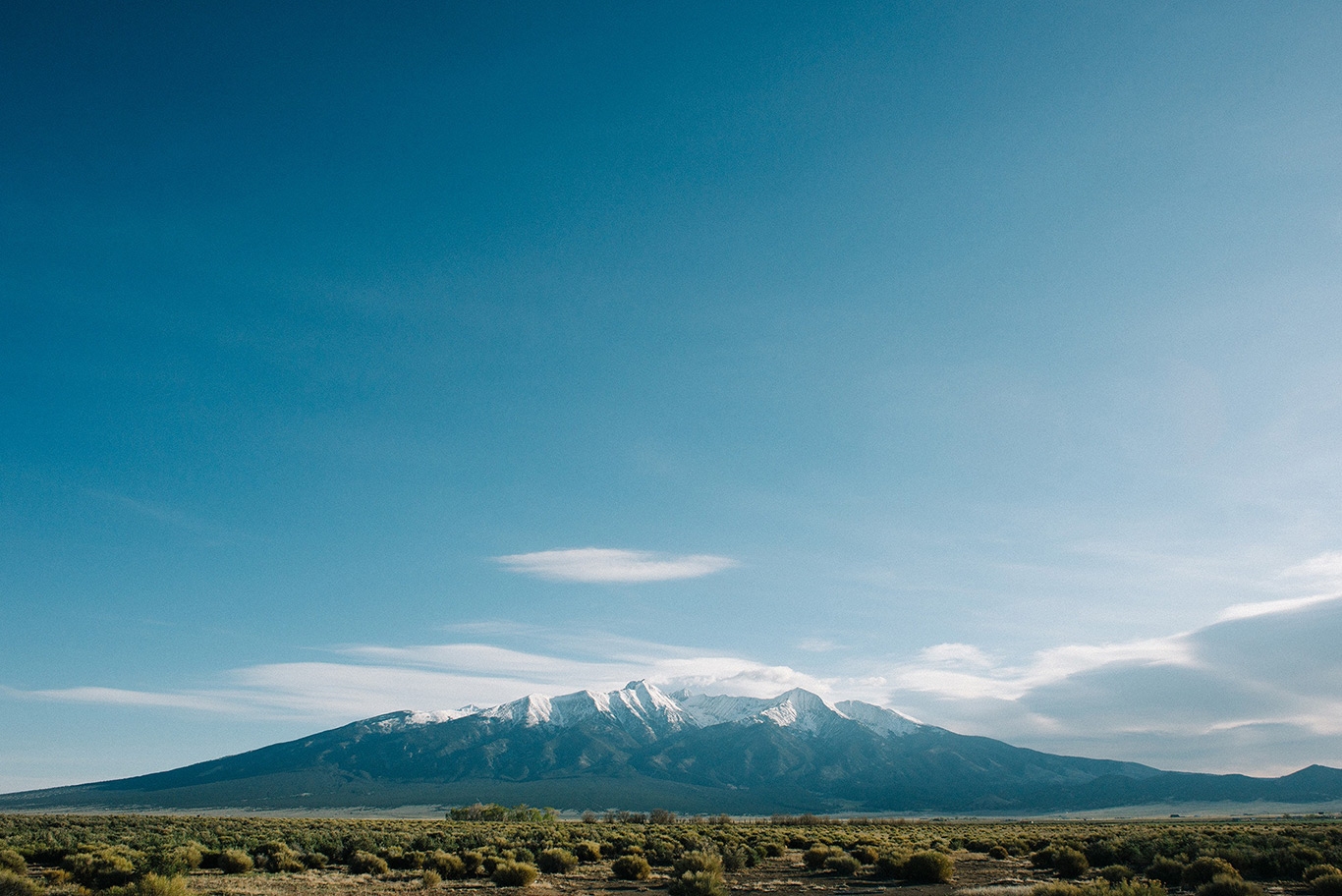 If you’ve been to the Rockies, you understand they demand respect. These mountains don’t accommodate your presence—and they aren’t meant to. The Rockies will work you, mold you, make you trudge higher than you’ve ever been before.

The Rockies are the gateway to the West, the hazing ground for pioneering innovation. They are the spinal column of North America, pumping lifeblood through the land with weather, water, and a sense of wild. 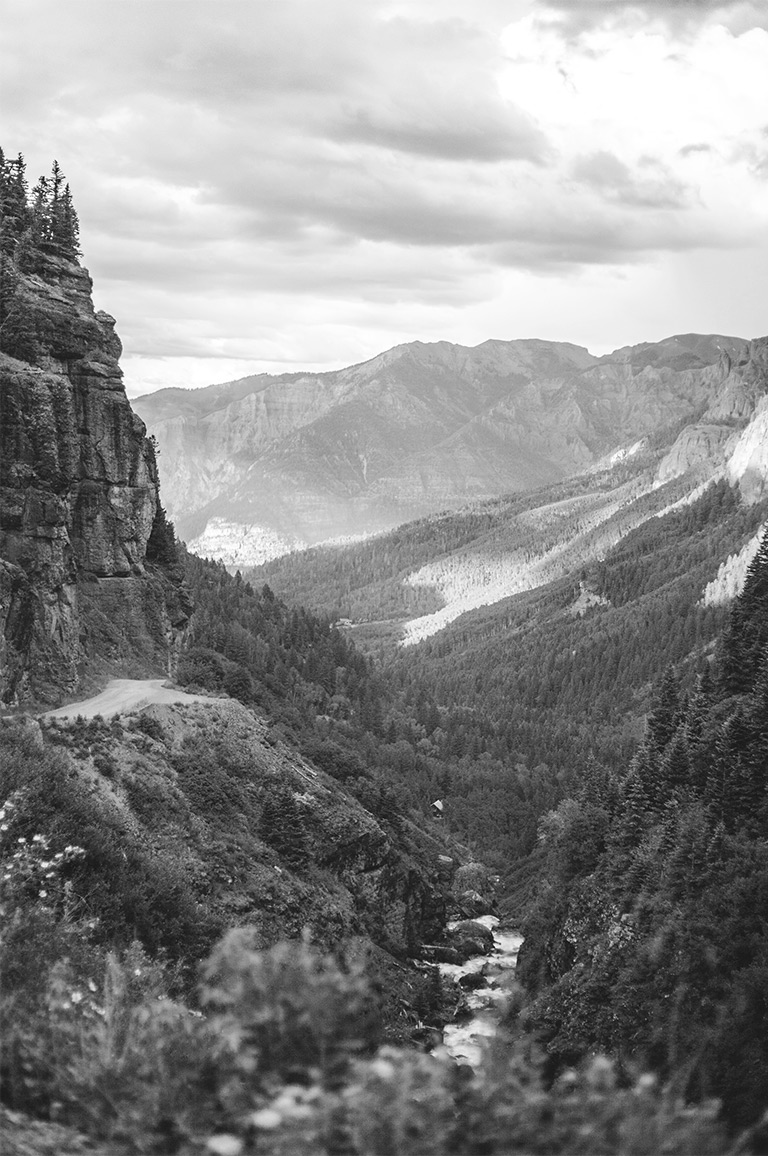 "They are the spinal column of North America, pumping lifebloodthrough the land with weather, water,and a sense of wild."

In the presence of these mountains, you are in awe, always looking up. You recognize your place as just another species in a vast ecosystem, at the will of the capricious peaks. When you wander in the bosom of 14ers, you can’t help but pay respect to the trees who have survived there. They wear the elements on their bark like battle scars. The altitude, the wind, the snow—these are the tools carving inspirational groundwork for American bonsai today.

Midway between the North Pole and the Equator, the Rockies surge across North America sweeping 3000 miles from British Columbia to New Mexico, at a width of up to 300 miles. Splitting the Great Plains from the Great Basin, the Rockies are the longest mountain range in the United States.* 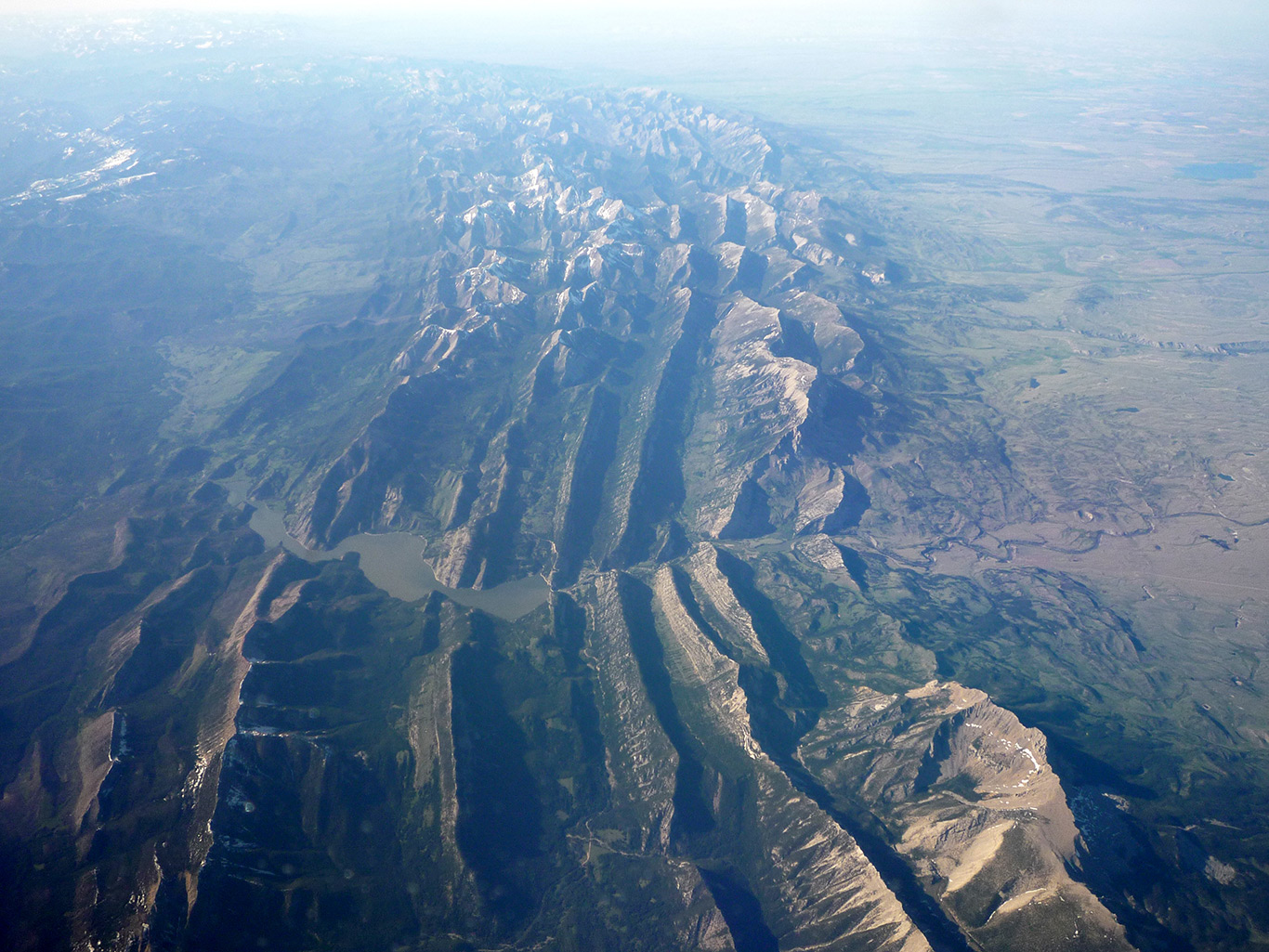 Through several glaciations over millennia, a landscape of deep valleys, pocketed moraines, and towering summits began to take shape. Along the tip of the highest elevations run the continental divide, a line dictating the flow of water across North America to the Pacific, Arctic, or Atlantic Oceans.*** 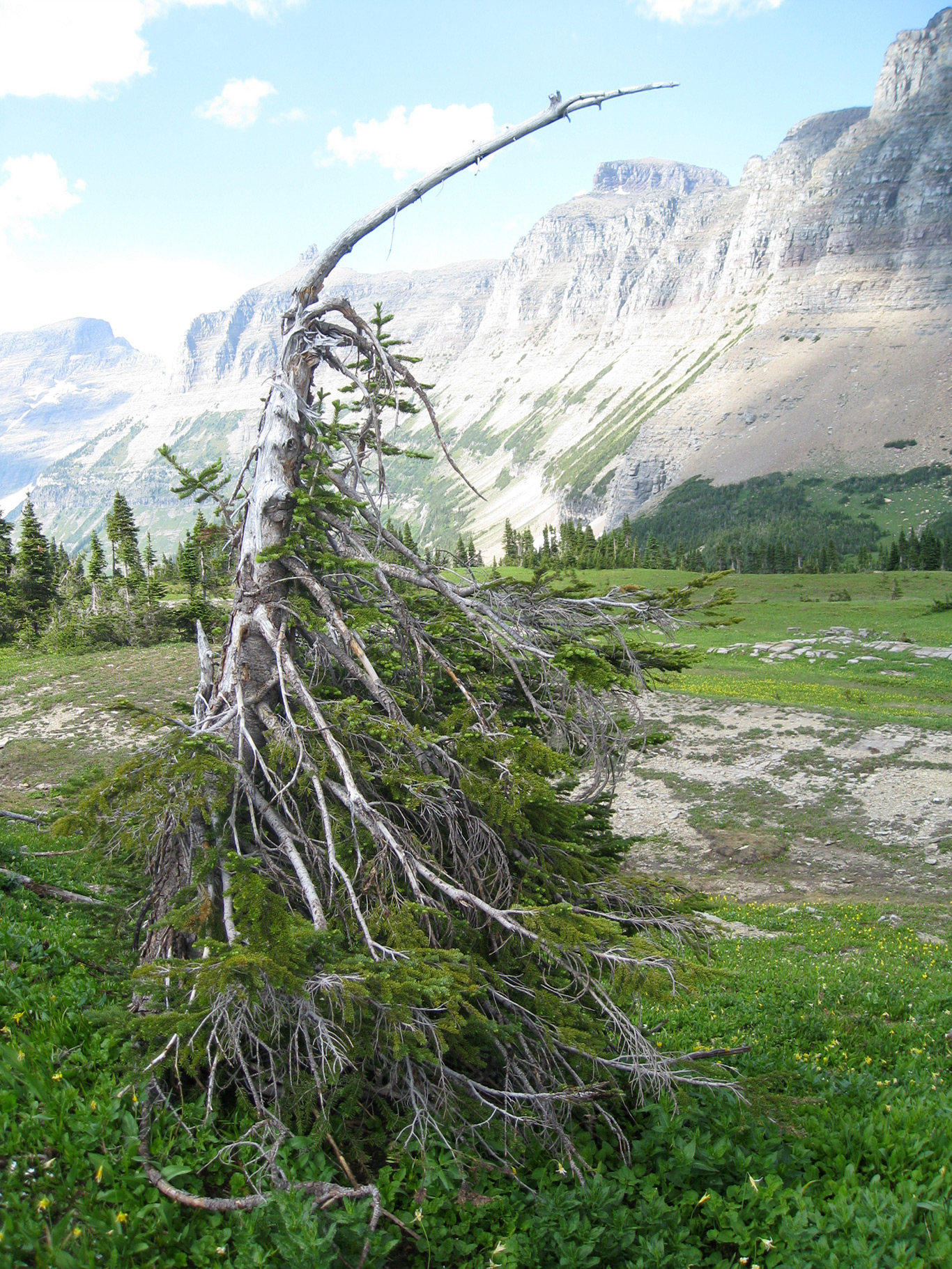 "The roughhewn mysticism inRocky Mountain trees imbuesthem with a personality, a storywaiting to be told."

Most of the water supply for the Western United States comes from rivers originating in the Rockies. Jet streams from the Polar, Pacific, and Gulf slam into the Rockies from all angles, creating complex weather systems and extreme precipitation patterns.

The winters are rough and long, with freezing temperatures seen year round in high-alpine elevations. Growing season is very short, punctuated by unexpected frosts and violent afternoon thunderstorms. The Northern Rockies receive almost 3x the amount of precipitation as the Southern regions. These climate fluctuations, although severe, express immense ecological diversity. **** 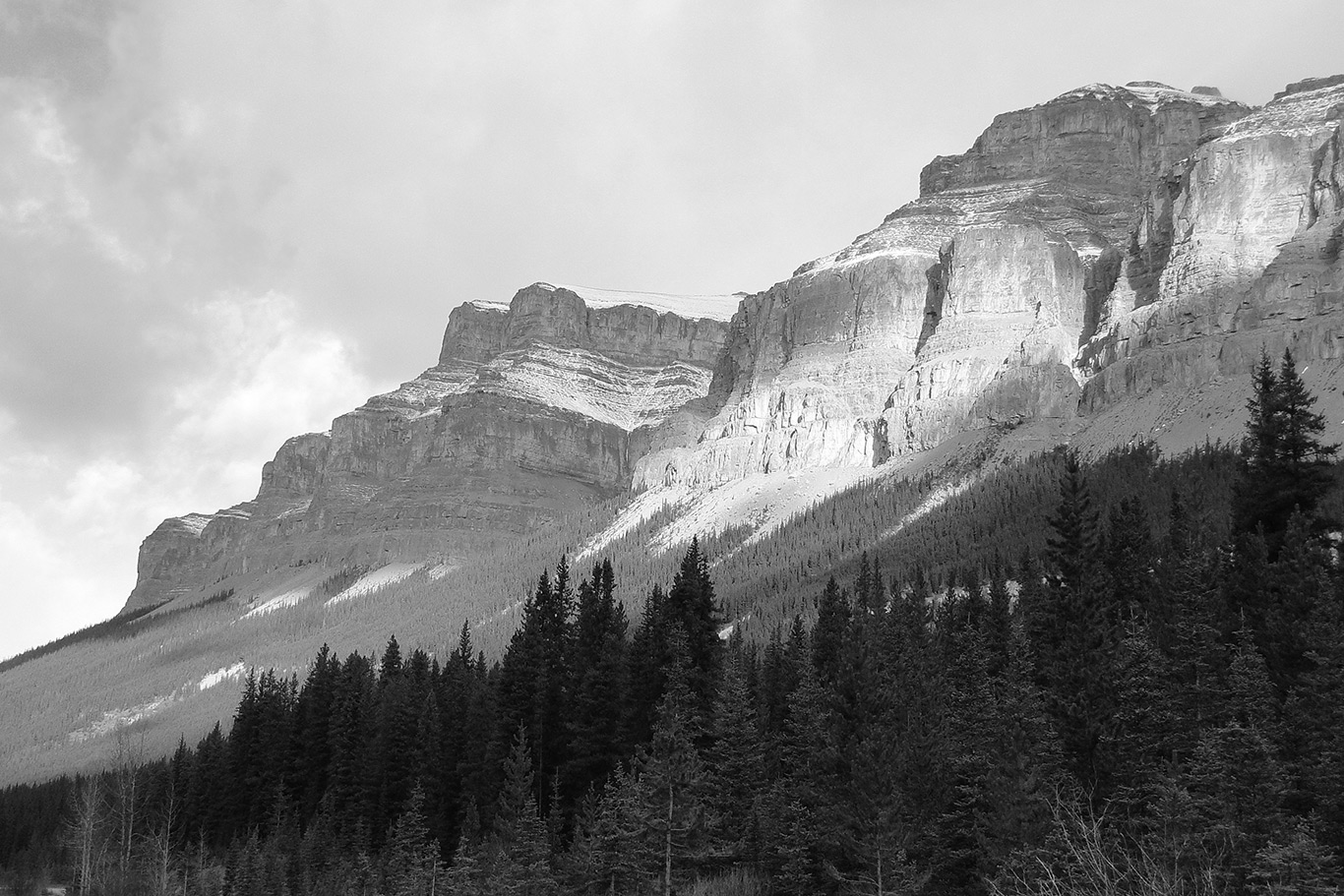 From the flat, rolling hills of the Great Plains, the Rocky Mountains rocket upwards to 14,000 feet and beyond, occupying three distinct ecosystems at varying elevations: montane, subalpine, and alpine.***

The middle-elevation montane region boasts the emblematic Ponderosa pine, Douglas fir, and quaking aspens. In the rain-shadowed valleys of the southern Rockies, Piñon pines and junipers—Utah and Rocky Mountain—fight for basic resources in a semi-arid desert.

The subalpine landscape is where humans like to play; this elevation hosts most major ski resorts and adventure tourist attractions. The mountains here are blanketed in varied conifers: western hemlock, Lodgepole pine, subalpine fir, Colorado spruce, and Engelmann spruce.** 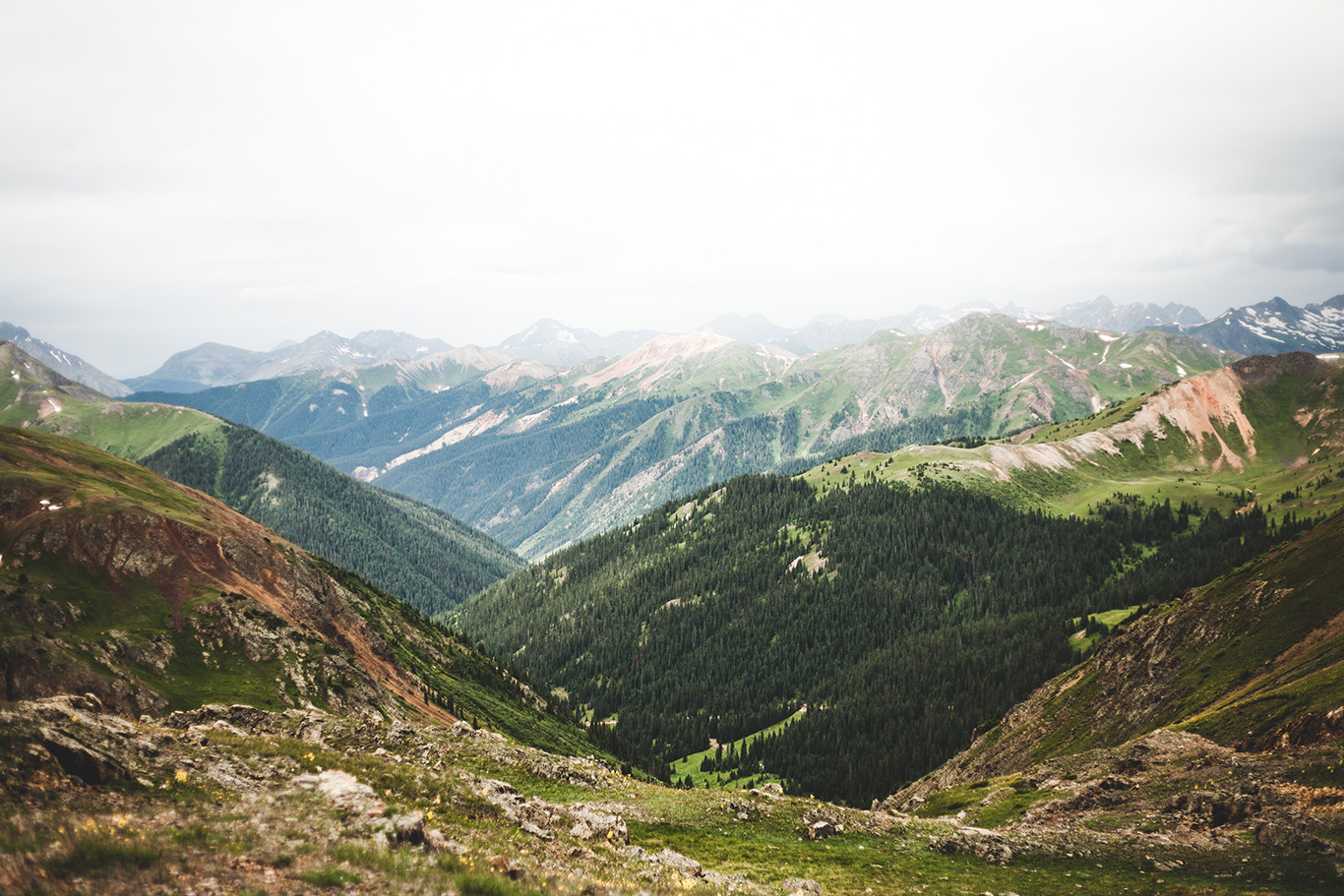 Ascending in elevation, the transition into alpine tundra is stark—only minimal ground vegetation grows here. The ecological strip between subalpine and alpine is a line where basic life resources begin lacking, oxygen being the main concern. We know this as ‘treeline.’

Along this line, stunted trees grow where they find pockets of safety from the wind, mostly in big rocks—this phenomenon is called Krummholz. Treeline is a sweet spot for bonsai material because nature renders harsh enough conditions to keep trees small despite decades or centuries of growth. 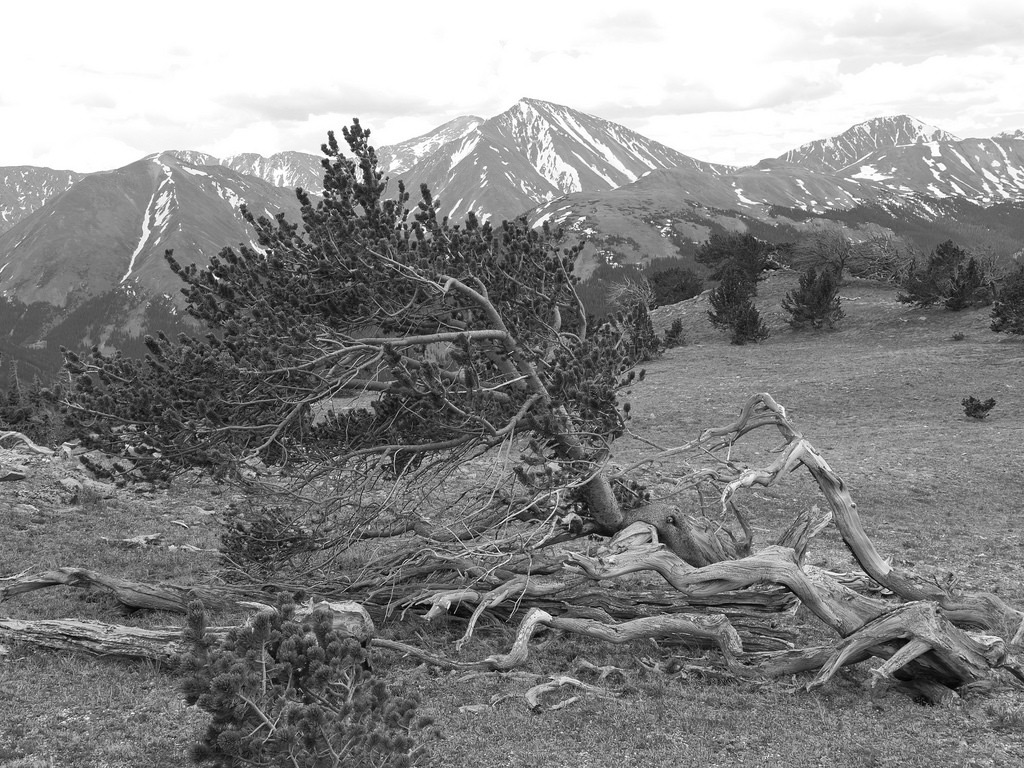 Rock and yamadori go hand-in-hand. Granite slabs in the Rockies are a breeding ground for stunted trees. In the stone, there are deep pockets where soil accumulates, seeds germinate, and trees grow. The stone acts as a natural container, dwarfing the tree. Combined with drought, heat, wind, snow, and altitude, these trees take on an ancient ruggedness. 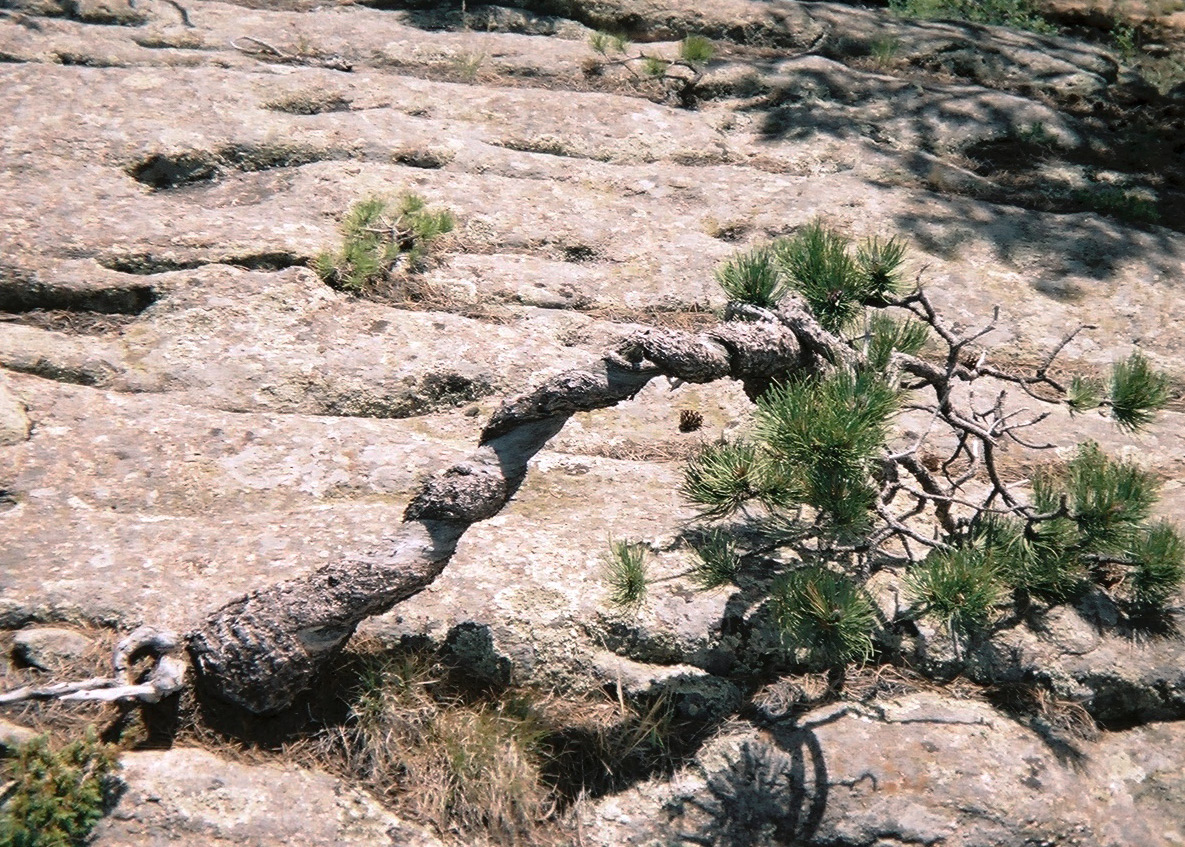 The roughhewn mysticism in Rocky Mountain trees imbues them with a personality, a story waiting to be told. Some of the most iconic trees we have crafted at Mirai have been with species from the Rockies; we are called to exalt the severe wilderness from which they came.

In bonsai, these trees highlight that tension between Japanese-inspired tradition and creating audacious trees that reflect an American ethos. Designing these trees is about a big, bold, rugged embodiment of American landscapes and culture. 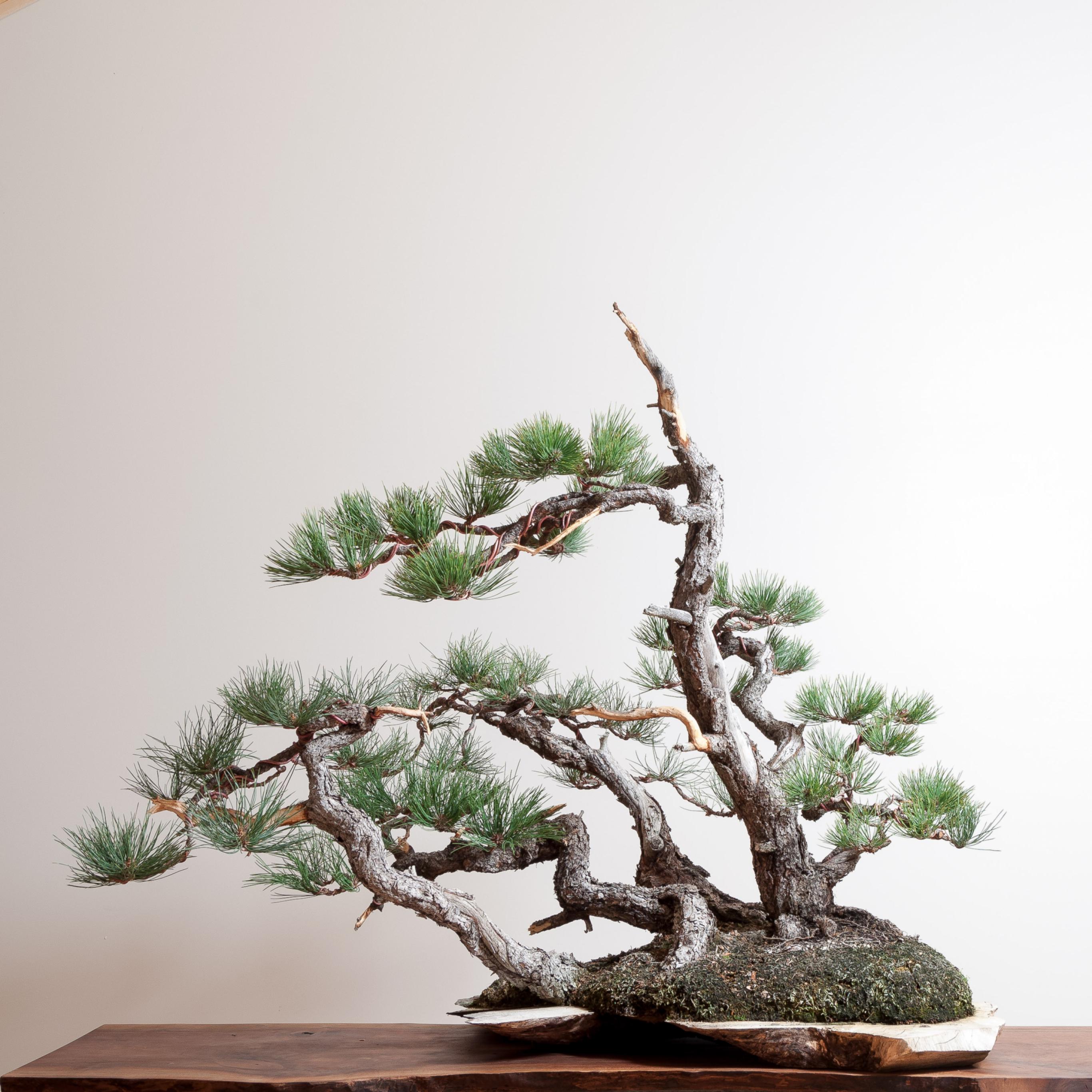 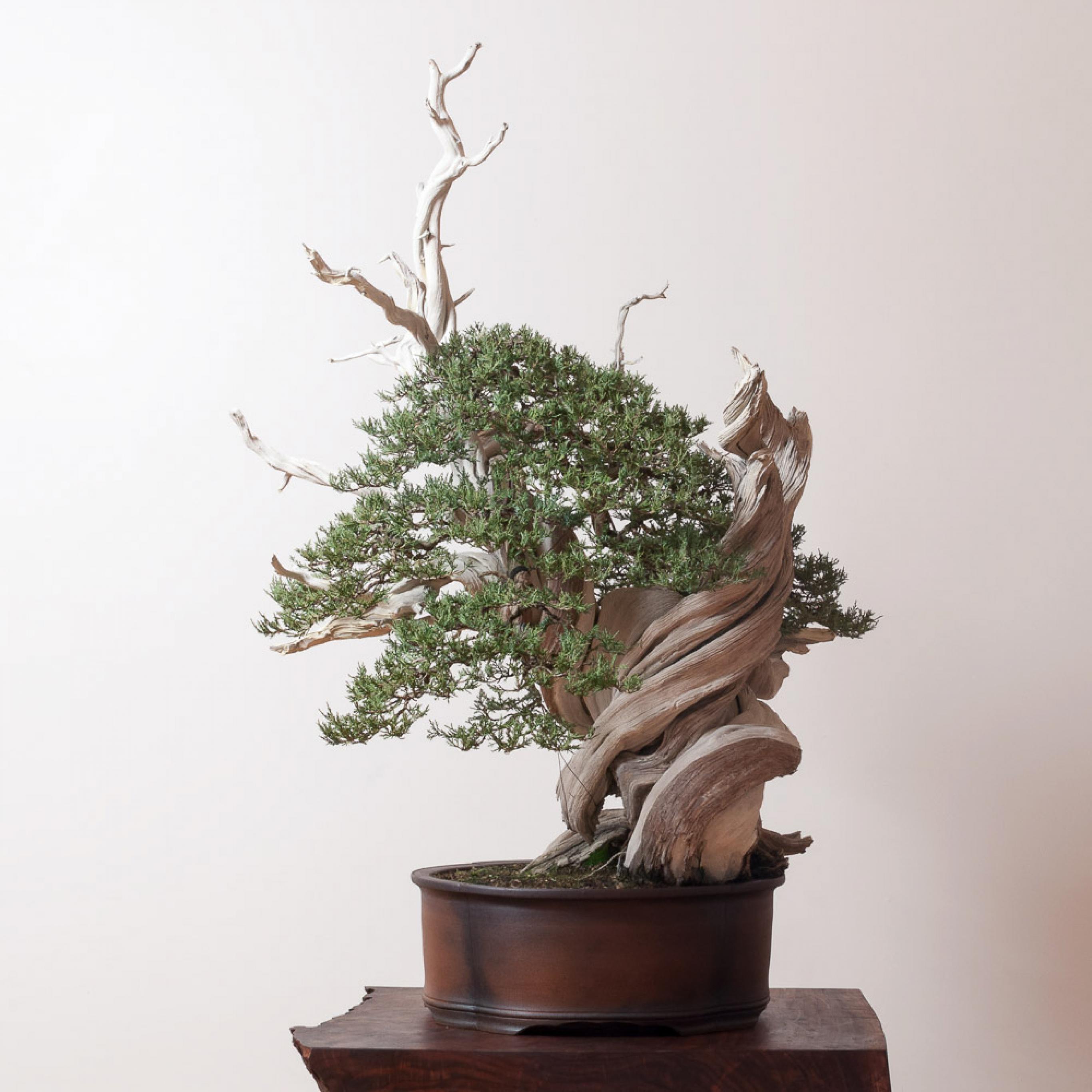 "Designing these trees is about abig, bold, rugged embodiment ofAmerican landscapes and culture."

American bonsai began with Rocky Mountain trees—collecting native North American species for bonsai launched in the Rockies in the 60s & 70s and is still a horticultural frontier to be explored.

Pioneering with Rocky Mountain species requires a technical finesse and courageous biological awareness. You have to work the trees without an established canon—soil, water, fertilizer, technique, design—this knowledge remains elusive for even the most skilled practitioner. Making big moves with Rocky Mountain trees defines the crusaders from the dabblers. 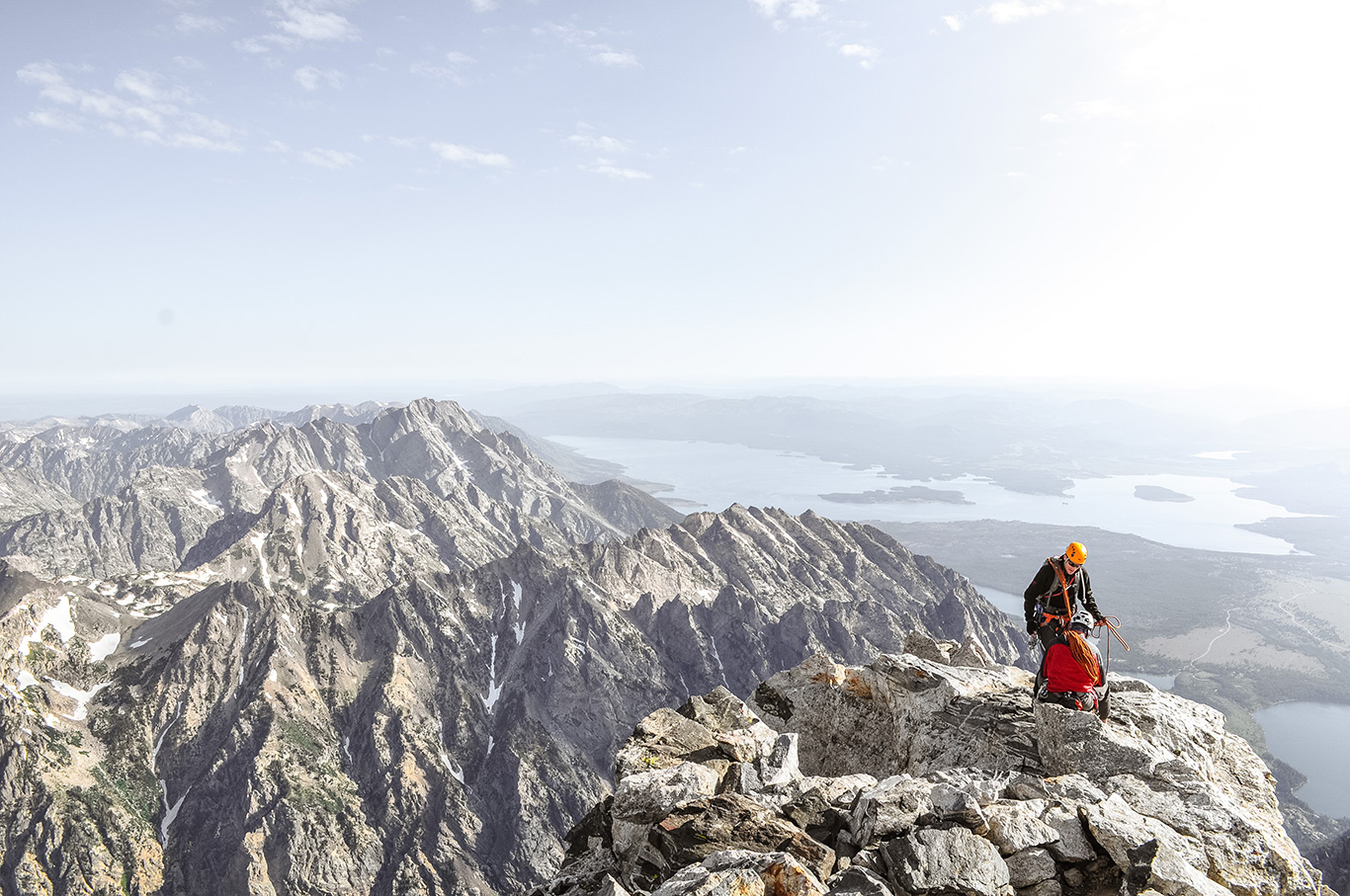 Just like climbers who look at 14ers, salivating at the chance to climb, those of you who wish to define yourself in bonsai are called to ante-up with Rocky Mountain trees. Once you commit, there’s no backing down.

For us at Mirai, these trees are an alluring challenge. They are grizzly brutes. They require a whole new approach. But our willingness to adapt, to persevere—out of ego, or greed, or an affinity for suffering—is what makes our process perfectly American. We take material that people think is too crude and we give it the chance to shine, foibles and all.

Our quest to create American bonsai that is representative of our landscape and culture is born out of the Rocky Mountains. We began at the base of prodigious peaks, head lifted to the sky. We’ve learned things, we’ve taken immeasurable risk, and we’ve wrestled with failure. But in that process we’ve tasted the edge between chaos and compliance—and we’ve kept climbing. 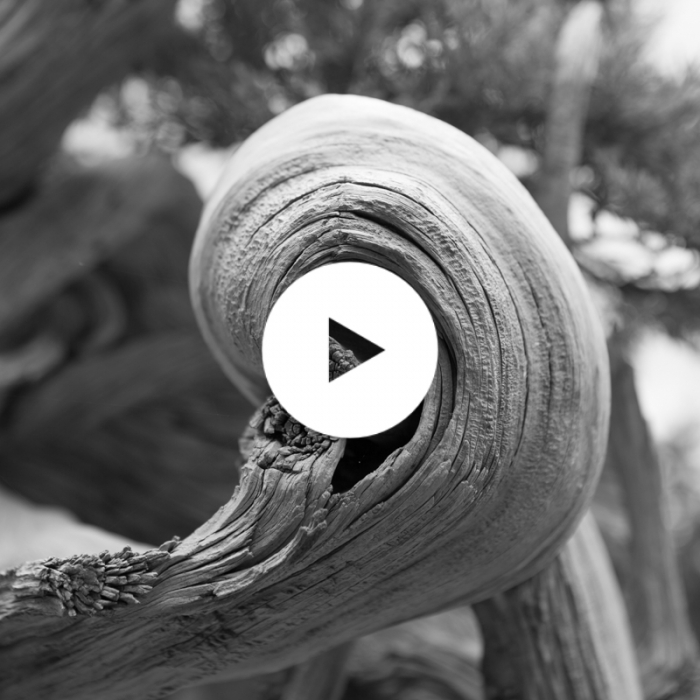 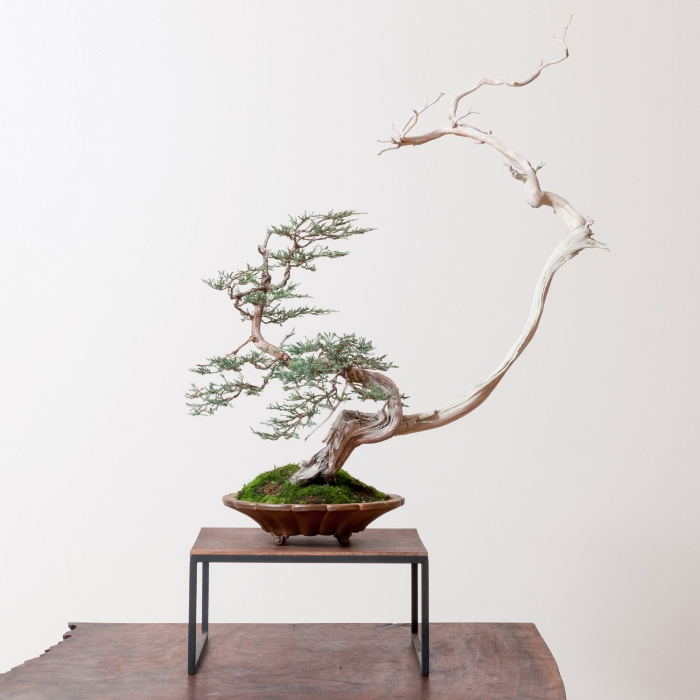 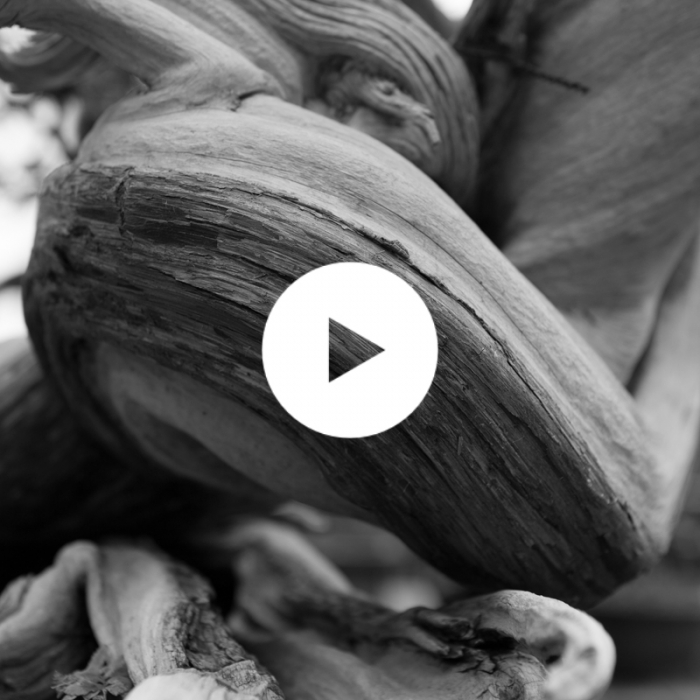