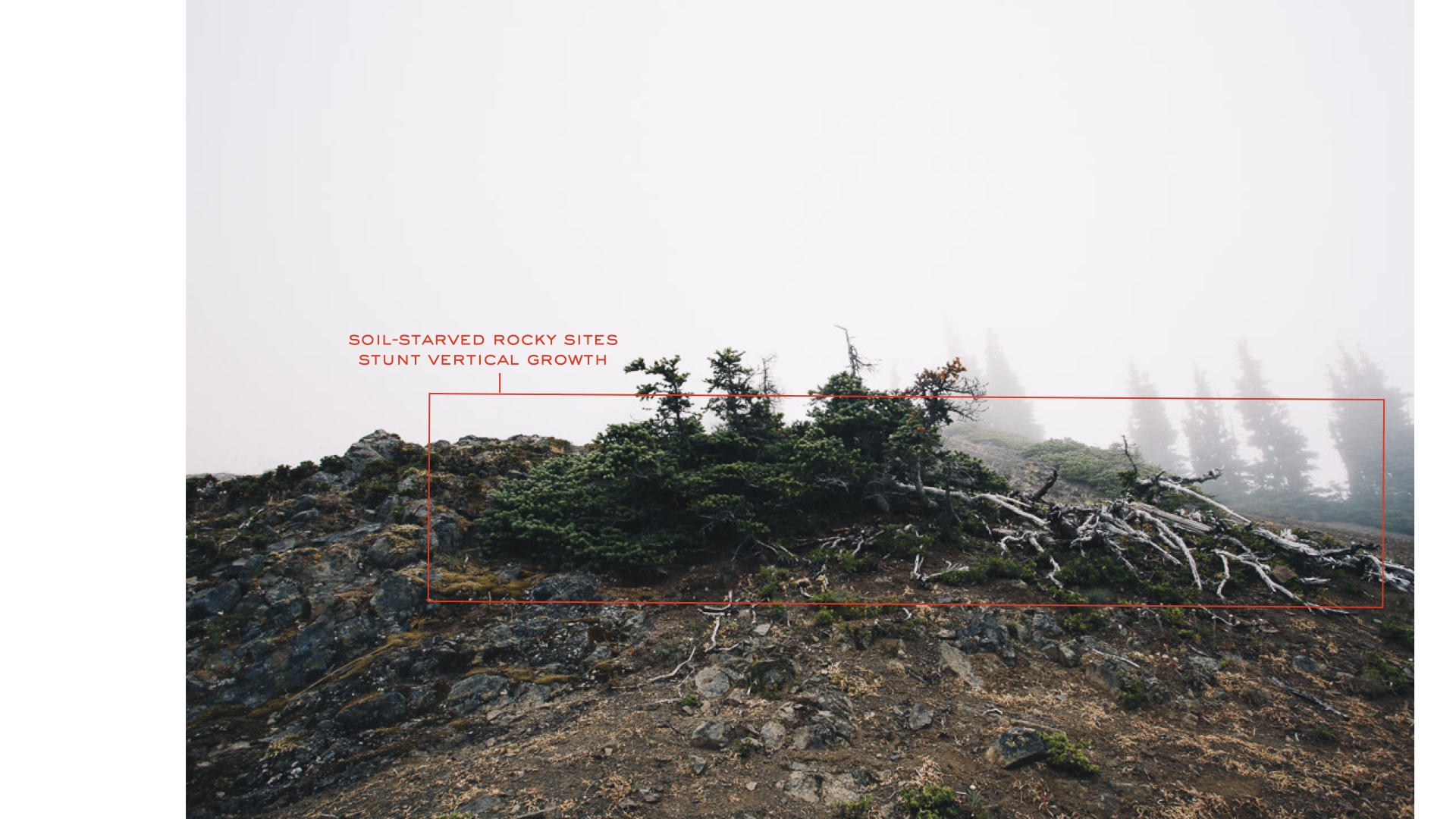 An examination of the native environment to understand a tree's aesthetic.

The subalpine forest of the Olympic peninsula in Washington is defined by the contrast of its exposure, and influx of moisture from the Pacific air mass meeting land at 6000 feet above sea level.

Prominent tree species include the subalpine fir, mountain hemlock and douglas-fir, with a host of delicate flora populating the understory of this lush forest that emerges from harsh winter conditions.

While subalpine firs can grow up to 150 feet tall and live up to 250 years, it is the exposure, lack of water, and subsequent desiccation of trees that illustrates the aesthetic contrast of this environment study. 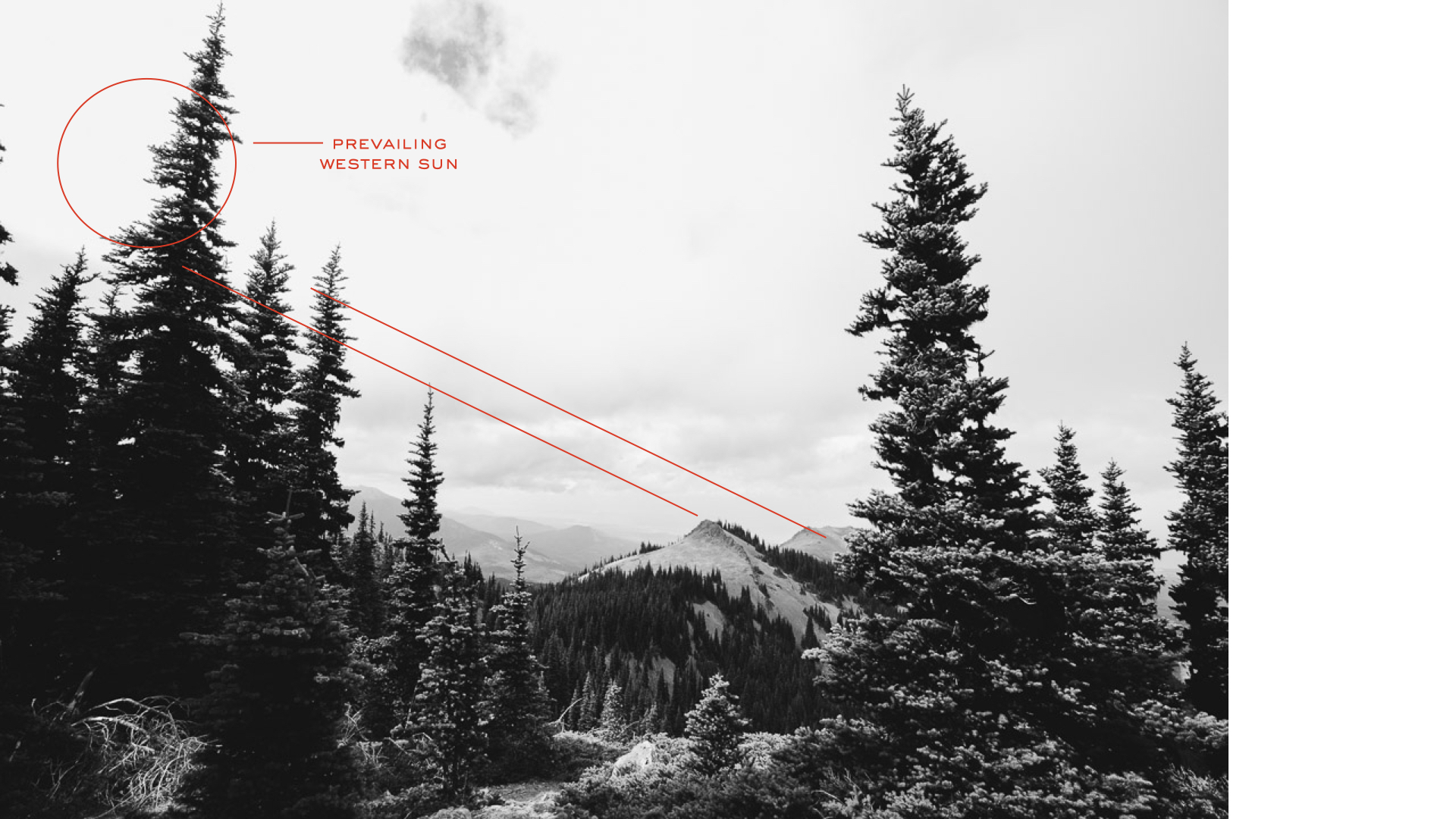 At 5000-6000 feet and north, the drying impact of the alpine sun creates inhospitable areas where trees simply cannot survive the duality of moisture, and the sun's intensity in constant flux.

The alpine region shown here has a continual amount of moisture, so any limitation comes from exposure. This area’s west-facing orientation and lack of soil prevents that abundant moisture from reaching the trees, leaving the land barren. 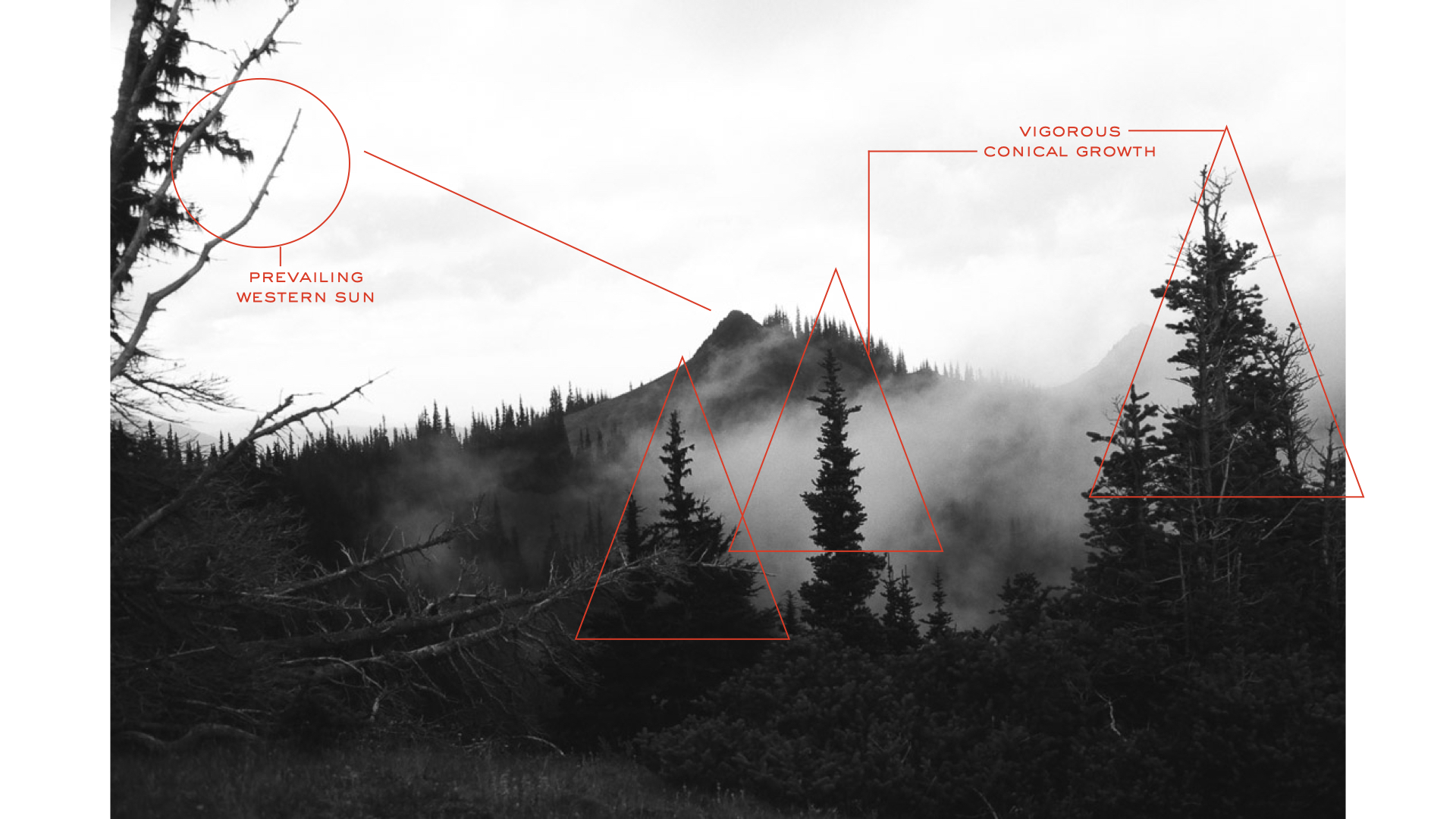 Narrow, upright, triangular growth seems to be the pivotal feature of the subalpine fir's capacity to thrive given the low angle of sun and harsh, heavy winter conditions. The contrast of the conical trees in the foreground against the distant landscape shows both lush tree growth, and a firm boundary where exposure makes the land inhospitable to the life of a tree. 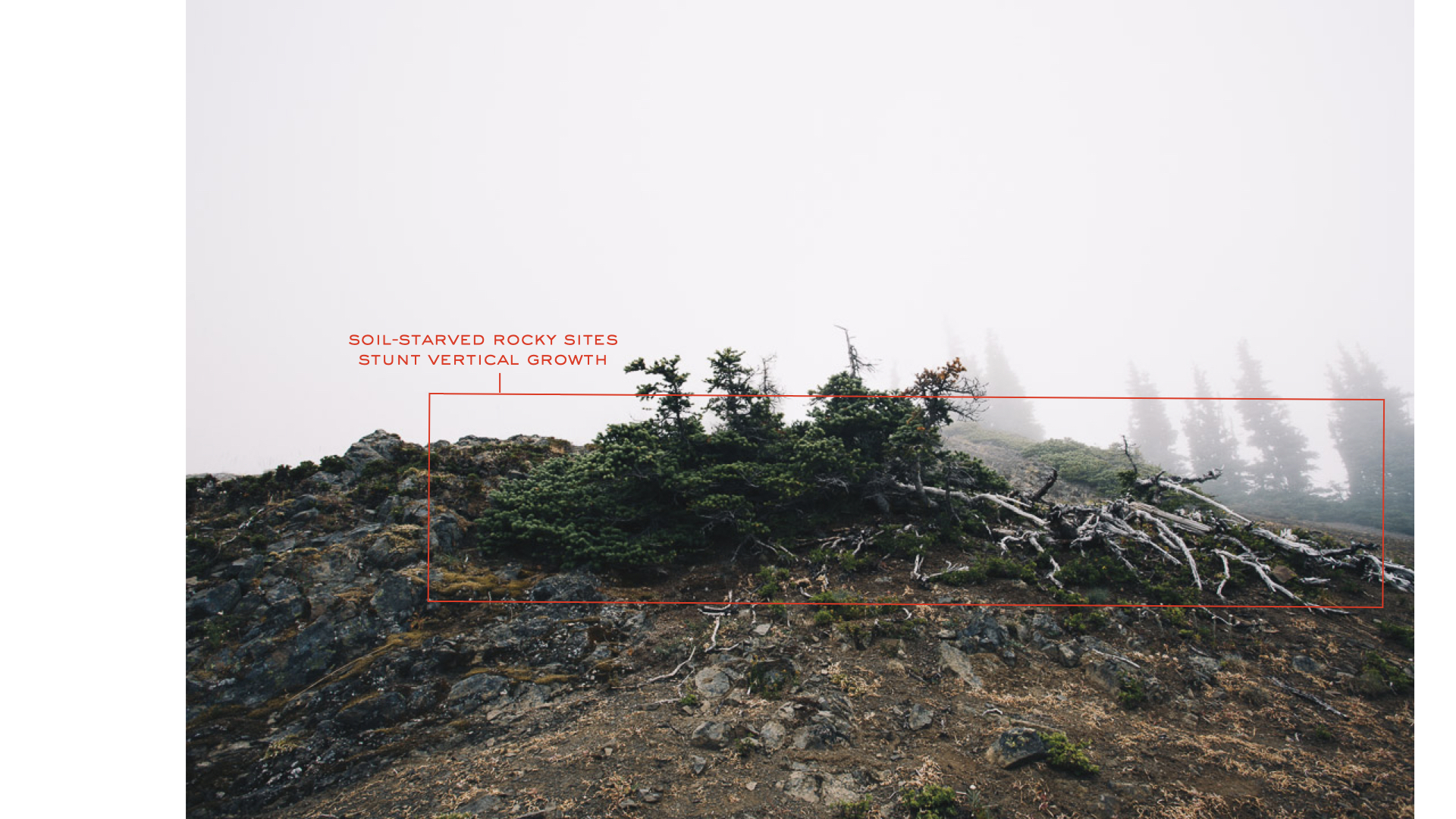 In these rocky hillsides, we noticed a different growth pattern from the spire-like trees nearby. In these conditions, the subalpine fir forms a skirt–a stunted, sprawling form due to lack of moisture or soil to be able to hydrate a vertical tree. The deadwood in this grove shows where the skirt has perished over the course of time. 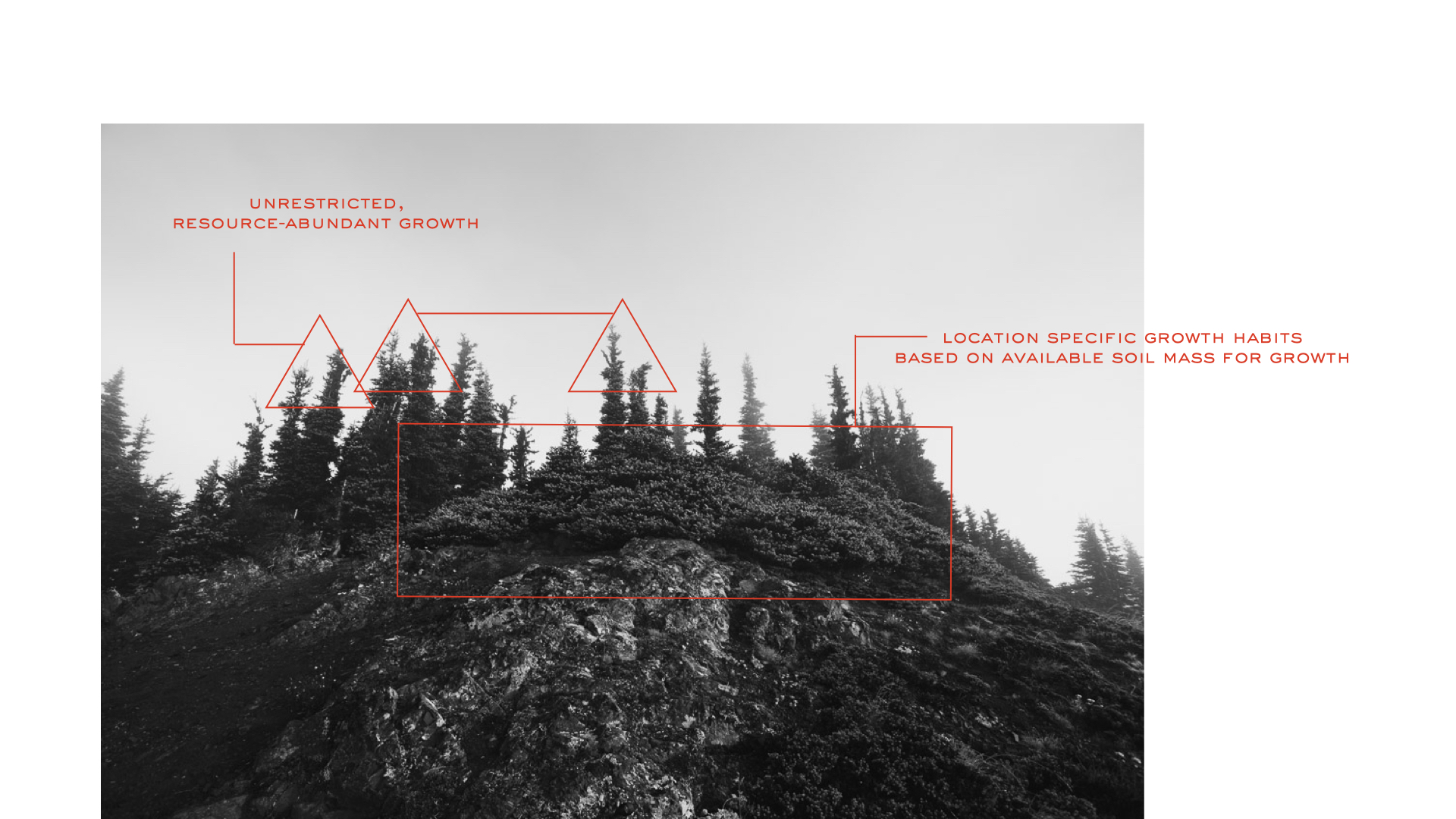 Zooming out from the skirt, we see abundant soil accumulation on the top of the hill. This area of soil has not been eroded or washed away, and supports thriving conical forms. The tree’s growth patterns are spaced not for light, but for the pockets of moisture available to their roots. 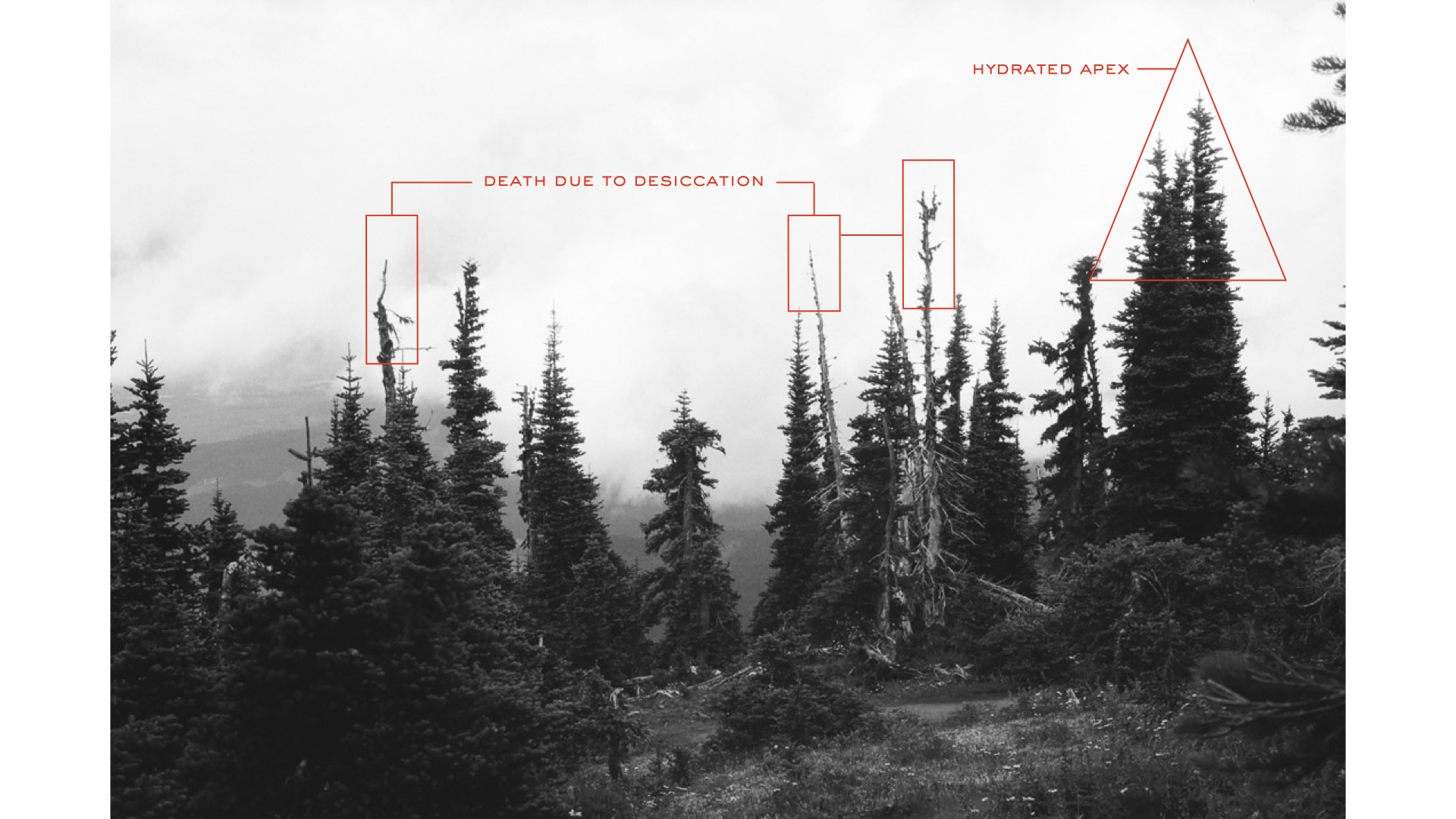 Though heavy winds abound, the subalpine fir maintains almost a ramrod straight, perpendicular verticality–and they die from the top down. As the apex remains intact, this death from the top down appears to be due to desiccation. Only the trees that are in that final line of available moisture are able to grow this tall. If they have one dry year, and then one intensely hot summer, there will not be enough moisture to survive. 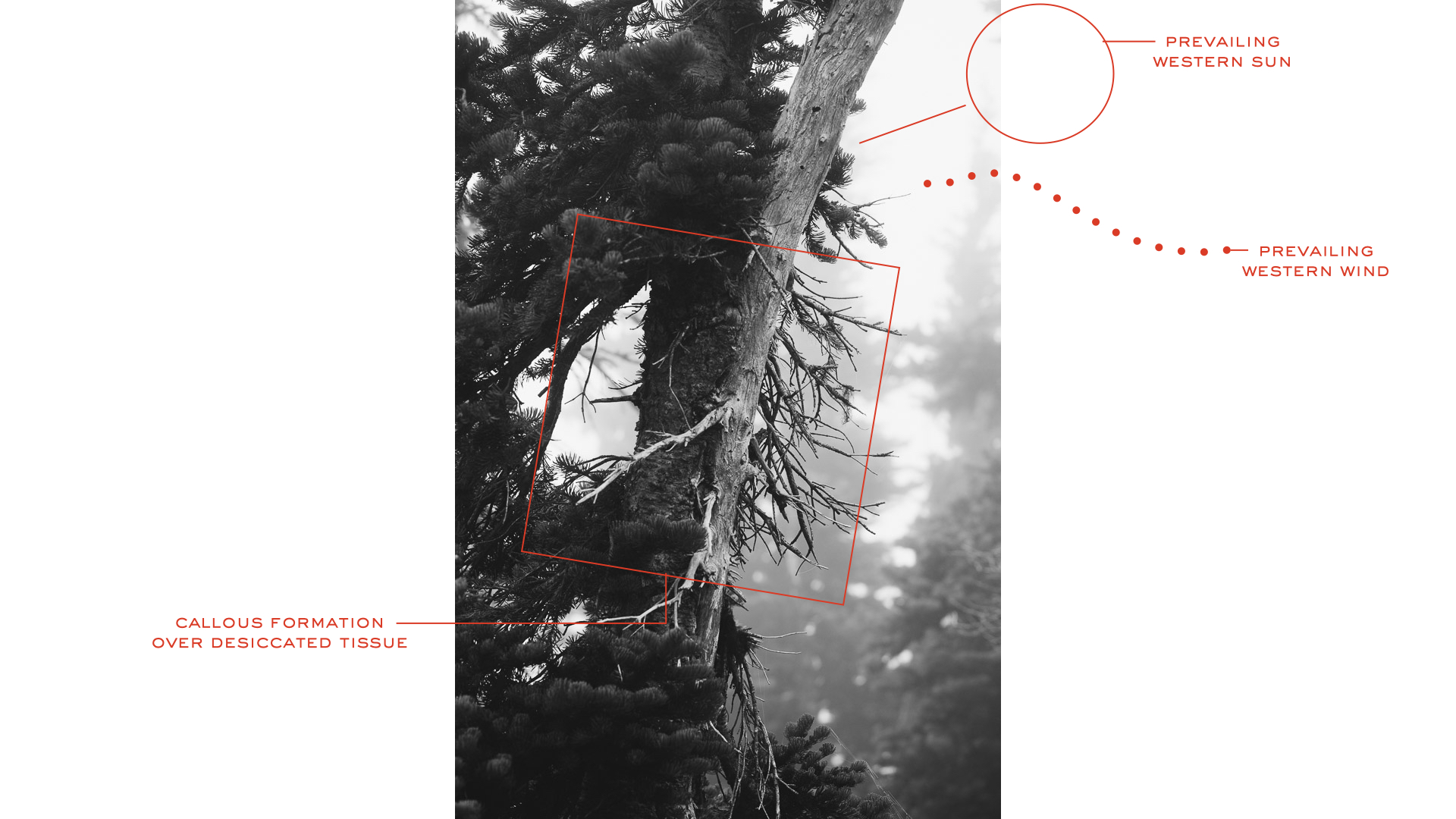 This branch shows the role of the callus, and the subalpine fir’s capacity to compartmentalize. The branches are still cylindrically intact, indicating a loss of water flow on the westward facing side of the branch caused its desiccation. 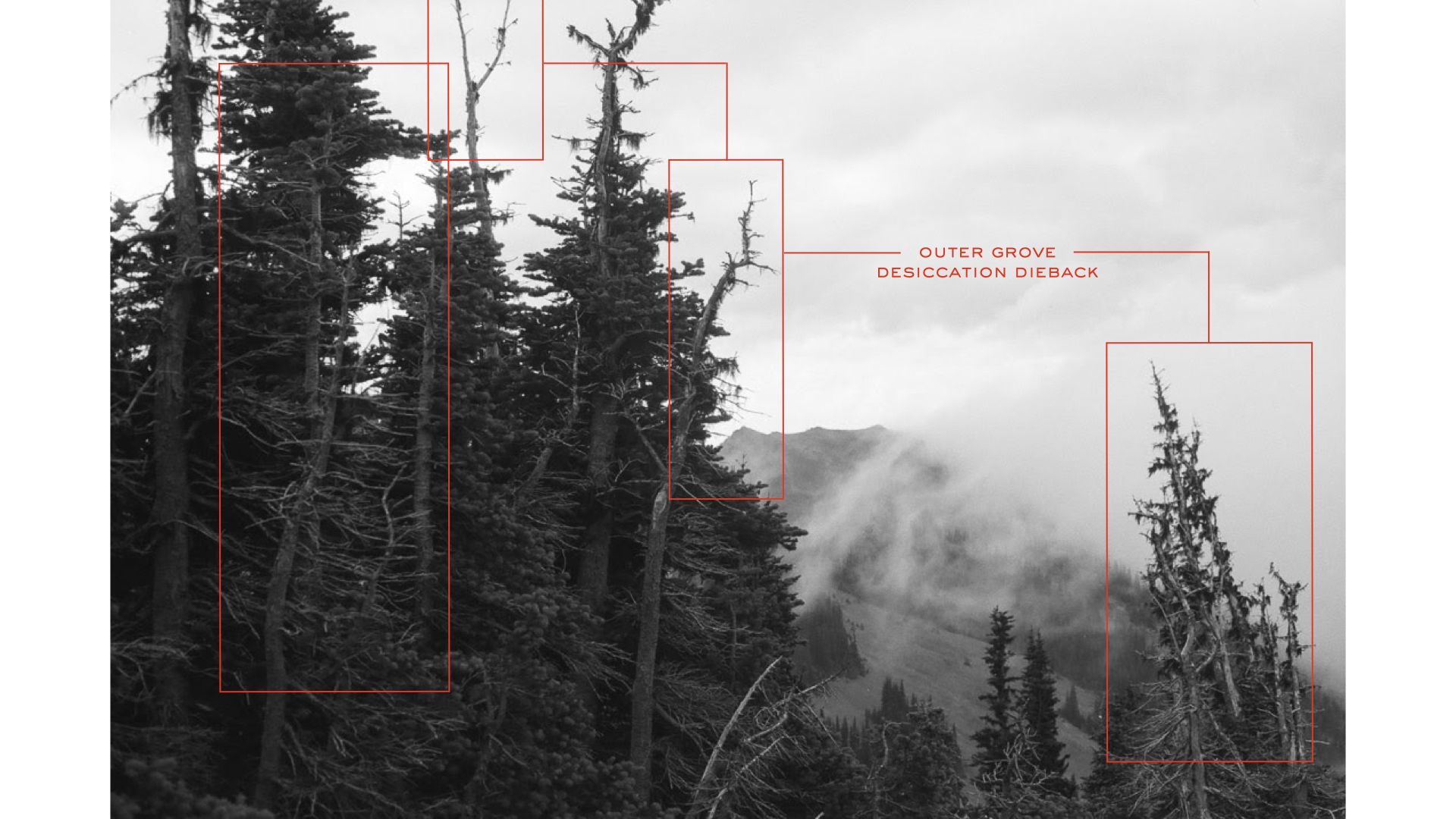 A drought ridden summer, or a substantial heat event likely caused the desiccation and death of every tree on this side of the grove, and still, their structure remained intact. 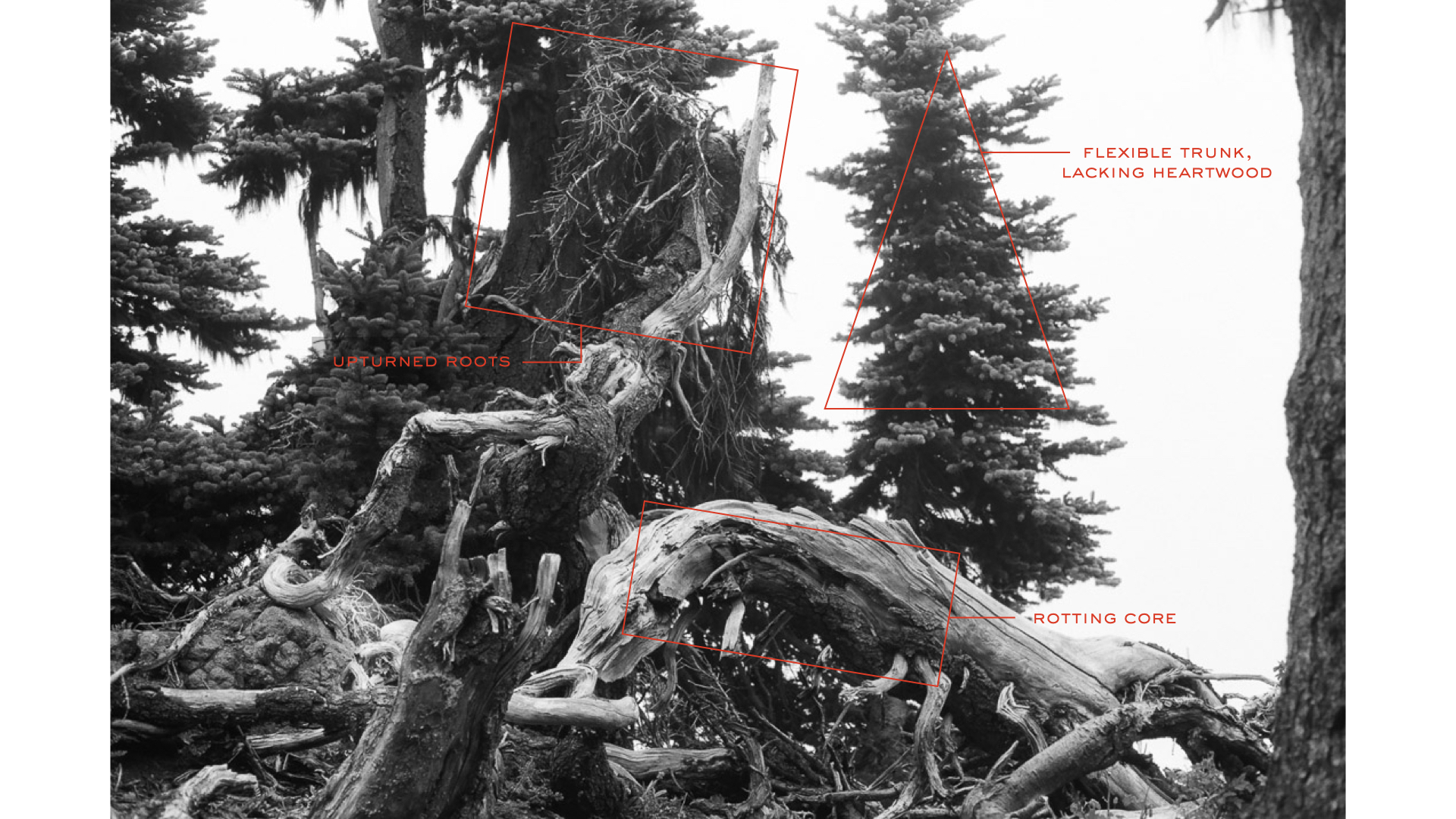 The subalpine fir is known for its flexibility, but in turn makes the wood susceptible to rot when moisture is no longer moving through the tree. This is an upturned root system from a tree that dehydrated and died. As the roots receded over time, the rot eventually worked its way out of the central core of the wood. 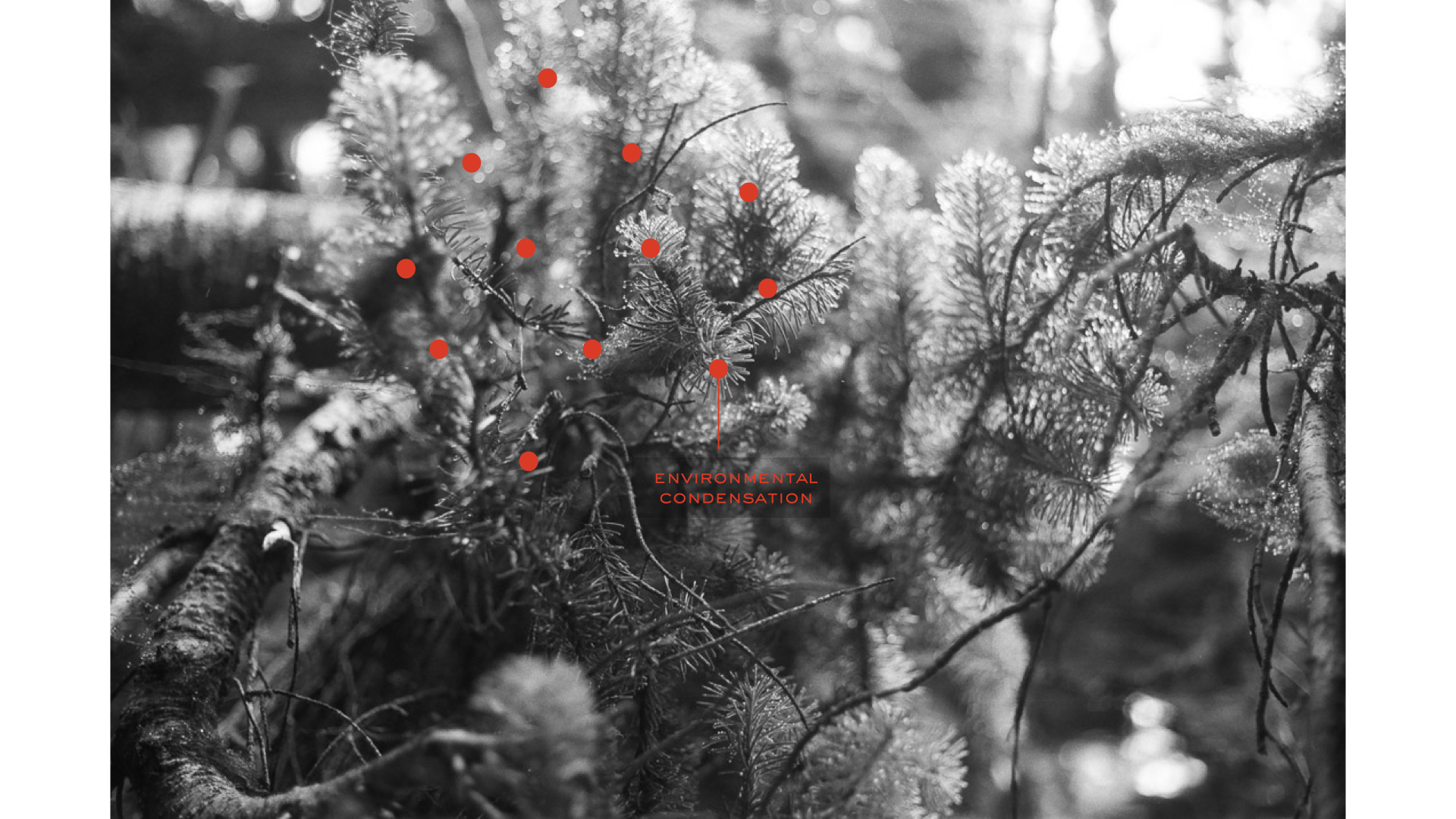 The foliage of subalpine fir is almost succulent in its water content and fleshiness, and the pace at which they transpire and lose water makes ample moisture crucial to survival.

In this study of the subalpine forest region of the Olympic Mountains, we notice a distinct tradeoff between malleability and longevity in the subalpine fir. Understanding how these conditions impact the aesthetic of the trees as they age is key to informing bonsai design that is reflective of the native environment and creates an emotional connection between viewer and tree. 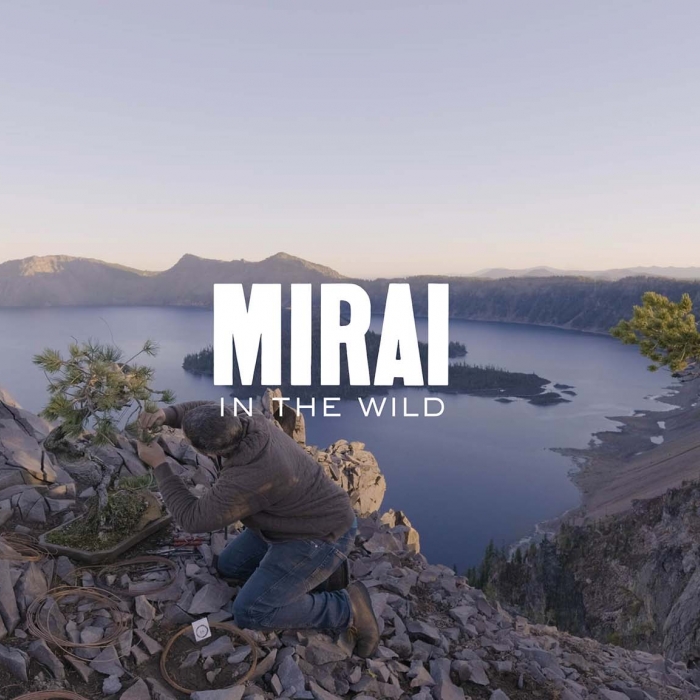 Mirai in the Wild: Crater Lake 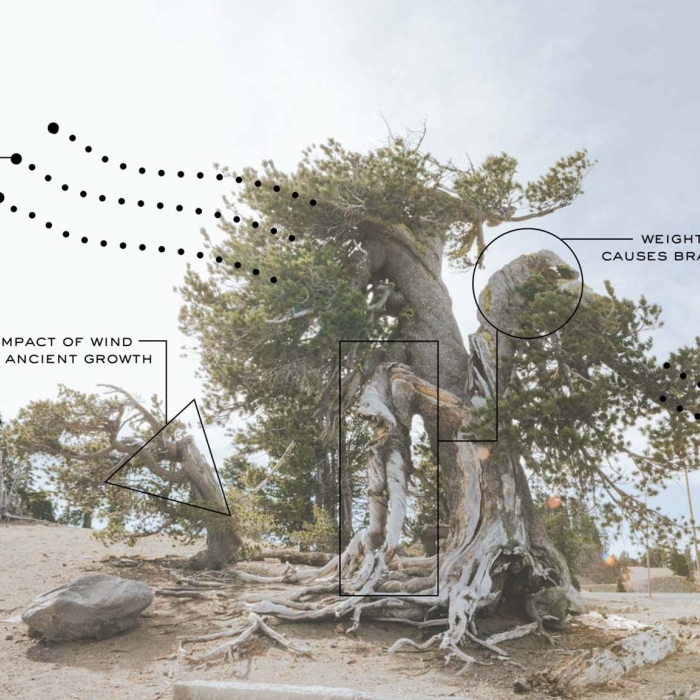 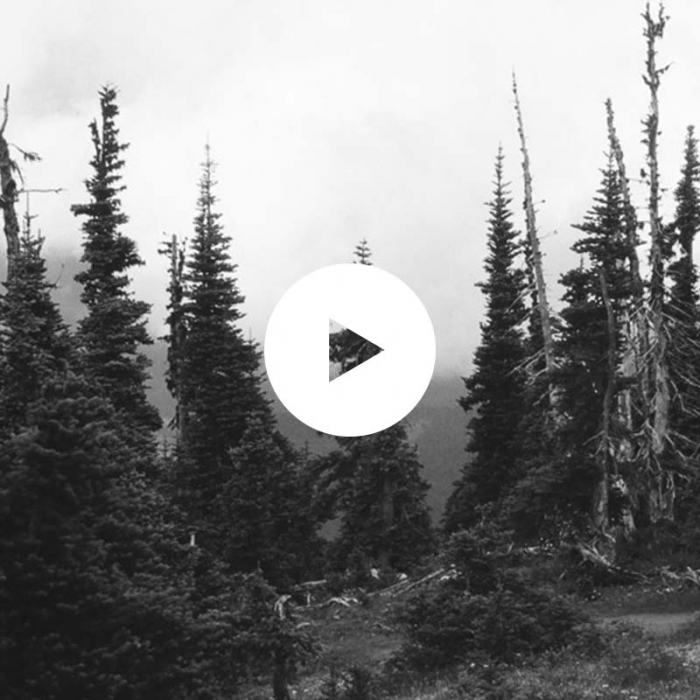